Uk Surges Ahead With Challenger 2 Upgrade

Well look at it like this. The company doing this is German. If they can get the British on board for this, and you are probably still talking about 200 tanks, then you have a base for saying that further production is going to get costs down. you only need one of the other users of the Leopard 2, of which there are number in Europe, to suddenly make this look like the option to go for. You dont need one tank fleet, just just need a couple taking it on and suddenly it looks like a good option.

For the French to succeed, they have to demonstrate a turret that can fit on most European chassis, and a viable autoloader for the 140mm. Whether there are flaws in the Rhinemetall proposal, i cannot say, but it rather looks like they have both, whereas the French as far as I can tell have not.

From news reports ive read, it seemed Rhinemetall were looking for production capacity in the UK. Which if so is going to do quite a lot to swing opinion towards them. It also begs the question why they need further production capacity, unless they think they have a fair swing of using it.

Is there flaws in my logic? Probably. Im assuming the world makes sense, when of course frequently these days it does not.

The UK being first to use the 130mm when it's struggling to budget literally everything? Sorry but I'm not biting. It has reduced the number of upgraded tanks from 400 to 200 down to ~100 due to costs. Rheinmetall didn't even win the tender yet, especially with their smoothbore gun offer. So that's a solid no from me.

Well it's no secret, Challenger 2 of all the NATO tanks most urgently needs updating. Leopard2A6 can go a few years without needing it, so does M1A2. That doesn't mean this is the option that will be chosen, and I've similar misgivings to yourself about the new defence review. I'm just saying, if they want to start the ball rolling, it's probably the place to start. We will have to buy something in the end.

"Rheinmetall" has essentially won the bid because the joint venture company with BAE Systems is the only option and they've withdrawn the original BAE offering. I suppose the 130mm version is the "ultimate" upgrade option - if they're using the existing turret and the ammunition fits then it might be cheaper in the initial procurement to go this route rather than replace the turret for the 120mm.

it's difficult to see how a single piece combustible case 130mm round would fit in a CR2 turret - this was always a problem for the smaller 120mm ammunition and I doubt that the 130mm is any shorter.

There previous option offered if you remember was using a new turret utilizing the original armour, the new turret being built from the start as a plugin to utilize the 120mm Rheinmetall gun. This from the sights looks very much like the same turret, albeit with a new armour pack on it. Its certainly at its basis a Challenger 2 turret,you can tell by the loaders episcope and the commanders cupola. I think they could put in an ammunition bustle if they gutted the rear of the turret, which we speculated on before. If they are designing a new turret from the ground up, that is obviously easier.

How much room does the autoloader take up? Ive no idea, it would be helpful to know whether its based on a naval design. We seem to be ablet to design fairly compact autoloaders to fit in naval turret, It may be this one has a similar lineage.

The wiki article on this weapon is interesting.

Rheinmetall introduced a larger Rh-130 130 mm L/51 tank gun at Eurosatory 2016 in June 2016. Development commenced in 2015, financed entirely using internal funding, as a response to the Russian introduction of new generation armored vehicles like the T-14 Armata tank, and the first technical demonstrator (TD) was completed in May 2016. The new 130 mm gun has an L/51 chrome-lined smoothbore barrel with a vertical sliding breech mechanism, increased chamber volume, no muzzle brake, a thermal sleeve, and a muzzle reference system (MRS) enabling it to be boresighted on a more regular basis without the crew needing to leave the platform. Compared to the 2700 kg 120 mm gun, the 130 mm has a 1,400 kg (3,100 lb) barrel and an all-up weight of 3000 kg including the recoil system.

Rheinmetall is developing a new generation APFSDS round featuring a semi-combustible cartridge case, new propellant, and new advanced long rod tungsten penetrator as well as a high-explosive air-bursting munition (HE ABM) based on the 120 mm DM11 HE ABM in parallel with the gun; the cartridges are 30 kg (66 lb) and 1.3 m (4.3 ft) long with, according to the company, the increase of 8% in caliber resulting in 50% more kinetic energy over the 120 mm gun.[43]

Engineers believe the weapon can only be used with an automatic loader and new turret design. The gun commenced static firing trials at Rheinmetall's proving ground following Eurosatory, while engineers hope to receive a new NATO standard by the end of 2016, although development of the gun and ammunition will likely take 8–10 years. The 130 mm is designed to equip the Main Ground Combat System (MGCS), a joint effort between Germany and France to produce a successor to the Leopard 2 and Leclerc, possibly to be launched between 2025–2030.[44][45][46] Rheinmetall has also mounted the gun to Challenger 2 meaning it could be a possible option for the Challenger 2 Life Extension Program (LEP) [47]

I am not sure T-14 Armata is armoured to such extent that it requires 130mm. Plus hit to weakly armoured remote turret is going to be mission kill anyway, IMHO.

The turret probably isnt. The hull probably is, after all, where else do they have to put the armour? Even if you kill the tank, the crew survives and they can pull a T72B out of reserves and you have to start again.

As for the turret, its a small target, smaller than your average turret self evidently, and its not clear its going to be easy to hit with anything other than perhaps an autotrack. Maybe not even then. And what if they buy lots of plug ins so they can replace the mechanism inside an hour by lifting the turret?

I think personally that T90 and later mods of the T72's are enough of a threat to warrant a new gun. And if it defeats Armata and anything the Chinese might be developing as well, its all to the good.

I am just not sure about autoloader, since that'd probably drop crew to 3...and that itself has been noted to cause trouble with field maintenance, entry duty etc.

Tank has lot other things to consider than just fighting.

It means the MOD can cut our tank crews by a third. Much win!

Im not so sure those arguments stand up so much anymore. If there is a problem, you put extra people in the REME detachment to help out. Or look at it as an opportunity, retain the crewmen you would have lost, and train them in other crew roles. Carry them around in an apc as remounts, and they can help out with crew maintenance.

Lets face it, its nothing we wont have to face far more extensively when we finally develop drone tanks. Which assuredly are coming whether we want them or not.

There previous option offered if you remember was using a new turret utilizing the original armour, the new turret being built from the start as a plugin to utilize the 120mm Rheinmetall gun. This from the sights looks very much like the same turret, albeit with a new armour pack on it. Its certainly at its basis a Challenger 2 turret,you can tell by the loaders episcope and the commanders cupola. I think they could put in an ammunition bustle if they gutted the rear of the turret, which we speculated on before. If they are designing a new turret from the ground up, that is obviously easier.

That is still the current option. The 130 mm L/51 smoothbore gun is not offered, it would not be ready by the Challenger 2 LEP's deadline and is only mounted on the turret for test purposes. There is no coaxial machine gun, still a loader's hatch (despite the turret featuring an autoloader), armor coverage is inhomogenous and smoke grenade dischargers are also gun... it is not a production turret.

Ok point taken, its not possible at this moment in time. But seeing as they seem to be using a similar turret as the previous concept they have offered, it presumably does offer a modular approach they can use later if they see fit. Perhaps as an alternative to the Franco German project. I find this fascinating that they use this vehicle, rather than say, a Leopard 2, for which presumably there is a far bigger market. That must have been done for a reason. 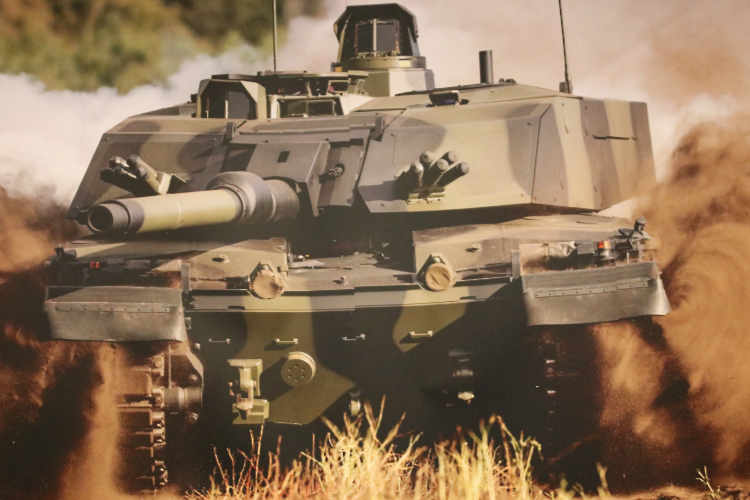 The Challenger is already at a very advanced stage in its lifetime. Making yet another substantial turret upgrade is probably not under consideration.

One more factor that wasn't considered here yet, is the pressure that other countries might put on the UK. It can come from all directions, even only customers.
With the French working on a 140mm as a competitor to be tested against the 130mm later, the west may prefer the UK stay away from dictating a standard that none has agreed on yet.

There is a genuinely hilarious thread on ARRSE about all this, lest we start taking ourselves too seriously.

Hopefully not to drag things off topic but does anyone believe this 130mm development will result in the widely talked and theorised about 152mm smoothbore gun finally being fitted to the T-14 Armata in more than just a trial vehicle or two?  Will this 130mm (should it ever actually be fielded in any numbers) have any effect at all on the Russian and/or Chinese top-line MBT projects?

I think they will wait to see if its fielded first. They have having enough of a job getting Armata into service, let alone do stuff like that with it. Ive no doubt its within their capacity eventually of course. Im not sure how useful it would be.

I think it would have no effect on the 152mm gun project. However, Russia may seek to acquire a new gun no bigger than 135mm.
The 140mm already pushed a lot of limits. A 152mm would break the tank's balance completely.

Well, the driver for a move to a (more powerful) gun is driven by the need to penetrate higher protection levels, not by how big the other guy's gun is.

Western tank's protection levels have only modestly increased since the end of the cold war, if at all. And its not as if the new 125mm gun isnt comparable to the rheinmetall 120mm anyway.