Whilst not the QE, its French counterpart the Charles de Gaulle has appeared several times in this thread. The Marine Nationale put a new video of the CdG on YouTube, showing the carrier and its insides after its recent refit.

leaving aside some questions about how cleared of flammable materials the ship was at the time of the engagement, the initial missile strike severed the water main that was to be used for fire-fighting. If there was only one of these available, or the design was such that the damage control systems were not redundant, the quality of the damage control crews becomes irrelevant - they no longer have the tools available to control the fire anyway.

Sheffield floated for several days after the fire was finally extinguished and was taken under tow for the long voyage home. Unfortunately, the weather turned bad and it was not considered to be safe to attempt to continue the salvage. From the imagery of the damage sustained, if she wasn't written off it would have been a purely national pride decision to rebuild her - more like cutting out the ship's name and sticking it on a new ship.

To dominate any kind of sea you need a diverse groups of warships and air/space search platforms working as a team . SSN/SSGN under the horizon search for surface and sub contacts and liaise through VLF coms to MPA and networked to battle groups. The only way such Battle Groups can successfully survive and function in hostile seas is if they have adequate network /over the horizon passive surveillance from all ships plus AWACS air cover.

Some kind of aircraft carrier seems needed....minimum should be those Japanese DDGH [20kt or more].

It really comes down to what you mean by "dominate", what the purpose of dominating that area of sea is, how large an area of sea, how close it is to hostile land territory, what level of casualties you are willing to accept in achieving your desired level of domination. etc.  I am really struggling to come up with a scenario where the UK would need to dominate an area of ocean, let alone one would require an aircraft carrier.

The Prime Minister announced today that the Royal Navy will ready the UK’s largest and most advanced warship ever to join allies in forming part of NATO’s major ‘Readiness Initiative’ when she becomes operational.

The first of the UK’s Queen Elizabeth class aircraft carriers, together with the formidable F-35 fighter jets, will fly the flag of a Global Britain alongside NATO allies, projecting influence for peace and standing ready to fight, deliver aid and take on terrorism around the world.

I’m pleased to announce that NATO will soon be able to call on the UK’s Queen Elizabeth class aircraft carriers and F-35 fighter jets to help tackle threats around the world.

NATO’s ‘Readiness Initiative’ aims to improve the readiness of the alliance’s forces to deploy and move within Europe and across the Atlantic to safeguard international security. The UK will look to make its aircraft carrier a key part of those plans as the country continues to play a leading role in the alliance which has been the cornerstone of its defence for 70 years.

Be it projecting influence for peace, standing ready to fight, or delivering vital aid around the world, HMS Queen Elizabeth and her sister ship HMS Prince of Wales, will fly the flag of a Global Britain. Nothing symbolises the leading role that we play in NATO more than our nation’s future flagship being ready to respond to any challenge that the Alliance may face.

At the Defence Ministers’ meeting in June, Allies committed, by 2020, to having 30 battalions, 30 air squadrons, and 30 naval combat vessels ready to use within 30 days. This was reinforced by Allied Heads of State and Government at the NATO Summit in July.

HMS Queen Elizabeth remains set to be deployed on global operations from 2021 and when HMS Prince of Wales joins her in the fleet in the near future, the UK will have one carrier available at very high readiness at all times.

the UK will have one carrier available at very high readiness at all times.

Or until the next cuts in the defense budget.

Well I can be a cynical as the best of them on that. But I think a moment of inevitability is coming, when we can no longer keep putting on the pretense there are no threats, and we can rely on Europe and America to deal with our problems. Personally, I think in all the senior military men, and in a lot of politicians, we crossed that point a long time ago. The only obstacle has been the Chancellor, who probably should have been replaced a good 3 years ago. Roughly around the time he got the job really.

We have to stop being so cynical and start being optimistic. I woke up this morning coughing up blood, so I know of what I speak.

RAF F35's deploy to Cyprus. Although we arent going to kill anyone with them, yet.

RAF use F35 operationally. So I guess someone was fibbing then.

Britain's new F35 fighter jets have been used on operations for the first time, Defence Secretary Penny Mordaunt has revealed.

The first operational sorties were flown on June 16 from RAF Akrotiri in Cyprus, targeting the last remnants of the Islamic State of Iraq and the Levant (Isil).

The six stealth fighters based in Cyprus have conducted a total of 14 operational sorties over Syria and Iraq following a six-week training deployment in the country from May.

Speaking after sitting in the cockpit of the one of jets, Ms Mordaunt said: "I am very proud that these are now flying in defence and are projecting the UK's national interest.

"This is a fantastic new aircraft, it is amazing. It's doing so well out here on these operations... it's a really historic moment."

The F-35 aircraft have operated alongside Typhoon fighters on “armed overwatch” missions. So far the F-35s have not dropped any of the Paveway IV laser-guided bombs they have been carrying.

The new mission will be only a short-term addition to the air forces operating against Isil. The stealth fighters are due to return to their home base at RAF Marham, Norfolk, in July.

An MoD spokesman told the Telegraph that the “proof of concept” deployment of the aircraft from 617 Squadron to Cyprus had gone well.

“They have been patrolling, watching and listening,” the spokesman said, “hoovering up information” on every sortie.

Group Captain Jonny Moreton, the Commanding Officer of 903 Expeditionary Air Wing based at RAF Akrotiri, said there had yet to be any requirement for the F-35s to attack.

"We haven't dropped any weapons from Typhoon in that period either," he added. "It is not a very kinetic phase of the operation at the moment."

Britain currently has 17 F-35Bs - the short take-off and vertical landing variant of the fighters - and has committed £9.1 billion to buy the first 48 aircraft.

The MoD has said it will buy a total of 138 jets, but no decision has yet been taken on which variants will make up the remaining batch.

Note that the F-35s are operating from a land base, not a carrier which, had one been available, would have just made the whole enterprise a lot more risky and expensive.

Historically, Cyprus has had no issues with the RAF carrying out offensive operations from it's soil?

Note that the F-35s are operating from a land base, not a carrier which, had one been available, would have just made the whole enterprise a lot more risky and expensive.

What happens if we lose Cyprus? We very nearly did in 1974. We have been holding onto that on a prayer for years, politically sooner or later time will run out on it.

A hull give us the assurance of an airbase whereever we want it. The days when the red bits on the map that gave us secure airfields are long over.

Quite an impressive looking ship. 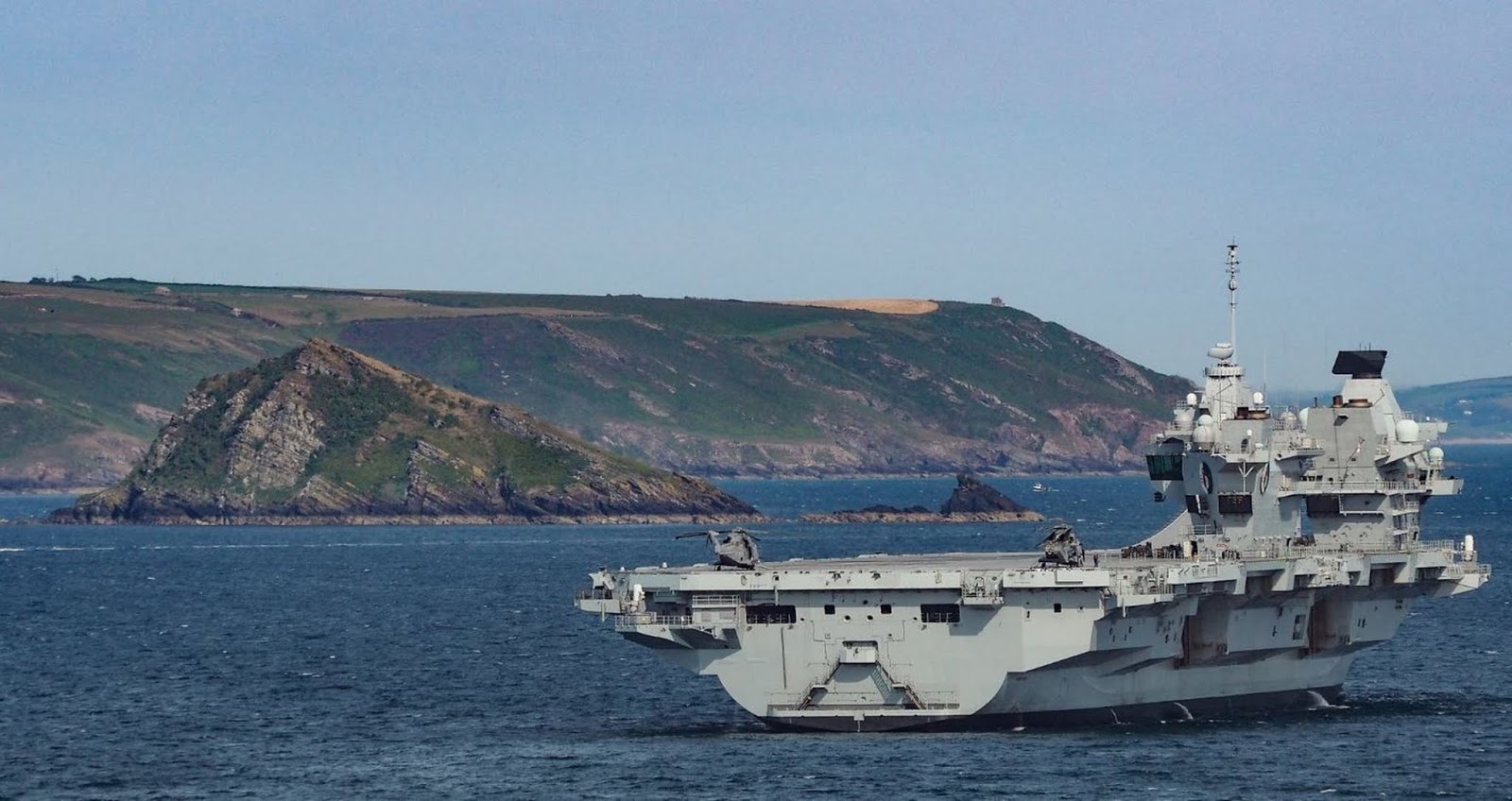 A friend of mine lives near southampton and he can always see it when it comes in. I keep hoping it will make a trip to avonmouth so I can go and see it.

Under evaluation by FOST to see if she is suitable for deployment to the US again apparently.

Taking part in exercise Westlant 19, so it will be interesting to see if we will see any Leathernecks land on.

Oh it works fine. I have a motorcycle ash tray that's every bit as flawlessly reliable

Could it be (GASP) an intelligent MOD Procurement! Say it isnt so!

A highly intelligently managed procurement of something we did not need

It rather explains how we got it. If we had gone with the more complicated options, such as a electromagnetic catapult, we probably would be 2 or three times over budget. The only problem comes if F35B doesnt come right. it still little more than a prototype yet.

Ahem. Sorry chaps, but I may have put the mockers on it.

It seems that there was a major propulsion system failure which resulted in an unscheduled stop outside Plymouth (it's too deep a draught to actually get inside), followed by a significant water leak that may have flooded a couple of compartments from a sea water main, but the MoD isn't saying much - the latter probably wouln't have got out at all except that it resulted in the cancelling of a press tour.

Well that's disappointing but its what sea trials are for. Hopefully not a long term fix up.