Brought a tear to my eyes. 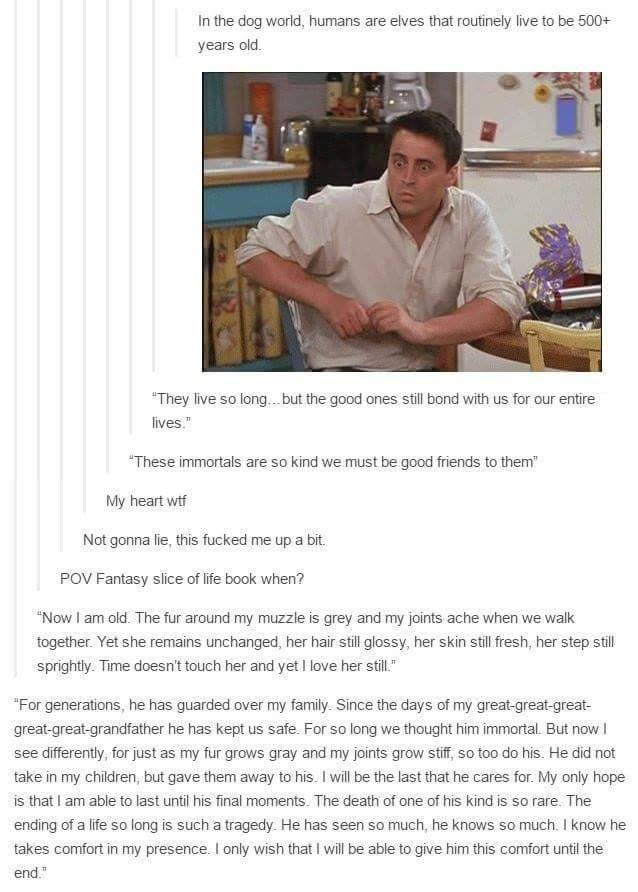 20 Official, word is he did 25 more that were not credited.  I really am attached to the dogs.  They only ask for food, water, a warm blanket and a snuggle.

20 Official, word is he did 25 more that were not credited.  I really am attached to the dogs.  They only ask for food, water, a warm blanket and a snuggle.

Well, in his prime, my miniature dachshund  thought my purpose in life was to throw a racquetball. Repeatedly.

II have the little one on the chair with me, and the Golden is asleep on the sofa.  They got their "dog cookies" this morning for being goof girls and going outside to take care of business.  Now they are asleep after a hard night of sleeping.

The only down side of a long hair gold retriever is the shedding.  I don't see how the dog has any hair left!

Increasiing my carbon footprint while destroying the environment

I still can't figure out why there is a pile of dog hair under my couch, the dog is too big to fit under there.....

With all the hair we trap in the vacuum I could make another dog every few weeks.

With all the hair we trap in the vacuum I could make another dog every few weeks.

I have never been a full time carer for a dog, circumstances have not allowed it, but dogs seem to like me.

I walk a neighbour's dog, a King Charles/something bigger cross.  A cheeky bugger that goes by the unlikely name of, well, Charlie.

Charlie has lived for years with a cat - a somewhat strange ginger female - nearly all ginger cats are male.Named Honey

But just over a year ago a new katten moved in, a black and white male tom, named, once again unlikely, Thomas.  Thomas and Charlie are great mates, play fighting and having much fun together.

Here is the hook though: the critters' 'mum' has found Charlie the dog to be chewing satchets and the small trays of pet food when she wakes up or gets home.  They were stored where the dog could not get to them, but Thomas the cat could: the two of them worked out that Thomas should get them from storage and Charlie the cat chew them open for them both.

This weekend I went to a fund raiser for a bulldog rescue at a craft brewery in St Louis with some friends. Great beer, great food, wonderful puppies. The one in the picture was an 18 month old female that every male bulldog in the building was trying to get to. She was quite popular., 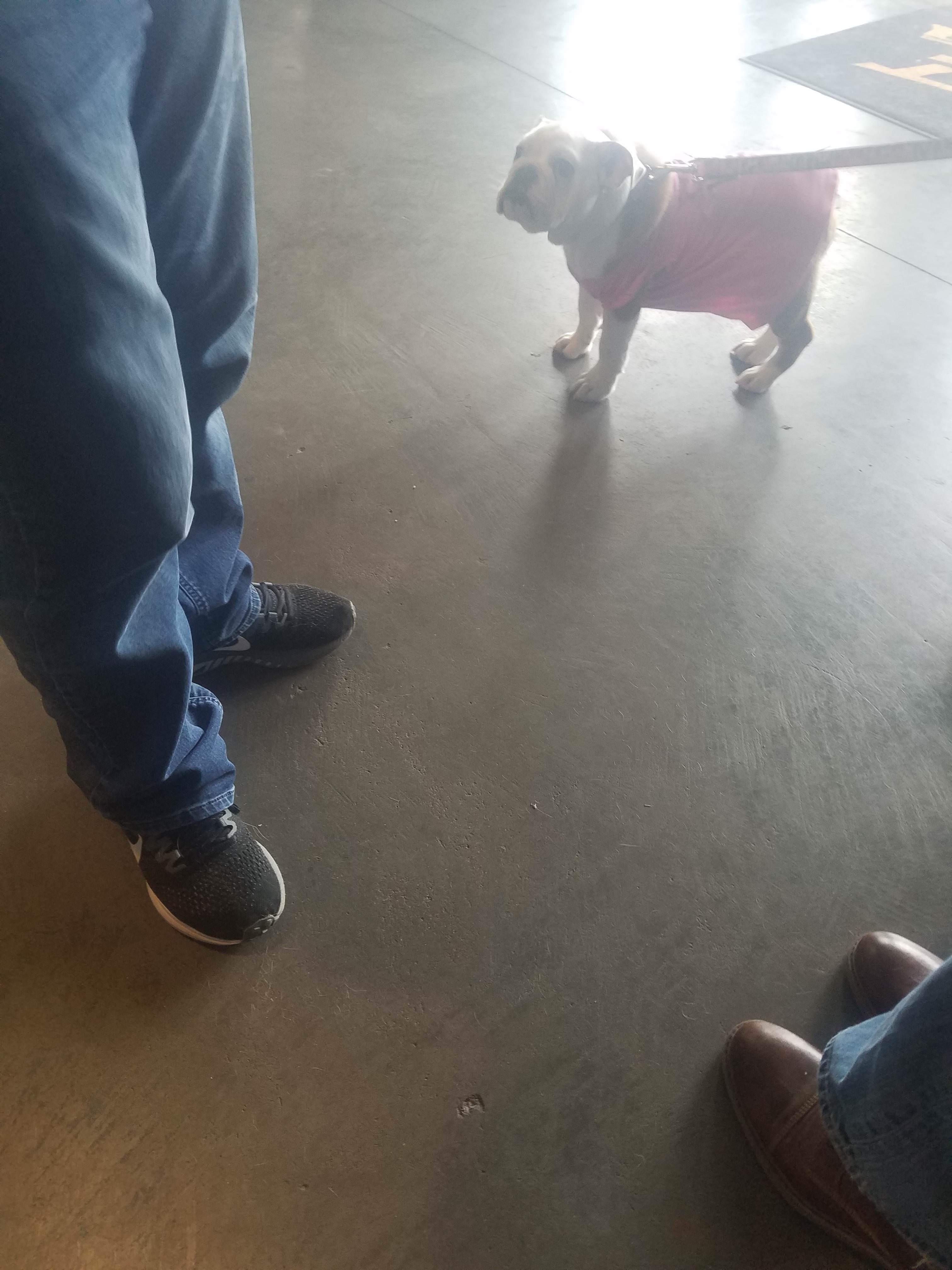 Australia: Even the plankton are man eaters!

May God bless these two creatures and unite them with their owner.

An old man dies. Alone except for his two old dogs, Indigo and Blue.

They stayed by his side for weeks until his body is found.

It's the sort of tragic story that makes people wonder how it could happen, and often ends sadly for all involved — including the faithful pets.

That was the scenario faced by Tasmania Police when they entered a property in the north of the state to check on the welfare of the occupant.

While nothing could be done for the elderly owner, the police called the local dog catcher, Des, who "has a way with animals" according to Emma Haswell, the founder of Brightside Farm Sanctuary.

Des called Ms Haswell, who had already heard about the dogs.

"The owner had died, and no-one knew, and he had been dead for two weeks when the police found him," she said.

"His two dear old dogs protected him and wouldn't let the police go near him, they were guarding their owner.

"It would have been very stressful for the dogs and very difficult for them when the police came in and they didn't know what was going on. They were very, very protective. Apparently the police weren't game to go near them.

"Nobody from the family could or would take them, so their future was looking pretty grim, so I said I would [find them a new home]."

The two old dogs are believed to be 10 and 12 years old, and Ms Haswell said it was likely they would have been euthanased.

Photo: The dogs have settled into their new home together. (Supplied: Brightside Farm Sanctuary)

"I was amazed. They were the most beautiful dogs. They were adored. You just want to squeeze them," she said.

"They are mother and daughter, so the [red] heeler is the mother, and the kelpie-cross is the daughter.

"When I took them to their new home, I took them out into the garden to explore and it was just gorgeous. The daughter kept looking back and checking on the mother as they wandered around — they're really bonded.

"They're well cared for and in good health."

It's not always easy to find the right home for older dogs. They often have complicated and expensive medical problems.

A friend of Ms Haswell's was sceptical when she said she was going to find them beautiful homes.

"And I rang her about five hours later and said 'Guess what? they've got the best home!' and it's with an incredibly good vet who does mainstream vet work, but also does acupuncture and all those things," Ms Haswell said.

"She took another old dog from me once before … a 10-year-old shepherd that had been left out the back of a fish and chip shop and had been in a terrible state of ill health — he could hardly walk.

"And he looked and behaved like a five-year-old dog by the time she had finished with him."

Ms Haswell said it was a good story among those of the swathes of abandoned and unwanted animals that people want her to take each week.

"Just pages of animal surrenders for the past six weeks — it's just insane. Every day getting numerous calls about dogs, heaps of rabbits, guinea pigs — it's very difficult when you can't say yes to them all," she said.

"It's nice when you can just pluck some animals out of something awful and just transfer them straight into paradise, it's just a really good feeling."

Can't live with them, can't bury them under the patio...

Cheers for putting up the story about the old dogs Doug, quite heartwarming bless them.

Can't live with them, can't bury them under the patio...

Cheers for putting up the story about the old dogs Doug, quite heartwarming bless them.

By the way, a photo that was missed:

The book of Isaiah mentions lions and lambs, and children with snakes: I know of a student minister who wrote an essay on the place of animals in the kingdom of heaven.  Surely the expressions on these two is an affirmation of that.

Mine are really looking old, and they sleep a lot more now.  I know how they feel after this last birthday.

And more on why we love them: https://pjmedia.com/...ustralian-bush/   A partially blind, totally deaf 17 year old heeler stayed with and protected a 3 year old who wandered off into the Australian bush.