Finally! New Us Round Adopted?

25 replies to this topic

Finally! It seems the Hornady 6 mm ARC is adopted.

Who is making the firearms for it?  How soon can I get a upper for my AR?

Hornady the company I heard makes good ammo. I still have to test a batch myself.

I'm curious if anybody else has tested Hornady 5.56 through their ARs?

Finally! It seems the Hornady 6 mm ARC is adopted.

Been at least 15 days since a new US round was announced.

The only new rounds I've heard of recently (as far as military adoption) are 6.5mm Creedmore and the still-developmental 6.8mm.

Adopted for SF only I presume?

As stated, it's not been adopted by any country/org/department.  That cartridge has been around for a long time as a wildcat.  With Hornady behind it now I'm sure it will gain in popularity in the civilian market.  There's been some demand for an alternative cartridge for the AR-15 platform for some time and so far none seem to really scratch that itch.  Speaking of the civilian market in the U.S. the 6.8spc was the first one to pick up steam.  Then came the 6.5 Grendel although it's growth in popularity has been slow.  224 Valkyrie burst into the scenes in a big way when it was introduced but its too much of a specialty cartridge in my opinion, requiring a very fast twist and from I've read and talked to others that have it, it can be difficult tune... and you really have a limited selection of suitable bullets.. all of this being related to the high twist (1 in 6.5").

I built a 6.5 Grendel years ago, for the sole purpose of hitting steel targets at 750 yards from a bench.  It worked quite well for that.  Ive taken it out to 1000 yards and have been able to score consistent hits on a 2 moa steel plate at that distance.  There's enough energy to move the plate (something 556 has trouble with beyond 500 yards) or spot your misses.  This is using hand loaded ammunition shooting a 123gr bullet ~2500 fps.

I'm sure this "new" 6mm Grendel will do well, but for military use it shares the same problem that the Grendel and some of these other cartridges have.  There is not enough meat on the bolt head.  Reports of grendel bolt heads shearing lugs while not common certainly isn't unheard of.  It happened to me once: 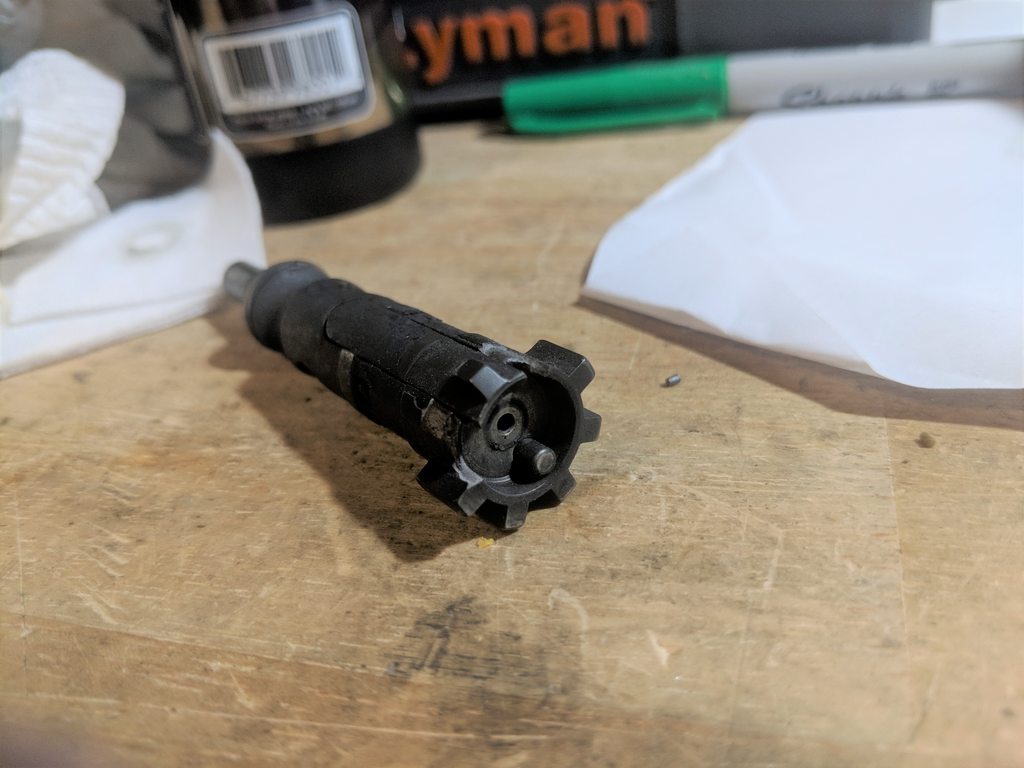 Notice how thin the walls are.  Compare that to a 556 bolt.. its a significant difference.  Now maybe my bolt wasn't up to task but this bolt was matched to my barrel from a company that has a decent rep (Lilja).  Maybe my loads were too hot but I was well under book max and the stated velocity of 2500 fps for a 123gr bullet is pretty standard.  This happened to me during a Texas winter.. so no over pressure from warm ammo.  Given that the Grendel is a low pressure round as it is (50,000 psi iirc) I consider this a weak spot for the cartridge.  This new 6mm ARC/Grendel is going to have a similar bolt head.  This is also an issue from ARs chambered in 7.62x39.

Bottom line.. the AR platform was designed for 556, so squeezing anything else in there is a compromise.

In regards to mags, I use 6.5 grendel mags.  AR Stoner and Alexander Arms.  They look like the standard metal 556 mags but the follower and opening are a little different.  Never had a feeding issue... but of coarse I don't really push this rifle too hard.  YMMV.

Who is making the firearms for it?  How soon can I get a upper for my AR?

Hornady the company I heard makes good ammo. I still have to test a batch myself.

I'm curious if anybody else has tested Hornady 5.56 through their ARs?

Hornady ammo is decent if not a bit expensive.  I've shot both hornady 223 and 6.5 grendel through my two ARs.  You'll probably see wolf release some.

Since the cartridge is now standardized, reamers are available and you'll be able to get reloading dies and brass.  Will a major gun manufacture put out a rifle chambered in 6 arc?  If it becomes popular in prs matches they will.  If not it will be another in a long line of "reloader" cartridges.

It's hard to tell which cartridges will catch on. .224 Valkyrie was supposed to be the "next big thing" but you don't hear anything about it nowadays.

Yea.. my neighbor is in the process of building one (224 Valkyrie).  A small local gun shop owner that I buy powder from has one and swears by it.  It had a ridiculous amount of hype when it came out.. then all the problems with accuracy started being reported by users with 1-7 barrels (not to mention super short brass life).  It was billed as a 1200 yard round for the ar-15, and while on paper it can do it... good luck seeing the impacts of a ~90gr 224 bullet at 1200 yards.  I think for "long" range the 6.5 grendel is still probably the best option but I'd be lying if I said this 6 arc doesn't intrigue me.  If I were building one today.. I'd be tempted to try the 6 arc.  One advantage to reloading is that it doesn't really matter if a round becomes popular or not.  The "other" hornady case I've been eyeballing is the 6.5 prc..

A lot of good civilian cartridges do not translate well into military use - 6.5mm Grendel required case strengthening in order to work reliably in the automatic vs semi-automatic weapons.

Bolts are a wear item, even with 5.56 you break them routinely.  More so with highly gassed, high heat situations running higher pressures and thus bolt thrusts.  Seems interesting, I might get one eventually.  S/F....Ken M

Well yes, I have no shortage of AR's in various flavors. Given that the 88-90gn 22 cal bullets are about the same BC as 105-108gn 6mm bullets, this buys you 75-100fps over the 224 Val with the same BC, and more bullet mass.  A marginal but definate improvement, which makes sense in that there is only so much that can be done within a given volume of case capacity and OAL.  S/F....Ken M

On paper, the 6mm SPC wildcats look interesting to me, but geez that looks like a real uphill climb compared to just going with 6.8.

Hornady's promo. Turns out that it's more effective than 120mm APFSDS and most JDAM variants:

JamesR, what was the barrel length on your grendels rifle?

Hornady's promo. Turns out that it's more effective than 120mm APFSDS and most JDAM variants:

The Navy needs to be apprised. Such a round will revolutionize surface warfare. Instead of those inefficient old 5 inch gun rounds, a Burke-class destroyer could carry Nx105 rounds of 6mm ARC.

At first I thought this was just 6mm AR put into production (Grendel necked down to 6mm), but the cartridge dimensions are all slightly smaller than the Grendel.  Interesting. 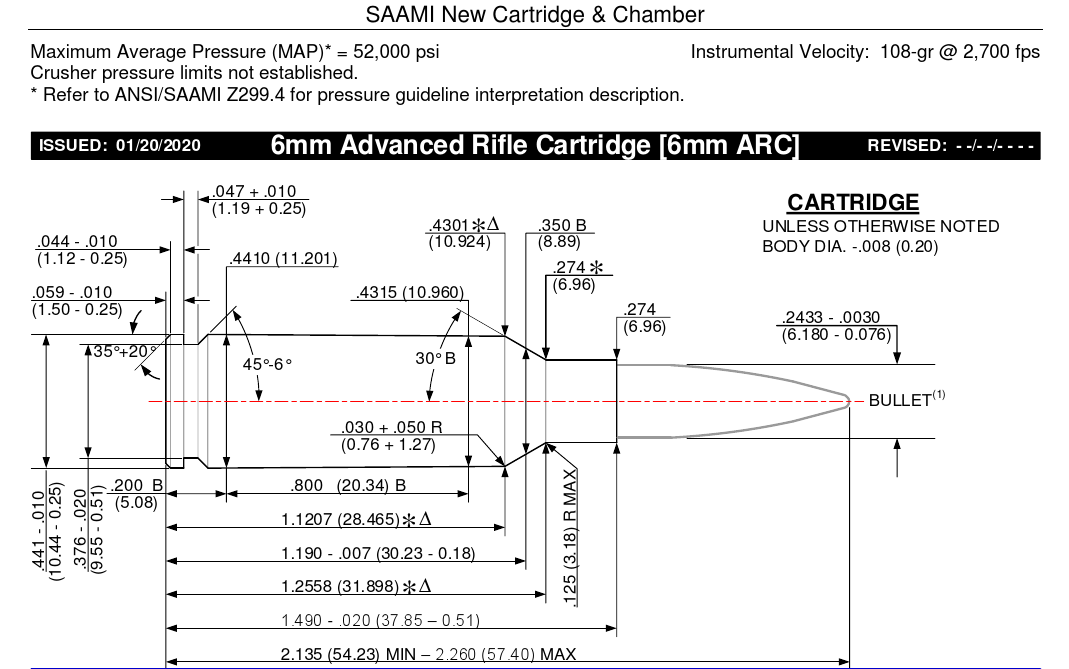 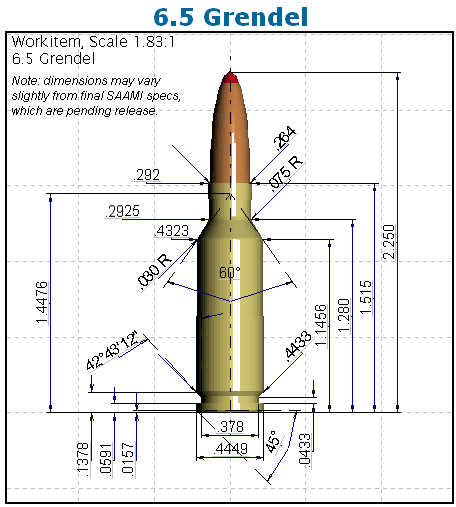 This cartridge looks mostly good to me, but the bullets they're putting in it are too heavy. It's not fast enough, with the given bullet compositions, to fragment well in tissue, even at short range. They are trading off terminal effect for long-range ballistics.

Perhaps something in 85gr or 90gr will become available someday (87gr was the optimum calculated weight for 6mm AR).