Water Dragons Of The Middle Kingdom 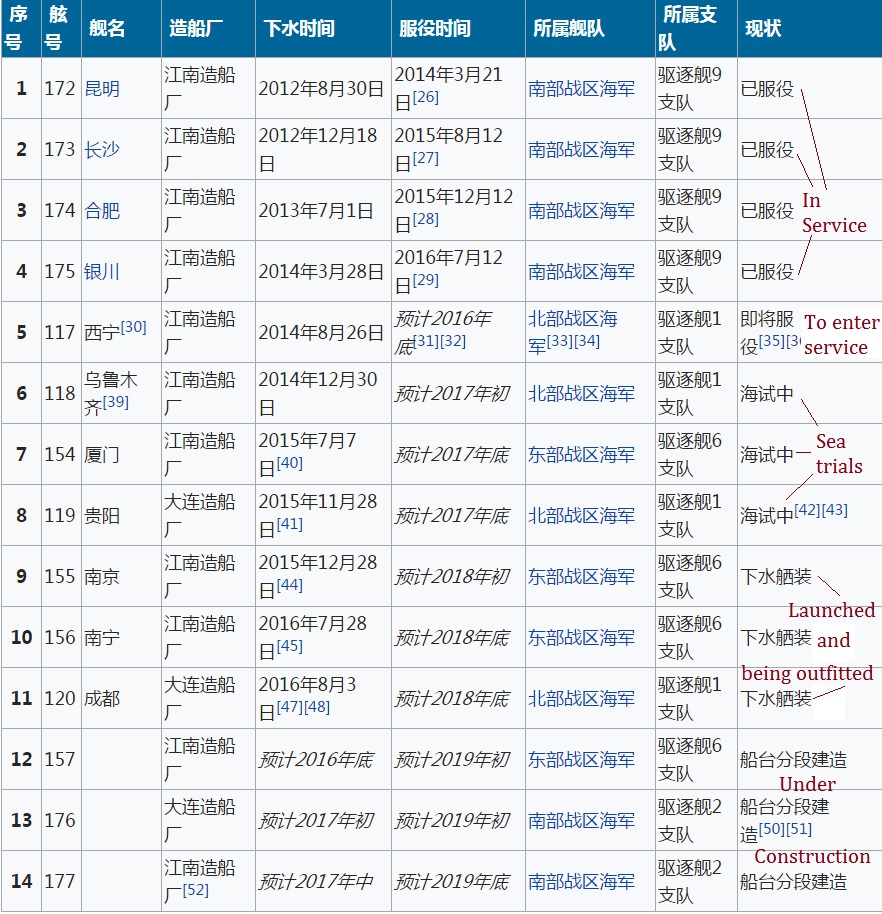 As of now, currently 17 are accounted for. Not only the wiki but other places on the web seem to think more or less 17 as of now as well, such as here. 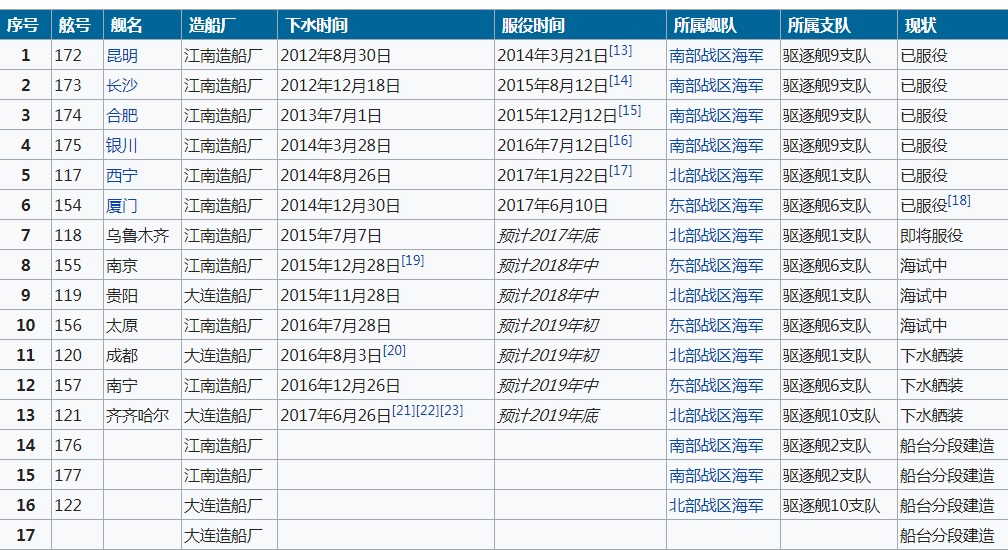 Two Type 055 destroyers are being built at the shipyard in Dalian, Liaoning. 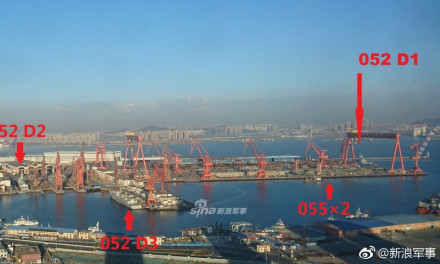 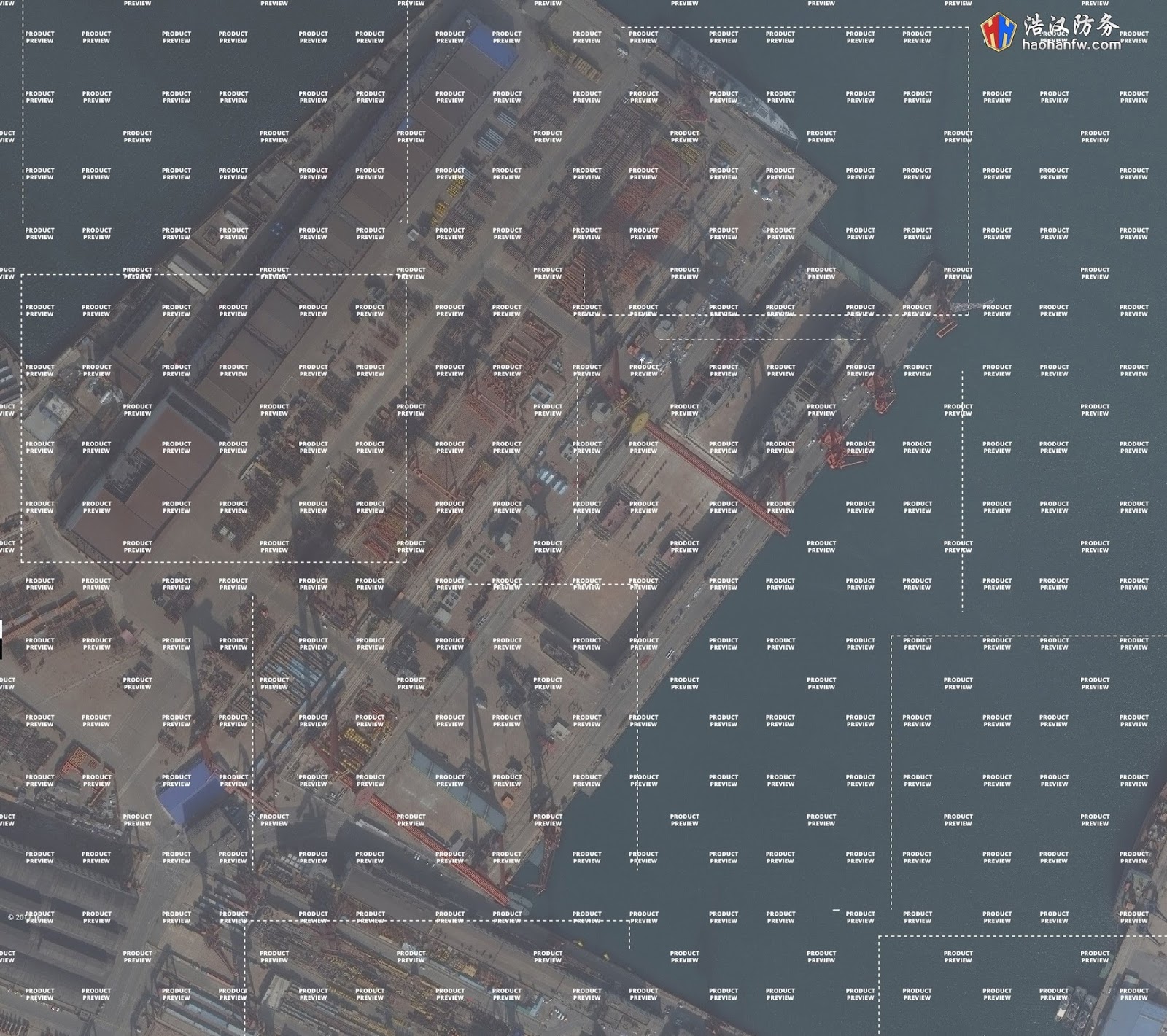 Can also be seen with just google map directly, although a bit of a time lag.

Two more Type 055s are being built in the Jiangnan Shipyard in Shanghai, one with its hull formed and the other with hull parts being laid out. 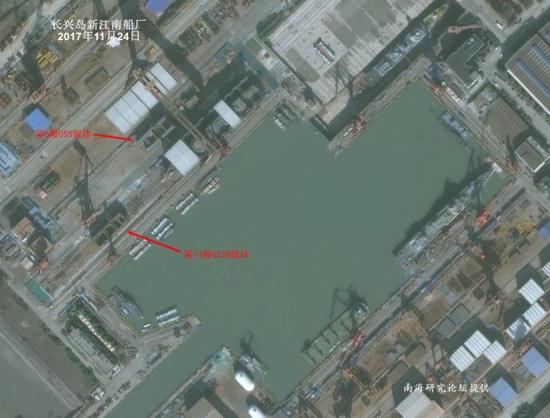 Chinese article about this image in the spoiler

A bigger image of it. Five LCACs also, article says they are Type 726As. 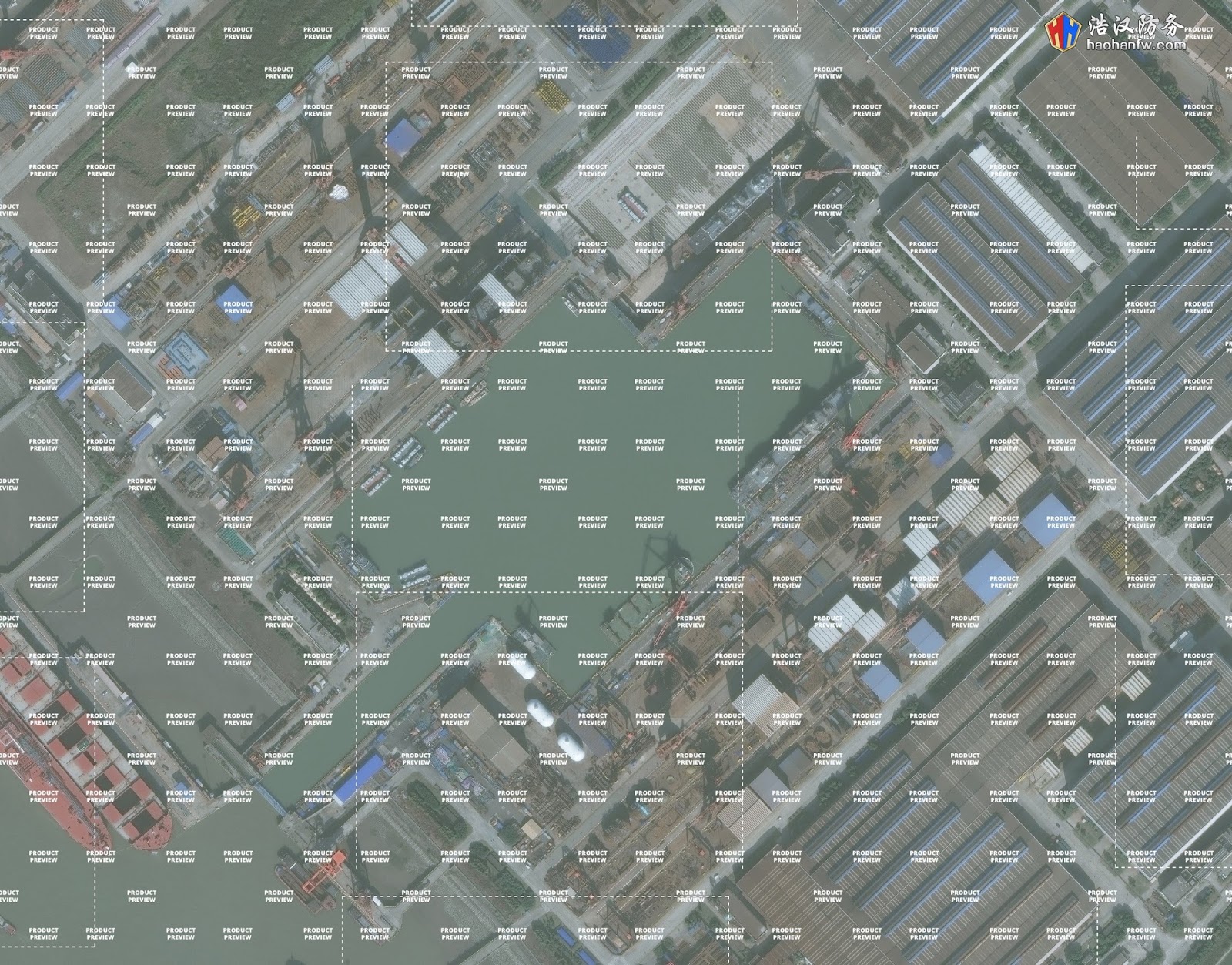 This shipyard can be viewed directly with google as well.

So those four plus the 1 already launched this year in late June makes five Type 055 Destroyers so far.

China started building its third aircraft carrier, with a hi-tech launch system, at a Shanghai shipyard last year, according to sources close to the People’s Liberation Army.

One of the sources said Shanghai Jiangnan Shipyard Group was given the go-ahead to begin work on the vessel after military leaders met in Beijing following the annual sessions of China’s legislature and top political advisory body in March.

“But the shipyard is still working on the carrier’s hull, which is expected to take about two years,” the source said. “Building the new carrier will be more complicated and challenging than the other two ships.”

China has been trying to build up a blue-water navy that can operate globally and support its maritime security, but it so far has only one aircraft carrier, the Liaoning – a repurposed Soviet ship it bought from Ukraine that went into service in 2012.

Its first Chinese designed and built aircraft carrier, the Type 001A, is expected to go into full service later this year.

The sources all said it was too early to say when the third vessel would be launched, but China plans to have four aircraft carrier battle groups in service by 2030, according to naval experts.

Shipbuilders and technicians from Shanghai and Dalian are working on the third vessel, which will have a displacement of about 80,000 tonnes – 10,000 tonnes more than the Liaoning, according to another source close to the PLA Navy.

“China has set up a strong and professional aircraft carrier team since early 2000, when it decided to retrofit the Varyag [the unfinished vessel China bought from Ukraine] to launch as the Liaoning, and it hired many Ukrainian experts ... as technical advisers,” the second source said.

The sources also confirmed that the new vessel, the CV-18, will use a launch system that is more advanced than the Soviet-designed ski-jump systems used in its other two aircraft carriers.

Its electromagnetic aircraft launch system will mean less wear and tear on the planes and it will allow more aircraft to be launched in a shorter time than other systems.

CSIC chairman Hu Wenming in November told state broadcaster CCTV that China now had the expertise to build any type of aircraft carrier. He said a unit of 5,000 people from across the country had been formed to work on developing the country’s aircraft carrier fleet.

The latest aircraft carrier project has been in the pipeline for some time. Satellite images taken back in 2009 showed a huge frame had been installed at the Shanghai shipyard to accommodate large-scale projects. That year, its general manager Nan Daqing told Shanghai Dragon TV the company was “fully prepared” to build the country’s first home-grown aircraft carrier.

The Jiangnan shipyard is China’s oldest – it was founded during the Qing dynasty in 1865 and became a state-owned enterprise in 1949.

Sources said the layout of the new aircraft carrier, including its flight deck and “island” command centre, would be different from the other two.

“The new vessel will have a smaller tower island than the Liaoning and its sister ship because it needs to accommodate China’s carrier-based J-15 fighter jets, which are quite large,” the first source said.

“It has been suggested that they look to Britain’s warship, the HMS Queen Elizabeth, which has two small tower islands on the deck. That would create more space for the runway and aircraft, but no final decision has been made yet.”

China’s navy has meanwhile begun training its own fighter pilots, rather than recruiting them from the air force, as it prepares to expand the fleet, the official PLA Daily reported.

What's the word on the PLAN's antisubmarine warfare capability? I don't see an awful lot there that could deal with a top of the line Western SSN at the moment and without that, all this flashy stuff is just so many targets.

That is the area they seem to be lagging, but they need to worry less about US SSNs (I doubt they will ever meet a French SSN

) than about the local SSKs as the Japanese are top of the line and the fleets of South Korea and Vietnam are also quite modern.

One factor to their ASW could be Chinese SOSUS that is probably being built, primarily between the various Chinese held features in the South China Sea. Probably harder for them to make SOSUS around Taiwan and towards Okinawa, which does highlight a strategic importance of keeping the Senkaku Islands out of their hands.
Some more here: http://gentleseas.bl...sea-on.html?m=1

SOSUS is only as effective as noisy are the opponent subs, so Vietnamese Kilos and Taiwanese subs can be detected but the new AIP Japanese subs are a completely different proposition, and US SSNs are going to be difficult to make out. Back in the 80s, the Victor III and the Akula nearly put SOSUS out of business and the PRC lacks the intelligence to identify the discrete frequencies that need to be monitored agains silent subs, so it's not going to be a ton of help.

Well, has the SOSUS network(s) had any sort of upgrade to the arrays in 40 years?

Signal processing, I'm sure, but the physical arrays?

I don't think so, but note the US was moving to Low Frequency Active by the end of the Cold War

Edited: but it's updating them now: https://thediplomat....sensor-network/

I keep hearing stuff from ex-RAF people about the "scare" when Victor 3 appeared, and subsequent types.

They were fairly dismissive.

Hear the same in Jive Turkey's youtube streams, guy was a sonar man so he knows his stuff. Soviet/Russian boats of the latest generation started out pretty quiet but as time wore on, lack of maintenance made them more noisy so they weren't much of a challenge.


The Chinese are starting to field VDS, MPAs, and their own seabed hydrophone system. This is a great leap forward for them ASW wise (hah!), but they are still working against the fact that while it is their own back yard, it's been the 7th Fleet's home field for a half century before that. Can you imagine how the USN would feel if every time it did a shake down cruise it was effectively in foreign navy's primary AO? Nothing they do can happen without the fear of being monitored. Where as USN ships can safely operate on sonar ranges off FLA and CA and know that no one is listening to their exercises or sound measurements. So the PLAN has a number of difficulties:

They have no experience operating these new systems. They are pretty much making up the doctrine and training from scratch, or from Russian material.

They have no previous data tracking US or other opponent boats, since as recently as 10 years ago they were effectively ASW blind. They probably literally don't even know what a USN boat sounds like, as compared to the likelihood that the USN has individually tracked and made a library recording of most of their boats.

The US likely has a much superior understanding of the hydrodynamics of the area, having operated there for many decades before the PLAN came out to play. USN SURTASS vessels for instance have patrolled that area for a couple decades now; those are the vessels the Chinese pick a fight with every once and a while and try to steal the towed arrays from.

It's extremely likely that the US operates its own post-SOSUS detection system around, if not inside, the first island chain. This likely includes nonacoustic as well as acoustic sensors, along with acoustic modems that also allow the system to directly talk to submerged SSNs.


All in all, I'd hate to be a high priority PLAN surface target in a Sino-American war. If D/Es are a threat to US CVs, for Lioaning USN nuke boats are practically a death sentence.

All true, but maybe the PRC is not looking to pick up a fight with the US.

I keep hearing stuff from ex-RAF people about the "scare" when Victor 3 appeared, and subsequent types.

They were fairly dismissive.

What wouldthe RAF know about a Victor III? I assume that was a typo for RN?

The RAF was the owner of the Nimrod maritime patrol planes, they better knew about the Victor III

Ah, didn't realize that they were organized that way. In the US MPAs come under the Navy not the airforce, but I totally forgot RAF generally controlled everything going back to coastal command.

there was a fight again most recently, with the RN making a play for the P-8. And failing. 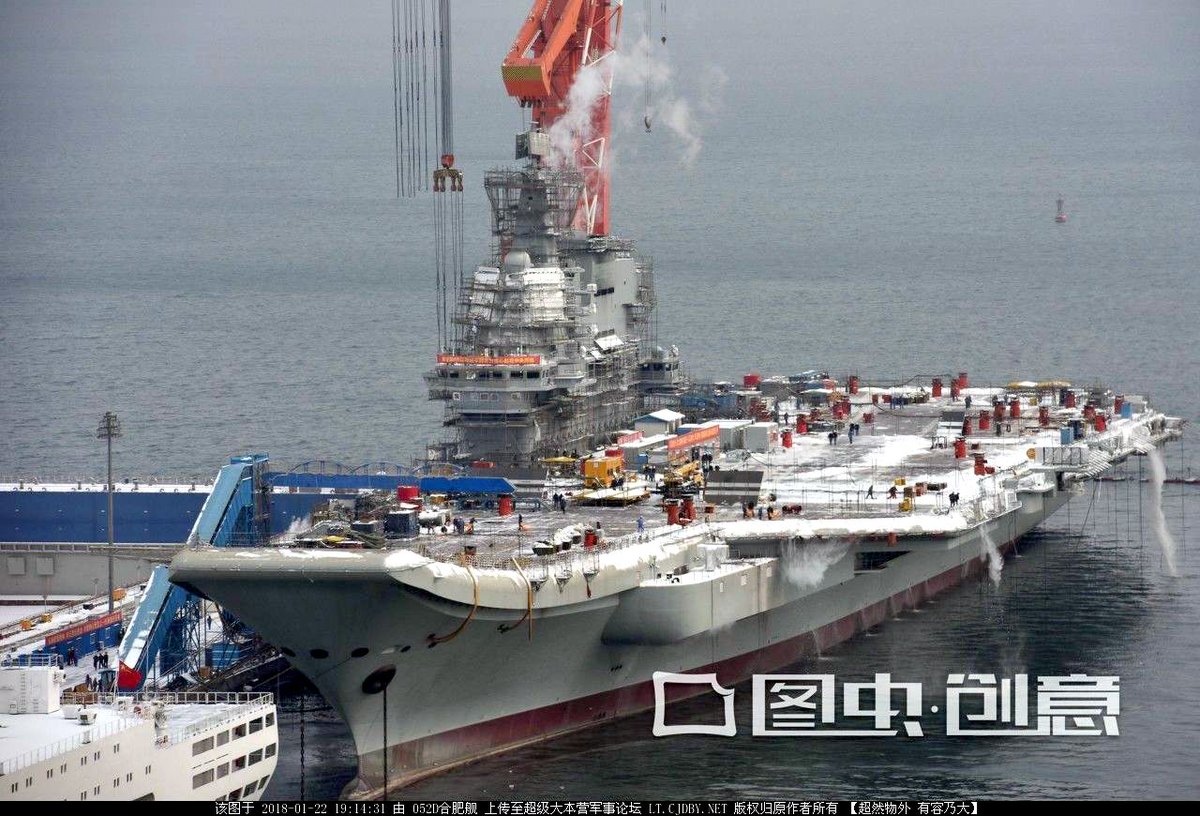 What platform is it sitting on?