$5 Million To Put A 30Mm Gun Turret On Stryker

416 replies to this topic

Tony has these numbers:

edit: I dont know why it jumbled the pasted table. in the preview it looked good.

No worries; thanks so much Panzermann.

another news on the Super40 shoot. With video!

In a BUSHMASTER User Conference at Big Sandy Range, AZ, Orbital ATK recently demonstrated the firepower and flexibility of its MK44 BUSHMASTER chain gun firing both 30 and 40mm ammunition. Marty Kauchak reported from the event here, here and here.
Attendees saw the weapon, mounted on a Kongsberg PROTECTOR turret on a General Dynamics Land Systems (GDLS) Light Armored Vehicle (LAV), engage a variety of targets in 30mm configuration using high-explosive incendiary ammunition. Additionally, the MK44 was set up with the company’s proprietary air-bursting munition fuze-setting equipment, to demonstrate the gun’s ability to precisely fire several rounds in rapid succession with point-bursting accuracy, both horizontally and vertically across the target. In addition to the air-bursting capability, Orbital ATK is developing other precision technologies for its medium-calibre ammunition, including proximity detonating and command guidance compatible with its medium-calibre cannons: capabilities that will be demonstrated in 2018 and 2019, respectively.
The MK44 BUSHMASTER is available new as a 30mm or 40mm weapon. At the completion of the 30mm demonstration, the system was easily “upgunned” in roughly one hour and readied to fire 40mm ammunition. The demonstration in 40mm configuration showed the resulting increased firepower and also fired the newly-developed 40mm Programmable Air Burst Munitions (PABM), with dramatic effects on a replicated target set in a combat-defilade position.
Industry partners GDLS, Kongsberg and Orbital ATK are upgrading the US Army’s Second Cavalry Regiment’s STRYKER fleet with a similar system integrating the PROTECTOR MCT-30 turret and a variant of the MK44 30mm BUSHMASTER, designated the XM813. Once fielded, the complete STRYKER system will offer combat crews greater protection as they will be able to fight under armour with a leap ahead in firepower, reliability and effectiveness through the addition of a vehicle main gun. Orbital ATK is developing and qualifying an entire Super 40mm family of ammunition to include Target Practice with Tracer, High Explosive (HE) Incendiary with Tracer and an Armor Penetrating Fin Stabilized Discarding Sabot with Tracer round, as well as the PABM showcased during the Bushmaster User Conference.
“The MK44 is quickly becoming the most sought-after medium-calibre cannon…. Today’s battlefield call for greater standoff and increased firepower is driving new combat vehicle platforms to include larger guns and advanced ammunition types. The same is true for upgrade programmes,” Dan Olson, Vice President and General Manager of the Armament Systems Division of Orbital ATK’s Defense Systems Group, commented. For an interview with Dan Olson, please go here.

Gunny is getting old

I think this is the msot recent Stryker topic. The Strykers in Germany are being fitted with new nav systems:

ROSE BARRACKS, VILSECK, Germany — Members of Project Manager Positioning Navigation and Timing (PM PNT) landed in Germany in early September with a mission: outfitting Soldiers’ Stryker vehicles with the latest in Positioning, Navigation and Timing (PNT) equipment. That equipment is the Mounted Assured PNT (Positioning, Navigation and Timing) System (MAPS) Generation 1, (MAPS GEN I), a powerful suite of new hardware and software that will ensure Soldiers have assured position and timing to navigate in a GPS degraded and denied environment. As adversaries across the spectrum field new capabilities to disrupt and degrade GPS, Soldiers will need more fortifications and assurances in those systems.

bonus points for an easily understandable title for the video. 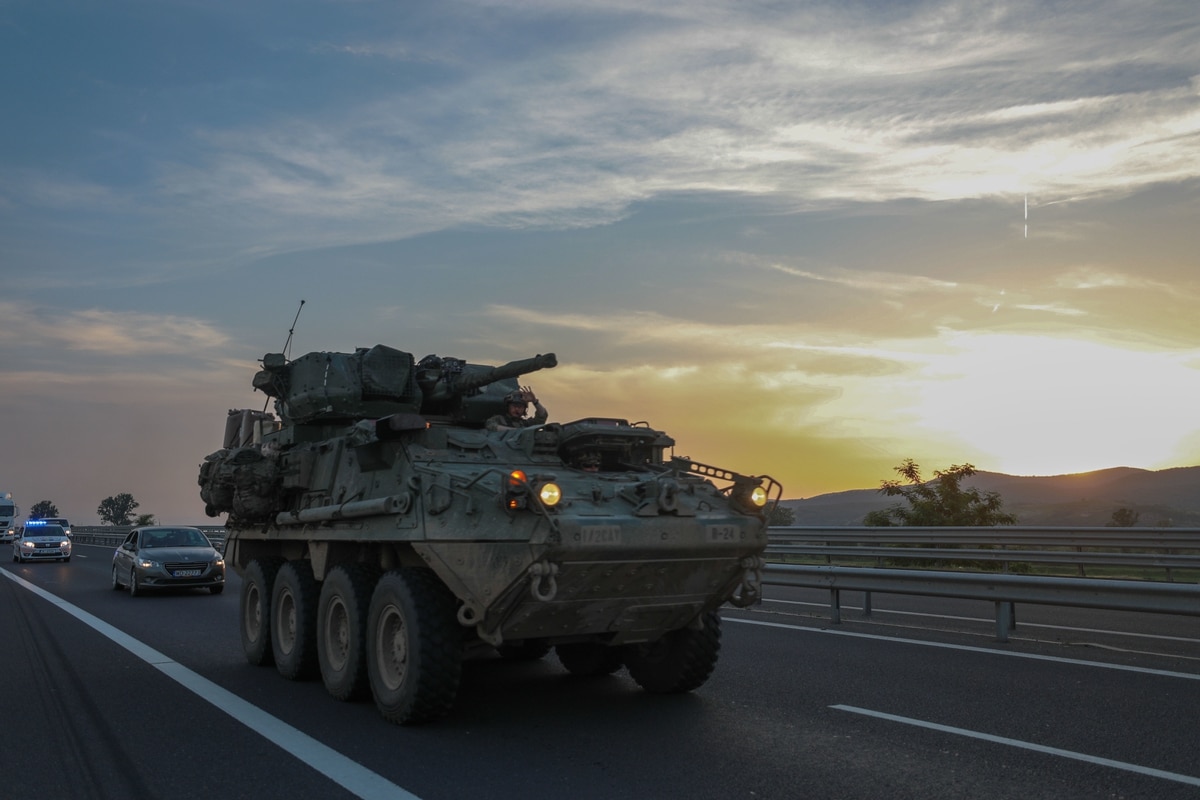 So basically they reinvented the BTR82A with refinements?

So basically they reinvented the BTR82A with refinements?

Ehrm, no. Yes it is an 8x8 armored box on wheels with a 30 mm cannon. A BTR has more dismounts and is a battle taxi. But I would rather comapre it to the old LAV-25 of the USMC. Or its role to the M3 Bradley Cavalry Fighitng Vehicle, because it is intended as a recce vehicle that can also carry a few dismounts for scouting on foot.

Oh im sorry, I thought they intended this as a replacement for all the section vehicles. OK, as a recce vehicle its got a lot going for it.

Other than being huge and with questionable mobility on the poor ground.

Other than being huge and with questionable mobility on the poor ground.

Well, the basic Stryker APC is already not so great on soft ground.

Even a Saracen is probably better on Soft ground. But you just have to use what you have, the days of throwing away good (or at least, potentially useable) kit, as was done in the war on terror, are now over.

Wait, wasn't reconnaissance component of the FRES programme won by Ajax? Hence Boxer should only replace troop transports like Saxon and FV432.

EDIT: nevermind, I just realised you were talking about Stryker. I should fully wake up before posting anything.

Dont feel bad, everyone is confused about what im trying to say.

My understanding is the turret is unmanned and barely penetrates the hull, so there should be no reduction in troop capacity over a normal infantry RWS equipped Stryker.

My understanding is the turret is unmanned and barely penetrates the hull, so there should be no reduction in troop capacity over a normal infantry RWS equipped Stryker.