266k jobs created in a month - that's what right wingers tout as success in a country of about 330M?
Oh, the gullibles.

266k is well within the noise band, and there's no break with normalcy since 2011. No policy change shows up in there. If anything, 2019 looks weak.

Moreover, 266k is a preliminary data point, just as the month before. The last reliably data point is Sep 2019: 193k.

And then there's the fact that the lying moron's stupid and crony trade wars have hurt agriculture much, and that statistic with 266k jobs created is NONFARM only.

It's normal to exclude farm jobs because of their seasonality, but in this case it also happens to exclude an area where the lying moron's policies have had one of the worst effects.

Jobs created is a misnomer.  It is jobs filled. Jobs that pay enough to pull people off the coach getting free stuff from the government.   There are millions of jobs going begging probably because they don't pay enough, or require qualifications applicants don't have.  If they would pay something like a board member of Burisma as they did for that old lying fool's son, Hunter they all would be filled.

With a low 3.5% unemployment rate even people with criminal records can get good jobs.

plus that's 266K on top of the best unemployment rate in 50 years.

More proof, if needed, that the failed algorithm is still failing.  It generates a signal to noise ratio that breaks the meter...

Finally, the Republicans are engaging in extreme fiscal stimulus with their extreme deficit spending, so a much better economy would be within the realm of the ordinary.

The German employment rate is 3 per cent points better, by the way. There's still plenty slack in the American economy, which makes ongoing improvement rather easy.

except that I was here for both administrations and 5 years ago you couldn't beg, borrow, or steal a job.  Now there is a help wanted sign in every business window. 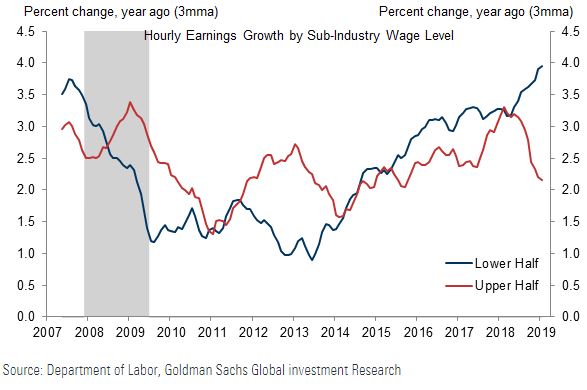 my company has been able to do decent raises every year since Trump was elected.  In eight years prior we were  only able to offer raises in two years and the amounts were tiny.  This year each employee with be getting a bonus of two weeks salary for Christmas from Santa Trump.

You're deluding yourself with correlations.

There's a vast array of economic indicators, and there are no breaks in the trend for the better since early 2017 (there are breaks for the worse, though).

As mentioned before, that's actually a hint at poor policies given the enormous fiscal stimulus from increased deficit spending.

For whatever reason, the site's situation is not being discussed, and I think this really needs to be resolved. Maybe we should create a separate thread for it?

There are some large changes in site ownership possible in the near future but staff are presently in the dark as to progress as well. Very frustrating.

Why Wages Are Finally Rising, 10 Years After the Recession

The recent gains are going to those who need it most. Over the past year, low-wage workers have experienced the fastest pay increases, a shift from earlier in the recovery, when wage growth was concentrated at the top.  The faster growth at the bottom is probably being fueled in part by recent minimum-wage increases in cities and states across the country. Research from the Economic Policy Institute, a liberal-leaning think tank, found that over the past five years, wages for low-wage workers rose 13 percent in states that raised their minimum wages, compared with 8.4 percent in states that did not.  But minimum wages are only part of the story. Ernie Tedeschi, an economist at Evercore ISI, estimates that the minimum-wage increases account for a quarter to a third of low-wage workers’ gains over the past three years. The rest is most likely a result of a tightening labor market that is forcing employers to raise pay even for workers at the bottom of the earnings ladder.

except that I was here for both administrations and 5 years ago you couldn't beg, borrow, or steal a job.  Now there is a help wanted sign in every business window.

Something that's been bothering me, is that when the House Intelligence Committee denied the administration legal presence during their hearings, they denied the presidency its constitutional right to invoke Executive Privilege. One can debate whether any particular invocation of EP would be proper but that's for the Judiciary to decide, not the Legislative branch. That's a HUGE blow to separation of powers. The Legislative branch denied the Executive its right to invoke its rights and the right of the Judiciary to decide if it's correct.

For whatever reason, the site's situation is not being discussed, and I think this really needs to be resolved. Maybe we should create a separate thread for it?

There are some large changes in site ownership possible in the near future but staff are presently in the dark as to progress as well. Very frustrating.

Thanks for that Jeff.

I don't see a foundation for your statement.

The author there points out that political bias appears to influence responses to questions about business confidence. His conclusion is that one should better look at other indicators, particularly money flows (payrollc hanges, but I suppose it also works on investment stats).

I suppose a viable criticism would be that confidence is about the future, while spending is about (decitions made in) the past. He's comparing apples with oranges.

Great economic numbers came out last week, so what does a business site like Business Insider cover for news on the president?

Trump's salt and pepper shakers tower over everyone else's. Obama, Bush, and Clinton used the same size shakers as their guests.

The article includes dozens of photos of Trump's larger S&P shakers and comparisons to the other shakers nearby, other presidents and their S&P shakers relative sizes but then showing near the end that there were plenty of times when Trump's shakers were the same size as the others.

Now that is some hard hitting journalisming you got there guys. How long did staff work finding and adding graphics to all of those pictures?

We must be approaching the peak stupid singularity soon.

Those various shakers could be used as pieces in a game of chess. Just need a checker board of sorts. Surely a table cloth somewhere in the WH has a suitable pattern.

Make no mistake: The report chronicles serious wrongdoing with respect to the FBI's surveillance of Trump campaign advisor Carter Page, and is ultimately a damning indictment of the the nation's top law enforcement agency. All Americans should have serious concerns about the FBI's respect for constitutional principles, ability to carefully evaluate conflicting information, and its competency in general.

Many in the media have focused on the fact that the IG report failed to turn up any evidence that the FBI's investigation of the Trump campaign's possible connections to Russia was politically motivated. The Washington Post's key takeaway was that the report amounted to a "triple rebuke" of the president and his allies. CNN's article led with "conspiracy theories debunked" and called the Russia probe "legal and unbiased," before conceding "serious mistakes" that the network predominantly attributed to a "low level FBI lawyer." In general, the Trump-critical mainstream media has treated the faltering of the most fervent pro-Trump partisans' conspiracy theory about a deep state coup as some kind of full acquittal of the FBI. It's not. The IG report is a chronicle of massive government wrongdoing.

The IG office found seven problems with the very first FISA warrant application. These included: leaving out the fact that Page in the past had provided the FBI with information about his contacts with Russian intelligence officers; overstating the degree that Steele's prior reporting had been used in criminal proceedings; omitting information from Steele himself that one of his sources was prone to boasting and may have some credibility issues; incorrectly claiming that Steele wasn't the source of a leak of his information to Yahoo News; and even omitting some comments from consensual interviews with Page where he denied having met certain Russian officials. These errors were not corrected in the renewal applications.

The IG report notes that the FBI was unable to corroborate any of the information about Page that was in the Steele report, even as they kept seeking renewal of the wiretapping. Page has not been charged with any crimes.

But Michael Horowitz’s IG report lays out a whopping 17 “inaccuracies and omissions” that were not brought to the attention of the Office of Intelligence prior to the fourth and last FISA application being filed in June 2017. Further, National Security Division (NSD) officials were not even aware of the issues when they prepared and reviewed the first FISA application, meaning at the very least, due diligence was not performed. Seven of the inaccuracies and omissions related to the first FISA application, and these errors were carried on the three subsequent applications, along with additional errors.

Its not perjury, its inaccuracy.

Those various shakers could be used as pieces in a game of chess. Just need a checker board of sorts. Surely a table cloth somewhere in the WH has a suitable pattern.