77 replies to this topic

A thread to discuss the Cold war at sea.

To start off, just discovered that the IUSSCAA has a message board that is highly interesting:

"Blind Man's Bluff" is a good read of submarine espionage in the Cold War.

Playing the game 'Phantom Doctrine' the other day, I was made aware of this disaster I was previously unaware of. Its instructive of some of the problems the Russian Fleet has that were laid down in Soviet times.

How were those Backfires to be used answered. Interesting that Soviet Naval aviators were more VVS than Navy.

Ah yeah, I read this some months ago, stupidly I didnt link it up. Its very interesting isnt it?

I posted this once before, but its a very interesting coverage of the 1973 naval standoff in the Mediterranean during the Yom Kippur War. There are also some interesting details about previous standoff's between the 6th Fleet, the Royal Navy and the 5th Eskadra.

The Walker spy ring is deemed to be the most damaging in USN history. Why? because the man was a radioman!

"Soviet spy chief Boris Solomatin offered a more nuanced perspective when author Pete Earley interviewed him in Moscow nearly ten years after Walker’s arrest. Refusing to compare the Walker case with that of former CIA counterintelligence officer Aldrich Ames, another high-profile spy for the Soviet Union, he observed that agents must be judged on the content of the information they deliver. Ames provided the names of Russians spying for the United States and thus affected the KGB-CIA espionage war. Ames’ information “would have been used to identify traitors,” he said. “That is a one-time event. But Walker’s information not only provided us with ongoing intelligence, but helped us over time to understand and study how your military actually thinks.” John Walker had been the Soviets’ key source on Navy submarine missile forces, which Solomatin viewed as the main component of the American nuclear triad. "

US Navy procedures "helped":  "This research focuses on just one of the systems compromised by John Walker himself: the Fleet Broadcasting System (FBS) during the period 1967-1975, which was used to transmit all US Navy operational orders to ships at sea. Why was the communications security (COMSEC) system so completely defenseless against one rogue sailor, acting alone? The evidence shows that FBS was designed in such a way that it was effectively impossible to detect or prevent rogue insiders from compromising the system. Personnel investigations were cursory, frequently delayed, and based more on hunches than hard scientific criteria. "

Even the North Koreans joined the party when they captured the Pueblo: https://www.cryptomuseum.com/crypto/usa/kw7/index.htm

All of which enabled the Soviets to read USN traffic and discover a horrible secret, their shiny new SSBNs of the Yankee class were being trailed regularly!

A tragic story, the loss of USS Thresher:

I might have posted this before, all on the development and evolution of the Grumman F14 Tomcat.

Another fascinating tale of the Cold war: project Azorian, the CIA's quest to recover a lost Soviet submarine from the bottom of the Pacific:

For years questions went back and forth on whether anything worthwile was recovered. I wanted to Believe. But then I ran across this at the IUSSCAA board that makes more sense than anything I have read:

"Based on the extreme damage within the recovered first compartment of the K-129, it appears the 5000 degree (F) missile exhaust plume expanded almost instantly throughout the K-129 after the launch tube was breached. This conclusion is consistent with the destruction of documents and equipment Project AZORIAN was intended to recover from the 100 foot mid-ships section of the K-129 had that section not been lost as it was being raised by the HGE, i.e., such material and equipment were exposed to the 5000 degree missile exhaust plumes for a total (both missiles) of 190 seconds."

But then the other shoe drops:

"This assessment of the K-129 missile launch support system suggests that if current Russian SSBNs have a similarly robust launch system survival capability, they may, as discussed above in BACKGROUND, be capable of ripple-firing all missiles even if the crew has been killed or incapacitated and the platform has sustained significant battle damage. Further, the stand-off distance provided by Russian double-hull construction, adds significantly to the problem of making a successful mission-ending attack on currently operational Russian SSBNs with conventional weapons."

A chilling paragraph when one remember this: https://www.numbers-...-the-dead-hand/

There was a documentary on azorian that claims that in the wreckage they found the warhead of a Soviet nuclear tipped torpedo. Which surely was worthwhile even if they didnt recover anything else.

Its worth searching the CIA FOIA website, I found an absolute ton on there on the performance and capability of Soviet Submarine. There was an even a study there on acoustic conditions in the Norwegian sea.

Blind Mans Bluff seem to indicate that a lot of people thought raising the boat was ineffective and that getting machines and code books from the control room was a better avenue. Not remotely enough of an engineer to to have an opinion.

There was a suggestion made at the time a better option would be to build an ROV, a bit like that used by Dr Ballard a decade and a half later, and use that to cut into the control room and retrieve any useful material. They might have been right. It would certainly have been a lot cheaper and less obvious.

After some fun down in the FFZ, this week I bring the strange story of the Soviet sub that rammed a frigate:

"The ultimate success story of the ASW squadron was when a Soviet Echo II-class nuclear submarine was picked up by an Atlantic Command submarine outside the Med, trailed through the Strait of Gibraltar without losing contact, and passed to the ASW squadron. Once in the Med, contact was alternately maintained by submarines, P-3s, and the ASW squadron. Contact was passed from the submarine to the P-3s to the ASW squadron and back to the P-3s. If the ASW squadron lost it, they would tell the P-3s and the submarines, and the submarine that was in trail would get the ASW squadron back on contact. They tracked them for ten days. The ultimate act was on 28 August 1976, when the skipper of the Echo II got mad and ran into the side of the USS Voge.
The Voge, the Koelsch, the McCloy, and P-3 aircraft were out there and had been tracking the submarine all the way from Gibraltar to the vicinity of Crete. Every time this Echo came up to periscope depth, he saw one of these ships around. For some reason, he thought that the ship that was tracking him was the Voge. The Voge was just a communication link. It wasn't a towed-array ship, but they all looked alike. So he decided the Voge was the ship that was causing him all this grief, and he came up to periscope depth and saw the Voge way off on the horizon. The Moinester, which was closer really had the array. But he didn't think the Moinester was his problem, because he hadn't seen it before.
When the Voge started to run, the Echo II came up alongside, about 600 yards out, ran with the Voge for several miles, and then just turned right towards the Voge and ran into it. Tore part of the propeller off the Voge and punctured the hull back there in one of the after compartments, after steering." 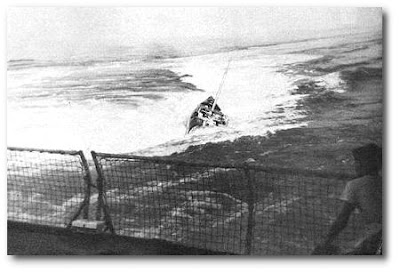 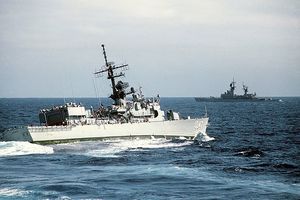 The other side of the hill tells a different story:

The Soviet Echo II class SSGN K-22 was finishing up operations in the Mediterranean Sea near Crete. On 28 August, 1976 the boat was 150 miles to the south-west of the island when it came to PD at 1628. The commander spotted the Knox-class frigate Moinester (FF 1097) in the periscope. The captain immediately estimated bearing and range by eye, bearing 183 relative, range 40-50 cables (in reality, B192 R20 cables). Instead of breaking off, the captain decided to maintain contact for training.
At 1636 the boat dove to 140 meters, turning on C110 10kts and began to close the American frigate. The water depth was 2900 meters, SS 1-2, wind 280 3m/sec, visibility daytime unlimited. The captain of the submarine considered himself as detected by the frigate and maneuvered and varied his speed in order to carry out a break away maneuver. Thanks to his incompetent actions he created a poor sonar environment for his sonar and received spotty data from the targets, and didn’t have a clear view of the surface situation. Maneuvering on a parallel course with the Moinester, distance became 17.5 cables, unacceptably close (course 050).
In these conditions, he came to PD three times – 1650, 1738 and 1753 – and never saw the second frigate. The submarine captain gave the verbal order to quit updating the log, did not sound a general alarm, did not share the data on target movement with the XO, the Nav or the tracking party. He constantly made mistakes in estimating distance and more than once approached at high speed into the skip zone (3-5 cables) from the frigate Moinester. At 1753, the captain detected the frigate bearing 062 relative, 7 cables and turned sharply left, beginning a zig-zag maneuver. The SSGN continued on a general heading of 320 at a depth of 4-5 meters, exposing the sail above the surface of the water. Because of the zig-zagging and the vibration produced by the violent maneuvers, observation through the periscope was difficult and the captain lost sight of the frigate several times, finally losing contact at 1815.
Ten minutes later, unexpectedly for him he saw a second American frigate at very close range. At 1825 the commander of K-22 gave the command “Emergency deep” and “Down periscope”. These measures were too late and the SSGN plowed into the port side of the frigate Voge a minute later at 17 knots under the helo hanger. The blow was struck by the bow of the boat and followed up with the forward part of the sail. The boat received huge dents in the hull, cracks in the bulkheads and a damaged screw. The Voge lost way and was towed at first to the base in Crete and to Toulon, France for repairs in September. The Soviet boat suffered damage to the bow on the outer hull and the sonar dome for the “Kerch’” system was damaged as was the “Argument” missile guidance antenna. The boat had to surface and departed the area of the accident under its own power while being escorted by Soviet ships. Emergency repairs were conducted at Kithera anchorage and after than the boat returned to Severodvinsk for major repairs.

I wonder if the subtext there is decision making after 10 days of high stresss and no sleep.

This is good, audio is not fantastic but worth persevering.

If he fires one, I'll fire one.

I can remember watching that scene on TV from a re-run of The Bedford Incident many years ago and have never forgotten it.