Large numbers of APCs have been given to HTS and friends.

And there is visual evidence at least 3 were destroyed in that attack (including one running into minefield), together with several technicals and DIY personnel carriers. Rebels took heavy losses.

If they keep pushing north as I suggested there are only two major roads they need to cut in order to isolate the rebel positions west of Idlib.

This would do it: 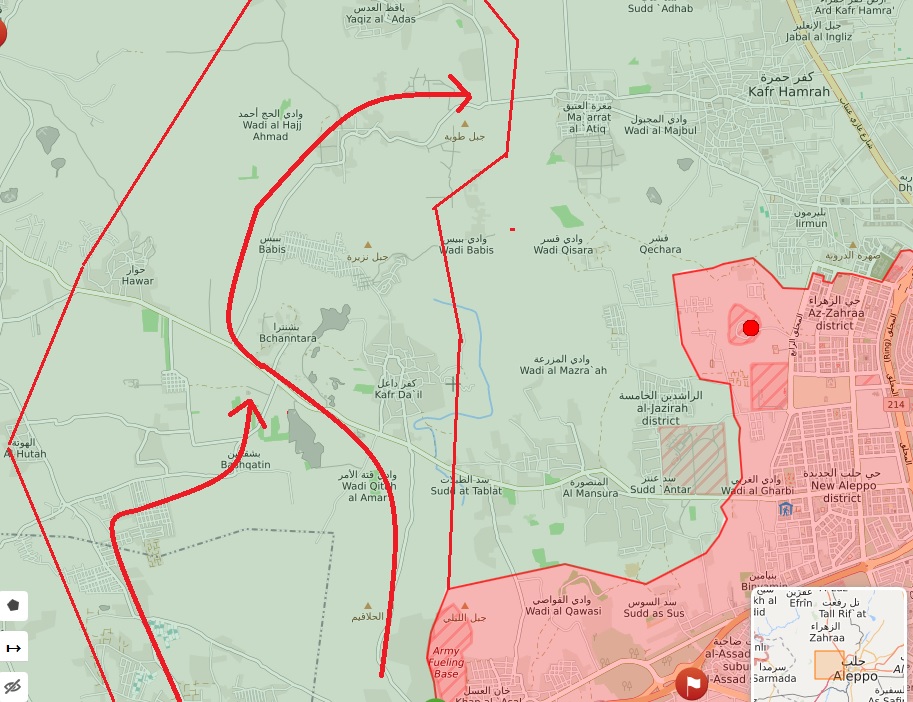 Looks like they are pushing along the M45 for now.

I am seriously impressed, the SAA has advanced some 10km, taking the M60 near Aleppo and securing the M5 completely.

https://bdnews24.com...-idlib-province Turkey dismissed on Saturday Russian accusations that it has flouted de-escalation agreements with Russia and Iran in Syria's Idlib province, and threatened to take military action in the area if diplomatic efforts with Moscow fail.

Turkey and Russia, which back opposing sides in Syria's war, agreed in 2018 to set up a de-escalation zone in the northwestern province. But their fragile cooperation has been disrupted by a Syrian government offensive in Idlib, in which 13 Turkish soldiers have been killed in the past two weeks.

Ankara has said it will use military power to drive back the Syrian forces unless they withdraw by the end of February, and President Tayyip Erdogan has said Turkey will strike government forces anywhere in Syria if another Turkish soldier was hurt.

Erdogan discussed the situation in separate phone calls with Russian President Vladimir Putin on Wednesday and US President Donald Trump on Saturday, but there was no immediate word of a diplomatic breakthrough.

Russia, which backs Syrian President Bashar al-Assad, says Turkey, which has poured military forces into Idlib, has aggravated the situation and failed to neutralise militants there.

But Turkey blames the situation on the advances by Syrian government forces in Idlib.

Foreign Minister Mevlut Cavusoglu said Turkey wanted to resolve matters with Russia over Idlib through diplomacy. But, speaking during an international security conference in Munich, he added: "If it won't work through diplomatic channels, we will take the necessary steps."

Ankara has been angered by the seizure by Syrian government forces of Turkish military observation posts established in Idlib under the 2018 deal.

"It is impossible for us to remain silent against their siege. We are doing what is necessary against them," NTV quoted Erdogan as saying on a flight back from Pakistan.

Erdogan also chided the United States, a NATO ally, saying US statements of support did not instil trust.

Speaking in Istanbul later on Saturday, Erdogan again said Turkey would drive back Syrian forces unless they withdrew to the borders outlined by Ankara and Moscow in 2018. But he also appeared to bring forward his end-of-February deadline.

"The solution in Idlib is the (Syrian) regime stopping its hostility and withdrawing to the borders in the agreements. Otherwise, we will handle this before the end of February," Erdogan said.

"We would like to do this with the support of our friends. If we have to do it the hard way, we are also up for that," he said, apparently referring to Ankara's Western allies.

"Until we clear Syria of terrorist organisations and the cruelty of the (Syrian) regime, we will not rest easy."

Despite the tough rhetoric, Russian and Turkish officials are talking behind the scenes. Turkish and Russian officials held talks in Ankara on Saturday and Cavusoglu said a Turkish delegation would go to Moscow on Monday for talks.

Cavusoglu also had talks with Russian Foreign Minister Sergei Lavrov in Munich on Saturday - the first ministerial level meeting between Ankara and Moscow since the situation deteriorated in Idlib.

Cavusoglu tweeted that he had a "positive meeting" with Lavrov but that Turkey would not be "making an evaluation" until after Monday's talks in Moscow. Lavrov said Russia had very good ties with Turkey, but the sides did not always agree on issues.

Little late for that I would have thought...

Looks like a new pocket is about to be cut off in the west of Aleppo.

Poor Turks, they just build a new festung and the Syrians cut it off and move on, it’s so 1945.

Reportedly from the local area, a US convoy of military vehicles crossed over the Iraq border and into northeastern Syria.

A convoy of US military vehicles has arrived from Iraq to Al-Hasakah province in northeastern Syria, Sham FM broadcaster reported.

According to its post on Facebook, at least 55 vehicles, including tanks and engineer equipment, entered the province from Iraq.

It's done. There was a total rout west of Aleppo and the front line now looks identical to that in the map I drew a few posts above (edit - one giving the most ambitions short term goals I thought feasible)

The general story seems to be that the rebels have hardly any troops willing to fight.

It's done. There was a total rout west of Aleppo and the front line now looks identical to that in the map I drew a few posts above.

The general story seems to be that the rebels have hardly any troops willing to fight.

Meanwhile, the Turkish army and proxies seems to be more active in shelling Kurd areas than in shelling SAA and allied militias. Their supposed intervention in Idlib looks to be totally ineffective for now, no matter how much armoured vehicles they bring in.

No surprises there. No. 1 priority for the Turks all along has been, is, and remains the destruction of the Kurds.

Turkey says that Syria will not effect S-400 deal with Russia,

What seems to be emerging is a pattern of jostling on the ground for advantage in places like Syria and Libya, but a wilful decision in both Ankara and Moscow that such competition will not rise to the strategic level.  Curious.

Reportedly from the local area, a US convoy of military vehicles crossed over the Iraq border and into northeastern Syria.

A convoy of US military vehicles has arrived from Iraq to Al-Hasakah province in northeastern Syria, Sham FM broadcaster reported.

According to its post on Facebook, at least 55 vehicles, including tanks and engineer equipment, entered the province from Iraq.

https://www.alaraby....posals-on-idlib
Turkey said on Tuesday that Russia had yet to offer an acceptable solution to the worsening violence in northwestern Syria, but added that talks were ongoing.

Syrian forces, backed by Russian air power, have pressed a brutal offensive in Idlib, the last rebel stronghold in the northwest of the country, displacing some 900,000 people in less than three months.

Turkey and Russia, who back opposing sides, were again locked in talks in Moscow on Tuesday after an earlier round of discussions in Ankara last week failed to produce an agreement.

"For the moment, no satisfying result has obtained from the negotiations," Ibrahim Kalin, spokesman for President Recep Tayyip Erdogan, told reporters in Ankara.

Kalin rejected claims by Moscow that the offensive was necessary to prevent attacks against a Russian military base in the area.

"These statements do not correspond with the reality on the ground," he said.

Syria has become a prison for the Sultan. He can neither win nor can he exit.

He is not the first or last dictator to be caged by his own hubris. How ironic he now needs to depend on his own military that wanted to depose him.

Kalin rejected claims by Moscow that the offensive was necessary to prevent attacks against a Russian military base in the area. "These statements do not correspond with the reality on the ground,"

Further confirmation of Syrian gains there, and of the Soviet proverb that he who has the backing of the Russian Air Force wins.