This Norwegian warship has collided with a tanker and is lisitng - badly.

Judging by the photos, it's got no freeboard left on starboard, but is in probably shallow waters (though that's hard to tell at Norwegian coast where the seabed is often very much sloped near the coastline). 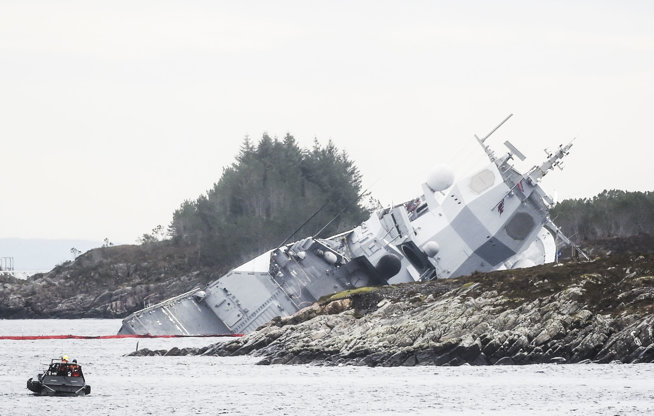 Hmm, maybe they keep at least the superstructure above water, for cannibalizing.

I wonder why the situation worsened. The watertight compartments are supposed to avoid that.

Hmm, maybe they keep at least the superstructure above water, for cannibalizing.

I wonder why the situation worsened. The watertight compartments are supposed to avoid that.

Compartmentalisation does not help much, if rocks tear open the side of the hull. Though whta exactly happened remains to be seen.

from you link to maritime bulletin:

Comment: Again, laden massive cargo ship collided with Navy frigate, similar to accidents which occurred with USA Nay frigates in Japan and off Singapore, recently. Understood frigate was hit by tanker, it’s like feather-weight boxer being hit by super weight clumsy, slow moving giant boxer. Whatever the situation and ships positions were according to COLREG, Navy is the main culprit. Aframax tanker in full load is restricted in maneuverability by definition, while frigate, by definition, is speedy maneuverable vehicle, supposedly always ready for dangerous situation, manned by a numerous crew.

comment says that the firgate FUBARed navigation, the AFRAMAX is several magnitudes heavier and bigger in size. Hoe do you miss that one and get hit by it?

At least its some consolation all crewmen survived. You only have to look at what happened with similar incidents with US Warships to see the deck was stacked against them.

Disturbing amount of collisions with warships these days. You have to wonder if its a common problem.

German light cruisers of the 1920's were designed with little robustness, too little reserve displacement (most Japanese inter-war destroyers were even worse) contrary to the sturdiness reputation earned by German capital ships in 1916.

It's enticing to design ships with little reserves, little sturdiness in peacetime. This may be a widespread problem below the surface.

Regarding this specific collision:

Keep in mind it happened at 0300 in November - low visibility. It may have happened in a Fjord.

That's no real excuse, but the conditions were almost certainly unsafer than with the collision off Japan a few months ago.

It's a global problem that naval bridge crews are in bureaucracies that treat bridge crew jobs as something that people go through during their career, not as a career in themselves.

Even civilian shipping captains with many more years average experience on the bridge often collide - it's to be expected that the naval bridge crews have collisions as well.

Moreover, navies often do a lot more division of labour on the bridge, while civilian ship captains are expected to have a more complete understanding of their surroundings, not delegating much of the responsibility to others. Both approaches have their issues. What actually ripped the frigate open?

It collided with a tanker that was just leaving a nearby oil refinery, it received a huge gash along the hull on starboard side and it was then grounded on purpose to avoid sinking and becoming a total loss. We lost one frigate to grounding back in 1994 (KNM Oslo, one of five ships of her class), so it seems that our frigates are getting unlucky. That's a big gash. Lucky no lives lost with that.

It collided with a tanker that was just leaving a nearby oil refinery, it received a huge gash along the hull on starboard side and it was then grounded on purpose to avoid sinking and becoming a total loss.

I should have been more specific with my question.

What part of the tanker made that huge rip? I take it the collision actually occurred on the tanker's southbound leg, consistent with the damage on the frigate's starboard side. In which case you gotta wonder why the fuck they just ran across the former's bow at right angles, darkness or not? At least in the case of USS Fitzgerald the courses were converging over a period of time.

Tanker was under tow as well at the time, but I also heard that the warship was stationery, so mistake by the tug?

Tanker was under tow as well at the time, but I also heard that the warship was stationery, so mistake by the tug?

Reportedly frigate was 'uncontrollable' at the time of incident. Sounds weird if true, some sort of major hardware breakdown?

Damage seems pretty bad, repair bill is going to have many numbers. Maybe donate the ship to Finland for Laivue2020 program?

We are back into the realms of wondering if this is a cyberattack. Its bound to happen sooner or later.