92 replies to this topic 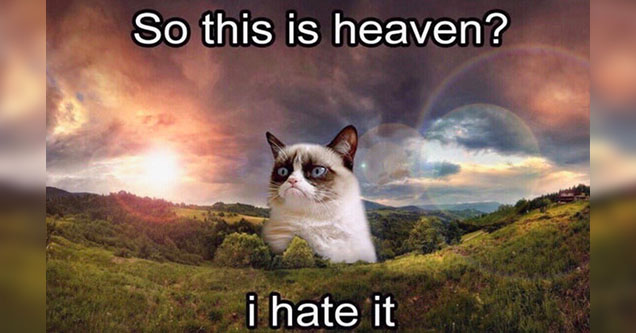 Condolences to the owner. Hope she invested some of that money.

Supposedly the money was held in trust, so there now has to be a court case over who gets the money. I guess the grumpy little bugger didnt even leave a will.

Supposedly the money was held in trust, so there now has to be a court case over who gets the money. I guess the grumpy little bugger didnt even leave a will.

Well, that would be cat-astrophic

Increasiing my carbon footprint while destroying the environment

Blinked 'TORTURE' in Morse code with his eyes while being filmed for propaganda purposes.

Hope God has a formula 1 circuit up there. I feel sure James Hunt will want a rematch.

Judith Kerr, the author and illustrator whose debut picture book The Tiger Who Came to Tea introduced generations of pre-school children to the joyful chaos of uncontrolled appetites, has died at the age of 95 .

Kerr, who dreamed up the tiger to amuse her two children, only started publishing in her 40s, and lived to see the Tiger reach its millionth sale as she turned 94. To her mild chagrin, it remained her best loved single book: “I’ve got better at drawing, obviously,” she told one interviewer.

Over a 50-year career she published more than 30 further books, immortalising a succession of family cats through the naughty but lovable Mog, and bringing to life her family’s flight across Europe as the Nazis came to power in the novel When Hitler Stole Pink Rabbit.

Last week, she was named illustrator of the year at the British Book Awards, although she didn’t attend the ceremony. A new book, The Curse of the School Rabbit, described as a “laugh-out story of a boy, a rabbit, and a lot of bad luck”, will be published in June; Kerr told the Observer in an interview last week, that her greatest fear was “not being able to work”.

Kerr was born in 1923 into the intelligentsia of interwar Berlin, where her father Alfred was a leading theatre critic and newspaper columnist and her mother Julia was a talented composer. As a Jew and an outspoken critic of the rising Nazi party, Alfred Kerr was a marked man, whose notoriety forced the family to leave Germany in 1933, fleeing first to Switzerland and then France, before settling in England three years later.

This journey was at the centre of When Hitler Stole Pink Rabbit, which was published in 1971, the first in a trilogy of semi-autobiographical novels. In Pink Rabbit, her alter ego Anna muses on the cost to children of having famous parents and watches her mother struggle with knitting and scrambling eggs after being deprived of a maid for the first time in her previously cosseted life. The second volume, released four years later, describes their narrow escape when the down-at-heel Bloomsbury hotel in which they are staying is bombed.

Met Bart Starr at the Atlantic City Airport back in the 70s. My dad recognized him and spoke to him. He came over and spoke to my brother and I and sent us signed photographs (they did that kind of thing for free back then). He was a very kind gentleman.

Lee Iacocca goes to the great motor plant in the sky.

Yes, I was sorry to hear that. Ive never read it, but even I have heard of Spy Vs Spy...

Rutger Hauer has died on the July 19th. Thanks bojan for reminding me with your music video post.

The Rutger Hauer Starfish Association announces with infinite sadness that after a very short illness, on Friday, July 19, 2019, Rutger passed away peacefully at his Dutch home.

He leaves his beloved wife Ineke, after they have been together for fifty years.

We at Starfish will always cherish the many unforgettable memories we have of Rutger and his dedication to the Rutger Hauer Starfish Association.

One of Rutger’s last wishes was that Starfish should continue its charity activity and its fight against the AIDS disease, and with Ineke’s precious help, involvement and direction we will follow Rutger’s wish and will do our best to carry on Rutger’s inestimable legacy.

"I have seen things you people wouldn't believe. Attack ships on fire off the shoulder of Orion. I watched c-beams glitter in the dark near the Tannhäuser Gate. All those moments will be lost in time, like tears in rain.
Time to die." His improvised speech from Blade Runner. Although his candle burnt for quite some time longer than his role as Nexus 6 replicant.

True. As do Soldier of Orange, Blood of Heroes or Hobo with a Shotgun. And so many other films he played in. Sometimes real trash, others high artsy drama.

IMDB lists a handful of films wiht him to be released later this year. One is a chinese-russian production of a story by Gogol with charles Dance and Arnold Schwarzenegger?

David Hedison best known for Voyage to the Bottom of the Sea and as Felix Leiter in two James Bond films died on the 18th.  He was 92.

He was a good Leiter. I actually thought he was in more Bond films than he was.