And We Are Off To The Races

And now for the view from neutral Switzerland:

We will have interesting times.


Yeah, good review of the arguments for and against. Also points out another factor that may have influenced the board's decision: in 2014, the AfD retroactively struck a candidate from their list for the state elections. The board let it pass at the time, but last year the Saxony State Court found it illegal. So they may have become stricter on formalities.

could be something as simple as not drinking enough, because the feel of thirst is missing. And has been claimed recently as the reason. My mother was like that. She had to put two tothree bottels of water on the kitchen table and control and force herself to empty them in  the evening to drink enough.

Or something more serious. I'll ready my biro for a snap election.

Meanwhile, Merkel Shakes Again. I guess thrice makes it a legitimate topic of worry about the head of government's health. Not that she would be the first chancellor with such issues. Helmut Schmidt had multiple heart attacks and was found passed out in his office several times. He finally got a pacemaker, which was novel enough at the time to make it into the media despite the respect for politicians' privacy.

Considering how old Schnmidt became, it was actually advertisement for the manufactureres of such devices.

Helmut Schmidt had multiple heart attacks and was found passed out in his office several times.

By his own admission, he passed out more than a hundred times while in office.

If there is any truth to this article times in Saxony will become too interesting for Simon Tan.


Provided the math/guesstimate is close to correct the exclusion of 2/3 of the AfD candidates will result in a state parliament that doesn't even remotely reflect "the will of the voters"*.


*According to the Federal Constitutional Court this 'will of the voters' is what elections are about.

This just keeps getting better and better.

The decision to throw out 2/3 of the AfD candidates was allegedly taken after a debate that lasted three hours. If that's true, it shows that the commission had literally hours of room for interpretation which in turn indicates it was a political hit job by the parties that are going to loose the election.

That's frankly nonsense, as typical for the Achse des Guten. All that a debate lasting hours shows is that it took hours to debate an issue.

Considering that the authors used to be a politician with personal experience in this particular field I wouldn't discount his opinion. Especially not based on where he published it. Based on facts or not, who'd publish something that takes the side of the 'evils right wing populists'? Not the MSM.

*According to the Federal Constitutional Court this 'will of the voters' is what elections are about.

Which is why we have the current grand coalition, that nobody wanted. Cue the Tucholsky quote...

Considering that the authors used to be a politician with personal experience in this particular field I wouldn't discount his opinion. Especially not based on where he published it. Based on facts or not, who'd publish something that takes the side of the 'evils right wing populists'? Not the MSM.

I also have personal experience in this particular field and can think of any number of reasons the debate took that long: They knew the decision would be controversial and wanted to make really sure they got unassailable arguments. They were actually looking for a way to not cut the list for fear of the controversy, and were searching for arguments against it. The AfD member on the board was extensively arguing against cutting the list (highly likely, actually), etc. If the debate had really taken just ten minutes, this guy would also have claimed that it showed the result was already set by sinister forces in advance.

Divorced from personal political opinions - I saw "Sympathizers" this week (currently available in the arte mediathek in German and French), a film about (mostly) artists and intellectuals who were accused of being same for the Red Army Faction in the heyday of the latter's terrorism in the 70s. Made by the son of actress-director Margarethe von Trotta, who was counted among them along with her partner Volker Schlöndorff and others like writer Heinrich Böll, which gave him easy access.

Despite his personal involvement - seems he was present as a ten-year-old kid when Italian police raided Schlöndorff's holiday retreat in search for some terrorists of the Red Brigades - he suceeds in developing a multi-faceted image; some of his interlocutors are rather defensive about their views back then, some rather candid that they were wrong; the son of Heinrich Böll is still bitter about the political attacks by government and media figures on his father, which he blames for his somewhat early death. The interviews are juxtaposed with period statements and critical movies.

Whatever you make of it - what I find striking and ironic are the parallels in attitude and language from both sides back then to the current discourse with the changed background of right- instead of left-wing extremism and terrorism, like the murder series of the National Socialist Underground and the recent assassination of Walter Lübcke. The accusations against sympathizers that they're enabling the violence of anti-constitutional actors from politics and media, and of the state acting quasi-fascist by those so labeled, the debates of what is a "sympathizer" in the first place and who gets instrumentalized by whom, are basically identical.

Meanwhile, though the Greens have slipped a couple points behind CDU/CSU again in national polls as the bandwagoning effect after the European elections wears off, they are still comfortably above 20 percent and are currently projected to win up to 51 districts directly if elections should be held this week. 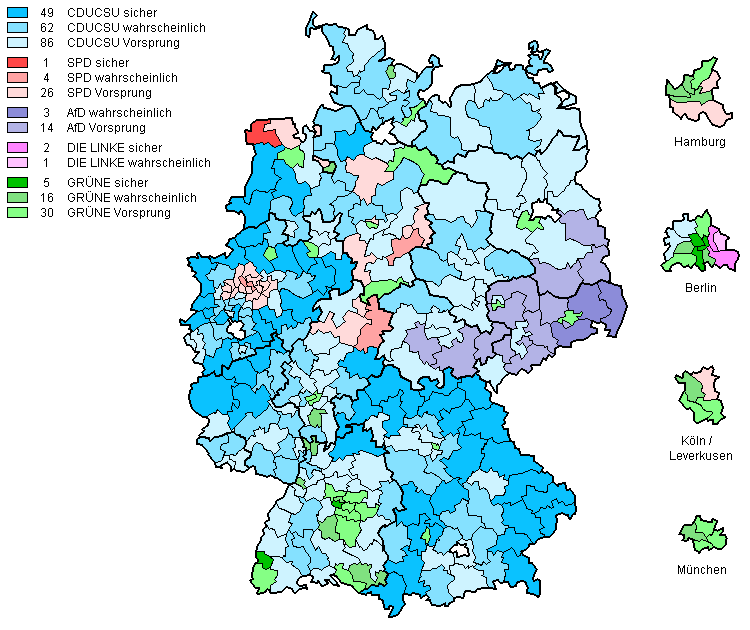 Ever-helpful election.de has a current projection for Saxony state districts, suggesting that the AfD's strategy to run a direct vote campaign in response to the cutting of their state list might indeed prevent an impact on their final result if their candidates in likely districts who got cut (red dots) make it on the primary vote. 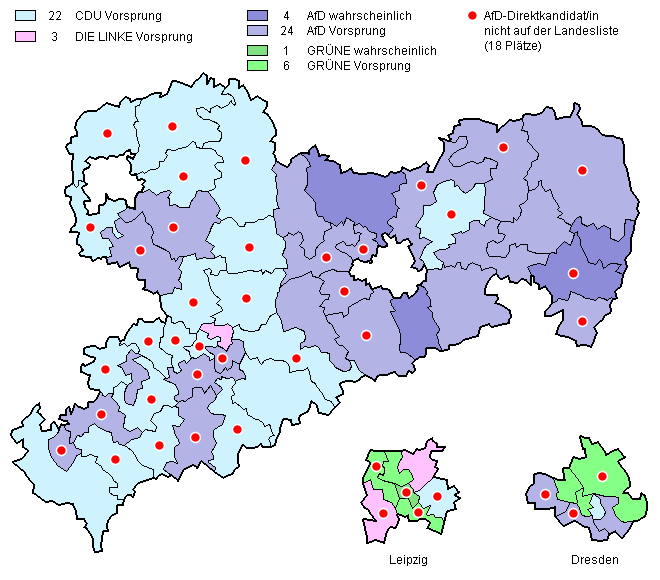 Interesting that the Linkspartei plays nearly no role with directly elected districts anymore. The SPD was traditionally weak in Saxonia anyway. The green districts are in the big cities as usual.

A Green legal expert takes the side of the AfD and it's in an interview with an extreme left paper. It looks like the election commission (=politicians of the loosing parties) really fuckd it up.

The Saxony State Court seems to agree at least partially, since it allowed the AfD to run with the first 30 positions on their list (i. e., before the voting mode was changed at the second assembly) in a preliminary finding. They saw a sufficient likelihood that the board's decision was wrong following an expedite hearing, though there was also an undertone of political consideration; obviously they wanted to avoid a repeat of the election following a regular appeal of the decision afterwards, so gave the AfD a number of candidates which should suffice to fill all the seats they're likely to win.

BTW, the expert in the "taz" interview (one of the authors of wahlrecht.de, my go-to site to keep track of poll numbers) also predicted the court would reject the AfD's complaint ahead of the elections, which shows that you can be right while being wrong.

He meant the Federal Constitutional Court. That one rejected the the appeal for formal reasons because that's for the state's courts to decide.

And the Saxon one kicked CDU, SPD and Linke in the nuts: "A preliminary assessment makes it highly likely that the decision to cut the list was illegal." Nice own goal.

No, the Federal Constitutional Court had already rejected the complaint as a state matter at the time of the interview, as could be expected. He was subsequently refering to the State Court.

Ah, that part. No legal wrangling to delay an election but have another one if the court finds fault with the first.

Why did they appeal to the federal court in the first place? Did they sleep in school or what? Are their lawyers incompetent?

PR? And you never know with the courts. The state constitutional court radically operated from the previous SOP. Probably because of the dimensions of the whole clusterfuck the election board made.

Aside from the AfD member they should be fired for gross incompetence. Not that I think it was incompetence. They thought they had an opportunity and took it.

More election news from Saxony. They held local elections on May 26th and the MSM reported the CDU was the winner. Were they? The state's statistics office published the result for county assemblies but an overview for towns and villages was missing. The office dragged it's feet despite getting inquiries. Only two weeks ago did they finally publish it and guess what: the CDU didn't win, the Free Voters did and clearly so. While the CDU ist just barely ahead of the AfD.

The president of the office one Carolin Schreck who is also the chair of the Saxon election board.

Why did they appeal to the federal court in the first place? Did they sleep in school or what? Are their lawyers incompetent?

Well, it continues the theme from the event that brought them there: either incompetence or attention-whoring.

Candidate: "These show of hands are exactly what is wrong with the way...."