Path Of A Great Uncle In Wwii

9 replies to this topic

Thinking on my own family history and the Air War over Europe...I started digging tonight.

My great uncle, on my Maternal Grandmother's side (her brother)

I just received the latest edition of the Molesworth Pilot and saw the article on the January 23,1943 raid to Lorient. T/Sgt Miles Benton Jones (Green Hornet) evaded with my father along with several others as described below. As mentioned, I was looking for any information on his fellow travellers but other than finding the final resting place of T/Sgt Jones have been unsuccessful.

I am doing some research on my father's Escape and Evasion from France in early 1943. In his debriefing after returning to England in May 1943, he mentions travelling with two Americans and several Europeans from France to Spain. One of the evaders is shown as a Lt. Roper USAAF. My research has found that a Grady W. Roper (Lt) 92 Bomb Group 327 Bomber Squadron was shot down on October 9, 1942 in B-17 #41-19018, piloted by Francis Chorak. It also appears he returned to England around the same time as my father so may be the Lt. Roper mentioned in the evasion report.

My father Sgt Robert M. Kidd RNZAF was shot down that night while piloting a 75 Squadron RNZAF Short Stirling on a night raid to Lorient. He was the only survivor and his crew is buried in the Town of St. Thegonnec.

The following information was sent to me by a researcher in Brussels who was contacted by the author of Conscript Heros on my behalf.

If you or your readers have any further information on these three please feel free to contact me.

There's a small memorial near the border with Belgium for the aircrew who were killed that October morning. 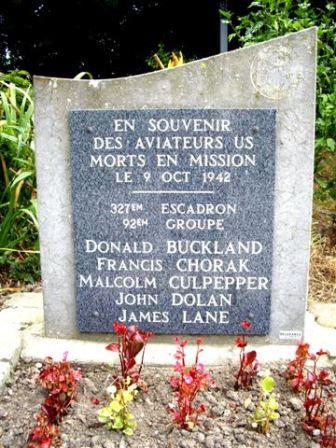 B-17 41-9018, took off from Bovingdon, Hertfordshire, UK at 0900 on a bombing mission over Hellemmes’ railroad installations. They were hit by German AA fire, causing them to drop out of formation and be hounded by nine German Fw-190s. The latter shot off the tail section, sending the plane down. The pilot held on as long as he could to avoid hitting the residential areas, but finally had to bail out. His parachute malfunctioned and he plummeted to his death.

I'm now more curious how he E&E'd across from Belgium to Spain. He passed away in '88 due to cancer. I really only had one long conversation about B-17s when I was a kid at my Grandparents house one holiday in Albany when he was there to visit with the rest of the family.

The things our elders never talked about.  At his funeral, it was mentioned that one of my uncles had been awarded 4 (FOUR) Bronze Stars in SWPAC.  Growing up, I only knew that he had hurt his back in a jeep accident.  He did tell me once that he had served with the 22d Bomb Group, which played a major part in the crazy, desperate combat over New Guinea in '42.

Yeah. things I wish I could go back and ask about.

We need a project to get going on this for Korea, Vietnam, the Gulf War and GWOT.

I'm now more curious how he E&E'd across from Belgium to Spain. He passed away in '88 due to cancer. I really only had one long conversation about B-17s when I was a kid at my Grandparents house one holiday in Albany when he was there to visit with the rest of the family.

Fascinating! All the evaders were carefully debriefed on return to England. The debrief files are probably kept a Maxwell AFB. You might want to inquire.

Hmm. I'll enquire with the nice folks at Maxwell.

Just a very idle thought, the lifelines across Europe were organized by a wing of British military intelligence. MI9 maybe? Ive no knowledge of whether they had any records of American servicemen, but it might be worth throwing it through the British National Archives online catalogue and see if anything on the subject pop up.

Glad he made it out btw.

Also tagged with one or more of these keywords: WWII, B-17E