Well, that made me want to punch Laffin in the face, repeatedly.

This may be worth a read http://www.johndclar...fin_polemic.htm

Me too. Thanks for the link, definitely worth reading.

Even some Americans were fans of Haig (although I have to say I find many other WW1 generals more interesting and admirable). This American WW2 veteran, Earl Pampeyan - http://www.losaltoso...on-honor-flight

has the full name of Earl Haig Pampeyan, so in 1925 there were still a few folks in the fan club.

Nail head interface, and one that is routinely ignored.

I think all of these generals have been subjected to serious criticism in the standard historical works. Haig simply has the added benefit of having been commander of the BEF, so he gets most of the attention in the English language literature. That being said, there are some important distinctions to be drawn here.

It seems to me that one of the most important characteristics of the generals who occupied high level positions for significant periods of time was a certain imperturbability. Simply put, men like Joffre, Haig and Falkenhayn could stand up to the pressure of sending thousands of men to their deaths through decisions that could determine the course of the war and the future of their respective countries. Von Moltke and French couldn't stand up to the pressure. Neither could Nivelle nor, in the end, Ludendorf.

Nivelle of course was elevated for political reasons to a position he was not prepared to fill. We shouldn't underestimate the value of his tactical innovations, but unfortunately that led the French government to believe he could handle diverse strategic and operational problems while also standing up to the intense pressure of the position.

Joffre's primary failure lay in pursuing large-scale, costly offensives before the army had the weapons and techniques for pursuing them effectively. He was capable of recognizing his mistakes and both ending failed offensives and changing his tactical and operational approach. Unfortunately he cost the French Army far too many casualties in 1914 and 1915 while learning on the job.

Falkenhayn made the fundamental mistake of taking on the Verdun offensive when he should have concentrated his efforts on defeating Tsarist Russia. Otherwise his management of the German Army was relatively skillful, and too much credit has been given to Hindenburg and Ludendorf for the accomplishments on the Russian Front.

Haig of course lacked the opportunity to act at the level of strategy or grand strategy, except in the negative sense when he would oppose strategies that could only go forward with the cooperation of the BEF. If he had had some political/diplomatic skill he may have been able to have a positive influence on strategy, but that wasn't meant to be. Perhaps his greatest failings as a general were his reluctance to break off offensive operations long after they had become net losses to the British and his tendency to narrow his focus on small-scale objectives as his offensives started to fail.

If it's not replaced by "Donkeys led by lions" it would be fine. It interesting that the French, who suffered as much the "marching-into-machine-gun-fire" syndrome never went as far.

This has always puzzled me, since the French army suffered large scale mutinies, which didn't happen in the British military. I would have expected the French post-war narrative to have been much more critical of their leadership.

They didn't wait until the war was over, they replaced them during the war. Hence Petain became a hero because he cared for his men's lives, while Foch nearly ended the war in obscurity had he not been called after the Kaiserschlacht

What about Maxwell, Archibald Murray, and Edmund Allenby?  They seem to have been a little more "energetic", or at least did not get the horrific blame that Haig got for the bloodletting on the Western Front. 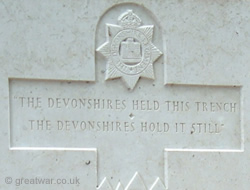 Nice one. That cemetery is bit of a bugger to find, but worth it as it is very atmospheric even amongst those round about.

It's in the fortified citadel of San Sebastian (Mt. Urgull), dedicated to the British fallen during the 1st Carlist War (1833-39).  Sadly the place has been vandalized several times.

I am watching They Shall Not Grow Old, and I cannot imagine the carnage and butchery from the First World War.  And generals who did not care about casualties apparently.  "Throw another 20,000 men into the attack, Rupert!"