Iran to conduct naval joint-training with China and Russia from Dec 27th to Dec 30th in the Sea of Oman and Indian Ocean. Type 52D destroyer Xining will be participating in it.

(Reuters) - China, Iran and Russia will hold joint naval drills starting on Friday in the Indian Ocean and Sea of Oman, China's Defence Ministry said on Thursday，amid heightened tensions in the region between Tehran and Washington.

China will send the Xining, a guided missile destroyer, to the drills, which will last from Dec. 27 to 30, and is meant to deepen cooperation between the three countries' navies, ministry spokesman Wu Qian told a monthly news briefing.

The Sea of Oman is a particularly sensitive waterway as it connects to the Strait of Hormuz - through which about a fifth of the world's oil passes - which in turn connects to the Arabian Gulf.

The drills are also coming at a time of fraught tensions between the U.S. and Iran.

Friction has increased since last year when U.S. President Donald Trump pulled the United States out of Iran's 2015 nuclear deal with six nations and re-imposed sanctions on the country, crippling its economy.

Washington has proposed a U.S.-led naval mission after several attacks in May and June on international merchant vessels, including Saudi tankers, in Gulf waters which the United States blamed on Iran. Tehran denies the accusations.

Tensions have risen in the region not only over Iran's disputed nuclear programme but also over a September attack on Saudi oil facilities blamed on Iran by the United States and Saudi Arabia. Iran also denies involvement.

China has close diplomatic, trade and energy ties with Iran.

But Beijing also has good relations with Iran's regional rival Saudi Arabia, meaning it has long had to tread a fine line in a part of the world where Beijing has traditionally exerted far less sway than the United States, Russia, France or Britain.

Chinese President Xi Jinping is likely to visit Saudi Arabia next year as it is the host of the 2020 G20 summit.

Some pictures from the joint-training. The images include the text because the site is one of those kinds that don't allow text copying, otherwise I would have just copy/pasted the text. 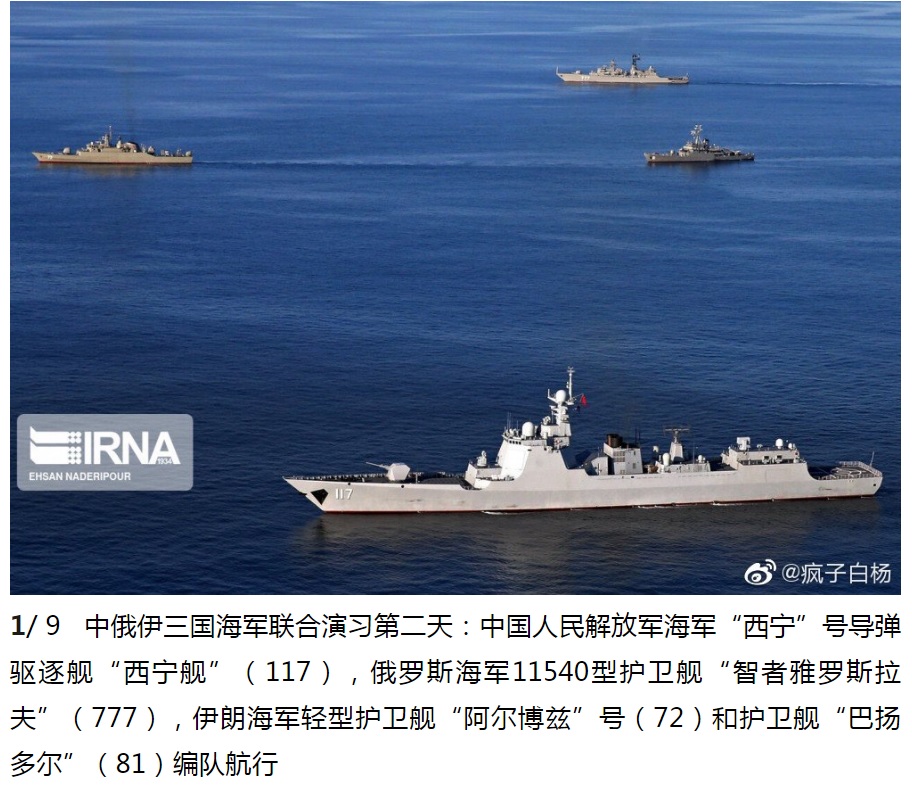 Eight more images in the spoiler 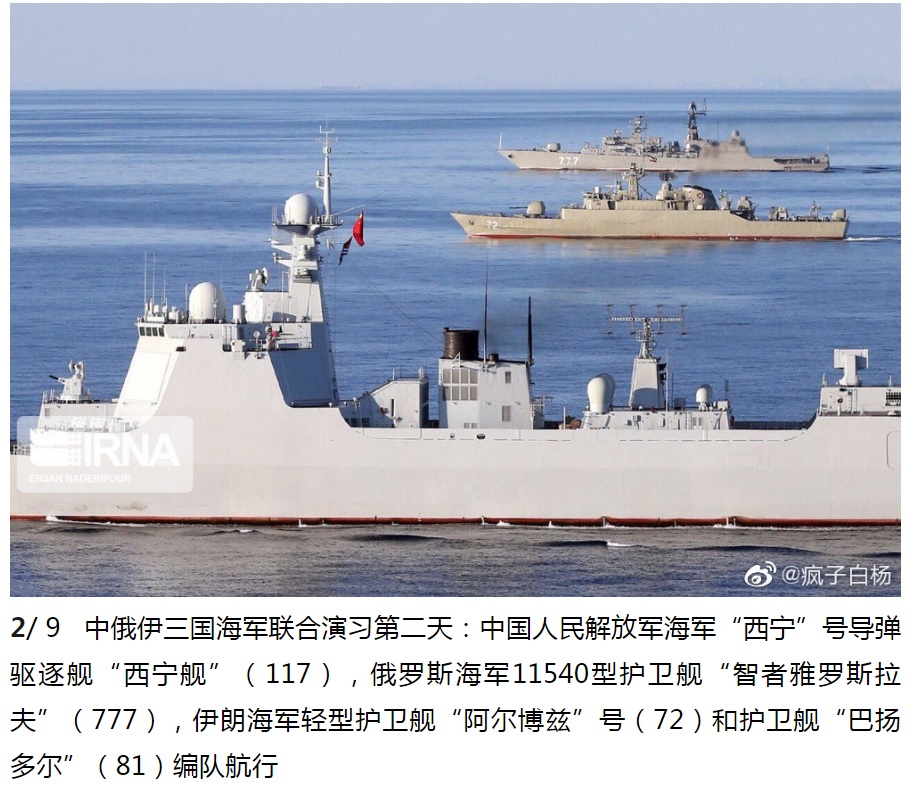 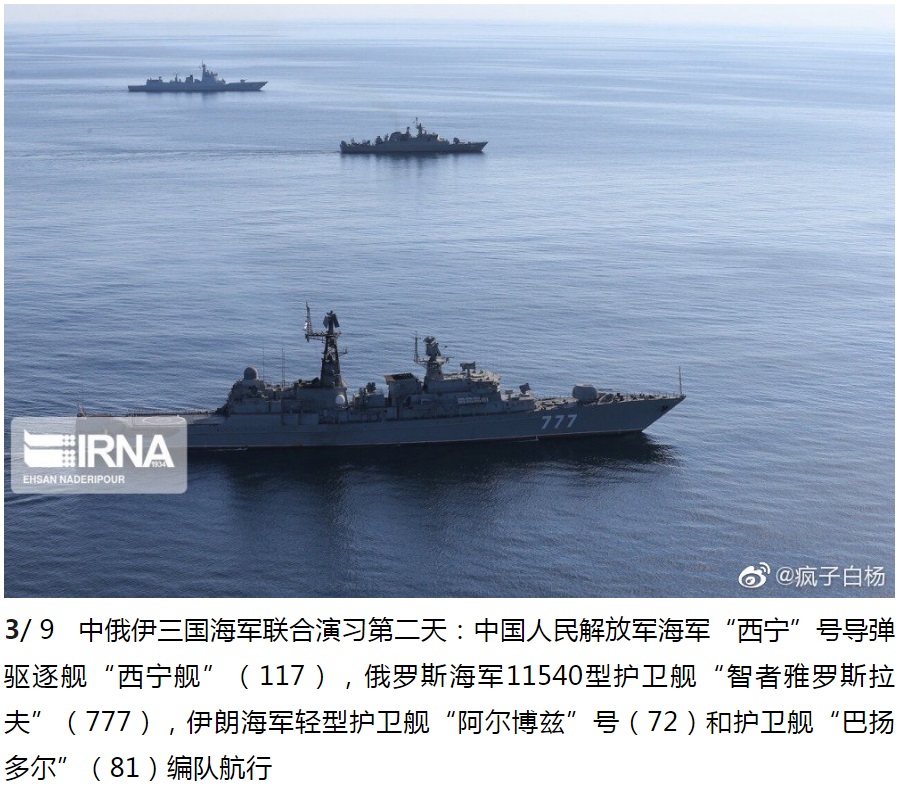 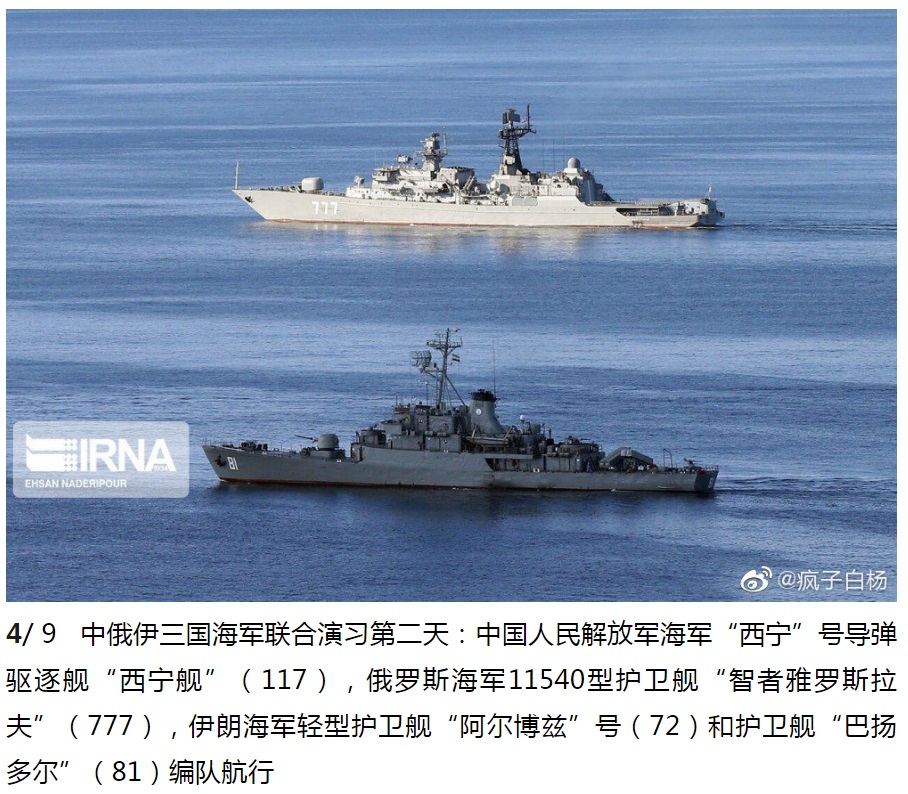 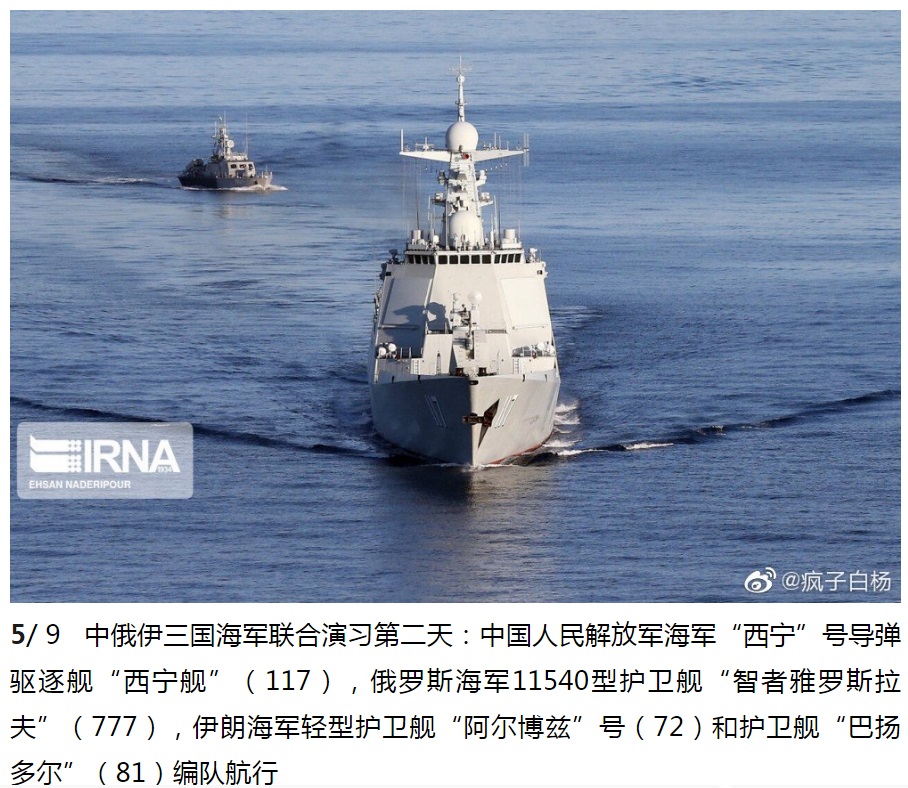 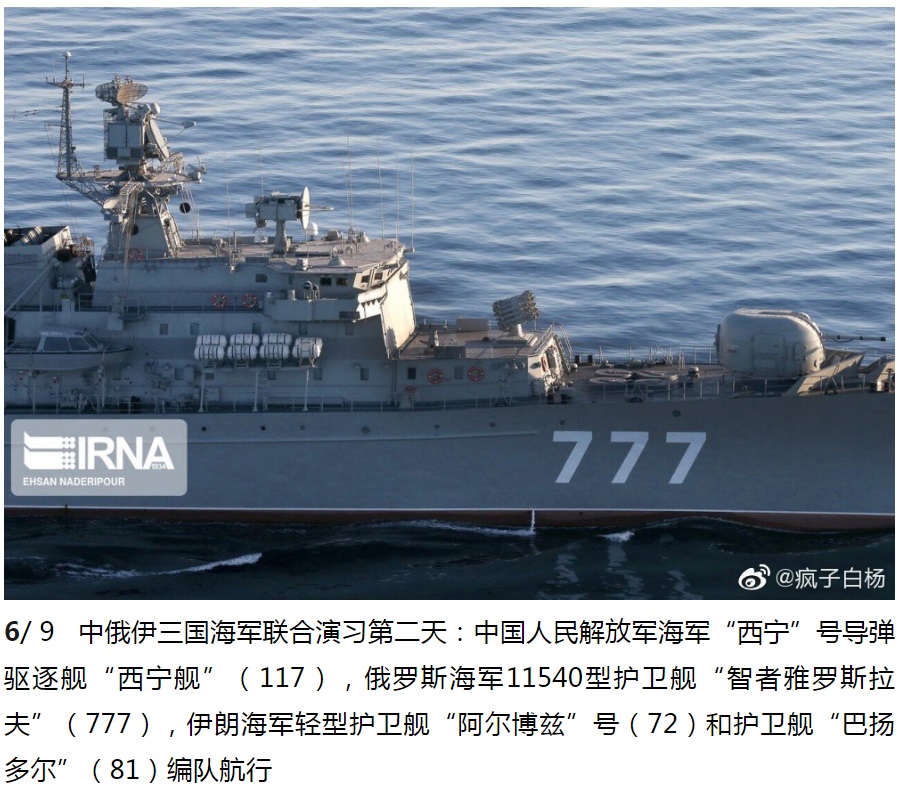 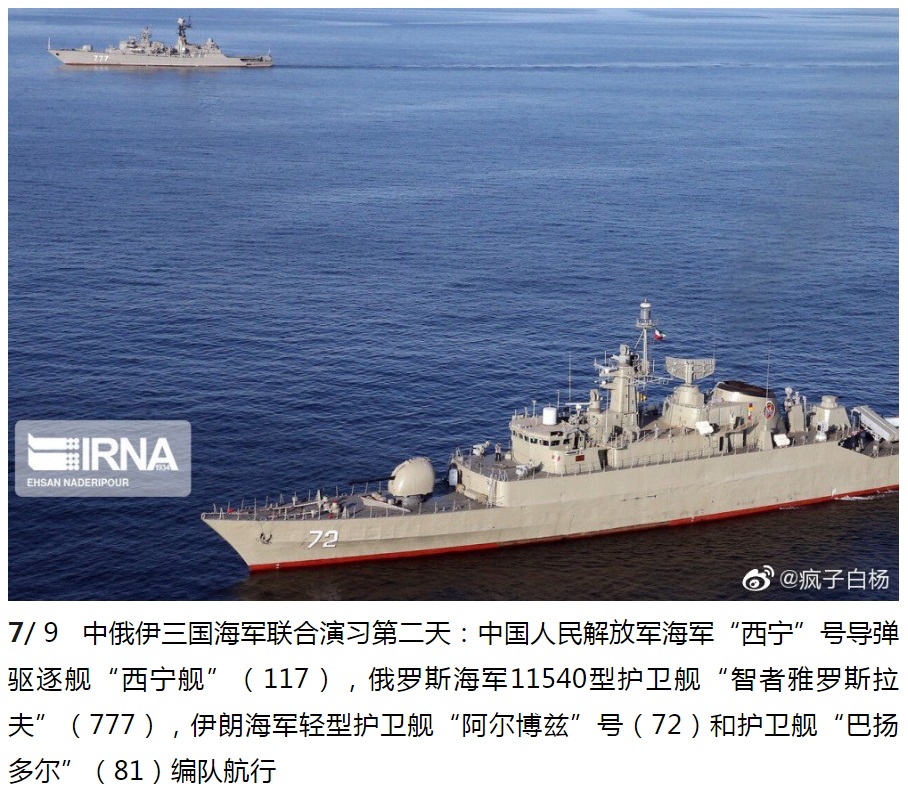 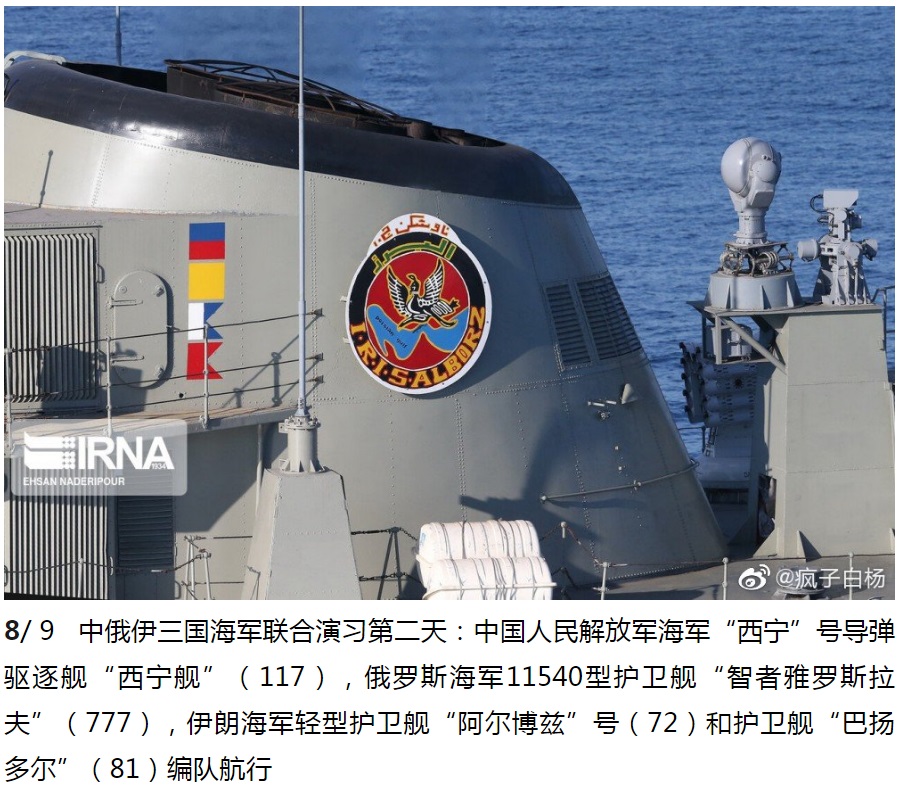 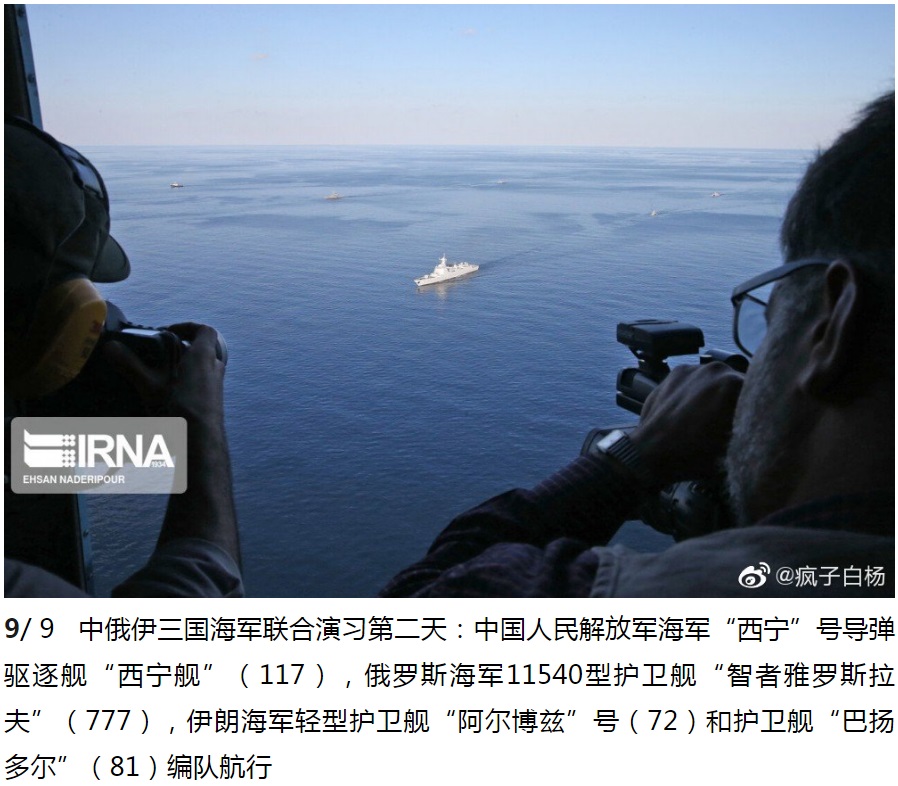 The Japanese cabinet passed the JMSDF dispatch plan. The dispatch will be of about 260 personnel using 1 destroyer and P-3C. The mission will be one year long and ends next year on December 26th although the mission can be renewed for another year. The P-3C will depart on January 11th and first head to an originally scheduled mission of anti-piracy patrol to Djbouti. The destroyer will depart in early February and then arrive and begin its mission in late February, at which time the P-3C will link up with the destroyer. Their patroling area is restricted to the Sea of Oman, the northern part of the Arabian Sea, and east of the Bab-el-Mandeb Strait. In consideration of Iran, waters that border it such as the Strait of Hormuz and the Persian Gulf are not included. The dispatch will have the ability to shoot in order to protect Japanese vessels. While the JMSDF will not partcipate in the US-led initiative, information will be shared with US naval command based in Bahrain.

The (two) P-3Cs have departed as planned and their mission is to start on January 20th.

The destroyer that will depart early next month is JS Takanami. Some close up views of the warship.

Another Tanker on fire in the gulf off the coast of the UAE,  unknown details.

Another Tanker on fire in the gulf off the coast of the UAE,  unknown details.

Some more on that tanker:

Dubai: Two Indian sailors were killed and several others are reported missing after a Panamanian-flagged tanker caught fire off the UAE’s coast on Wednesday, a media report said on Friday.

The Federal Authority for Land and Maritime Transport said the fire broke out on board the tanker 21 miles off the UAE coast on Wednesday evening was quickly brought under control by fire-fighters, the Khaleej Times reported.

Efforts are on to trace the missing persons, it said.

“Rescue and emergency response teams provided relief to the crew after they received a distress call and rescued the tanker’s crew,” the Authority said in a statement.

The daily quoting sources reported that the tanker had around 55 people on board, including 12 crew members at the time of the accident.

Two Indians died in the fire while two others are reported to be critical. Another 10 are said to be missing, the report said.

That's a lot of non-crew on a non-cruise ship. Smuggled oil and coast guards?

JS Takanami departed today a little before 11:00AM. 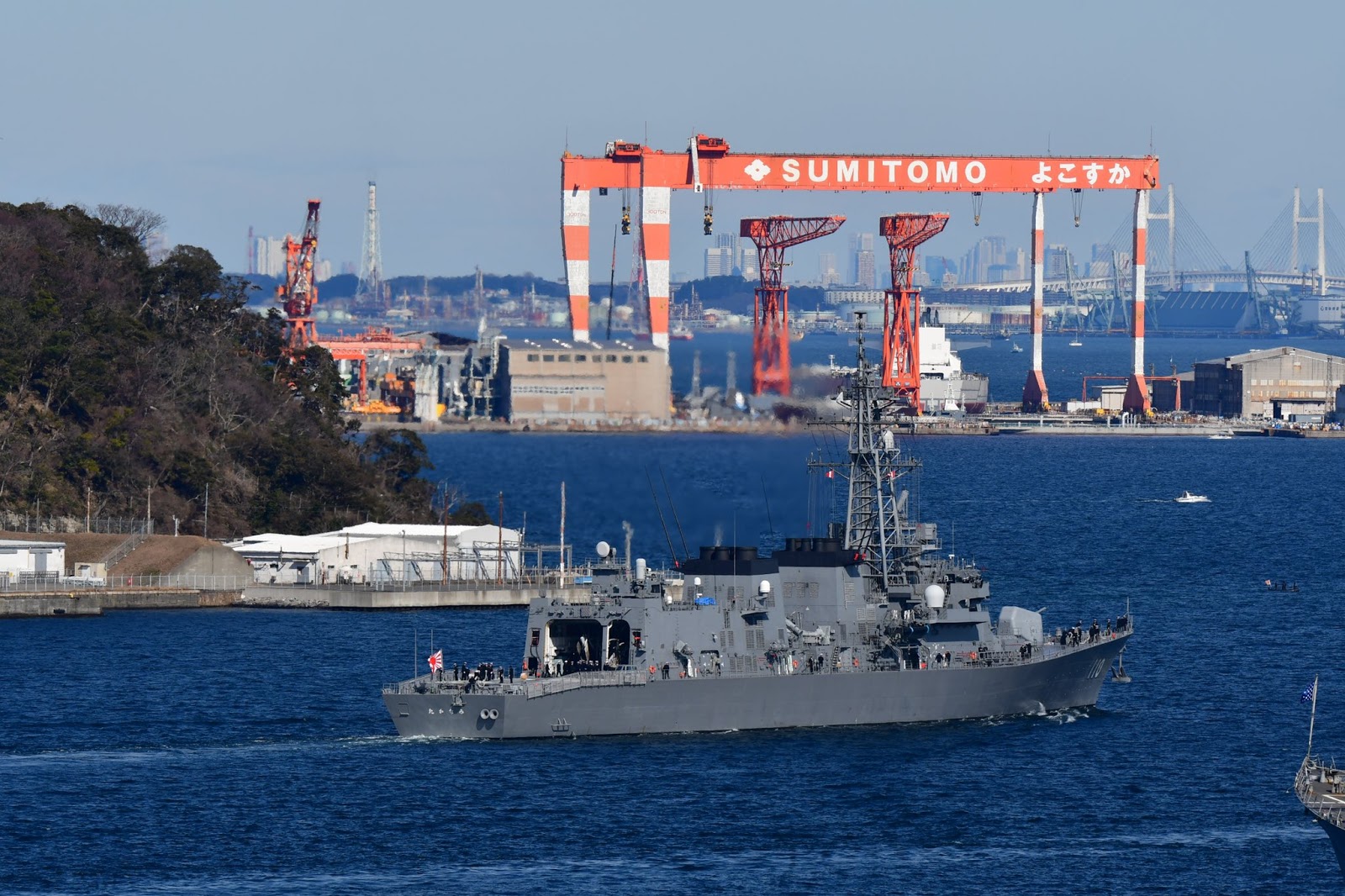 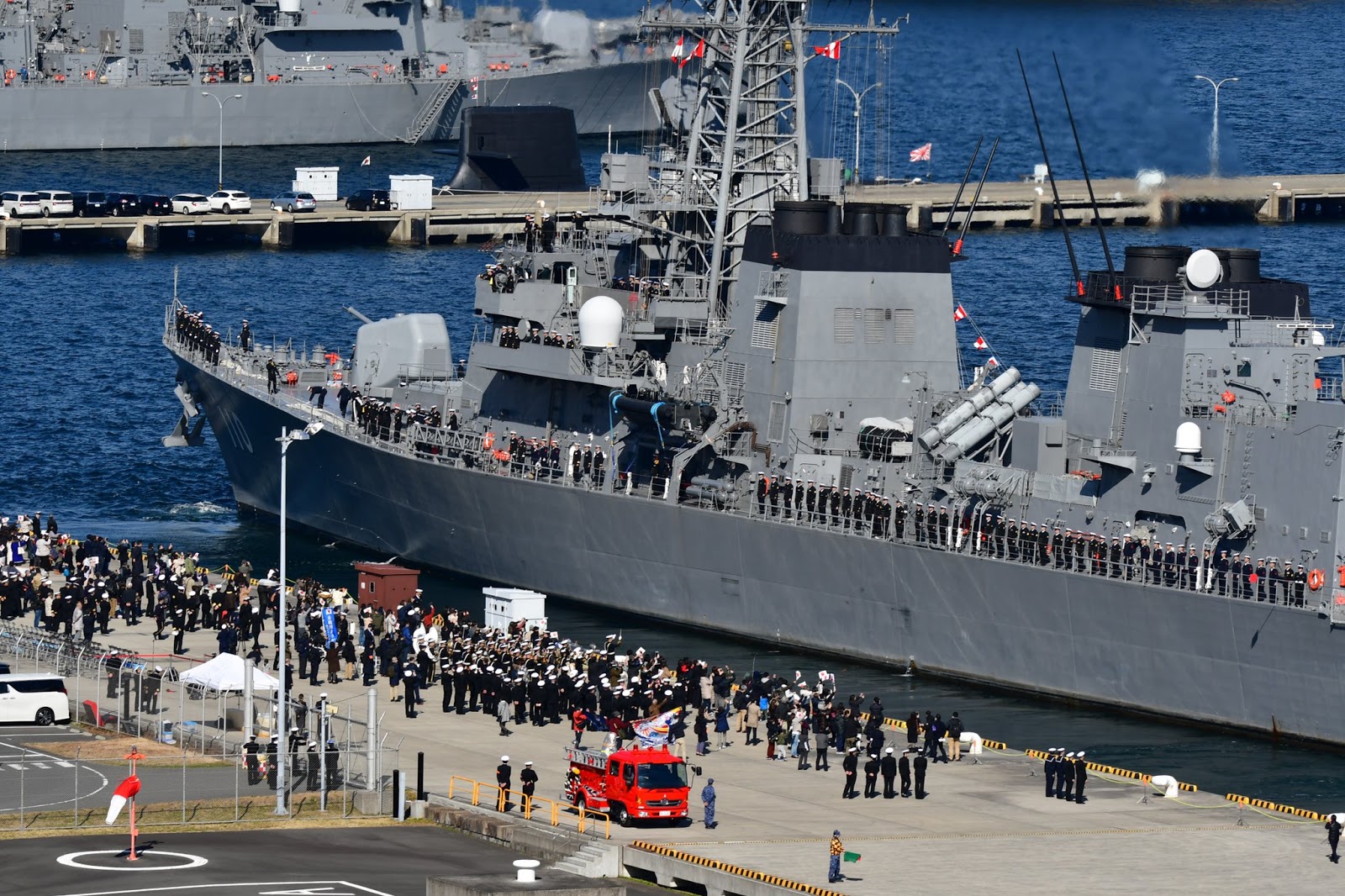 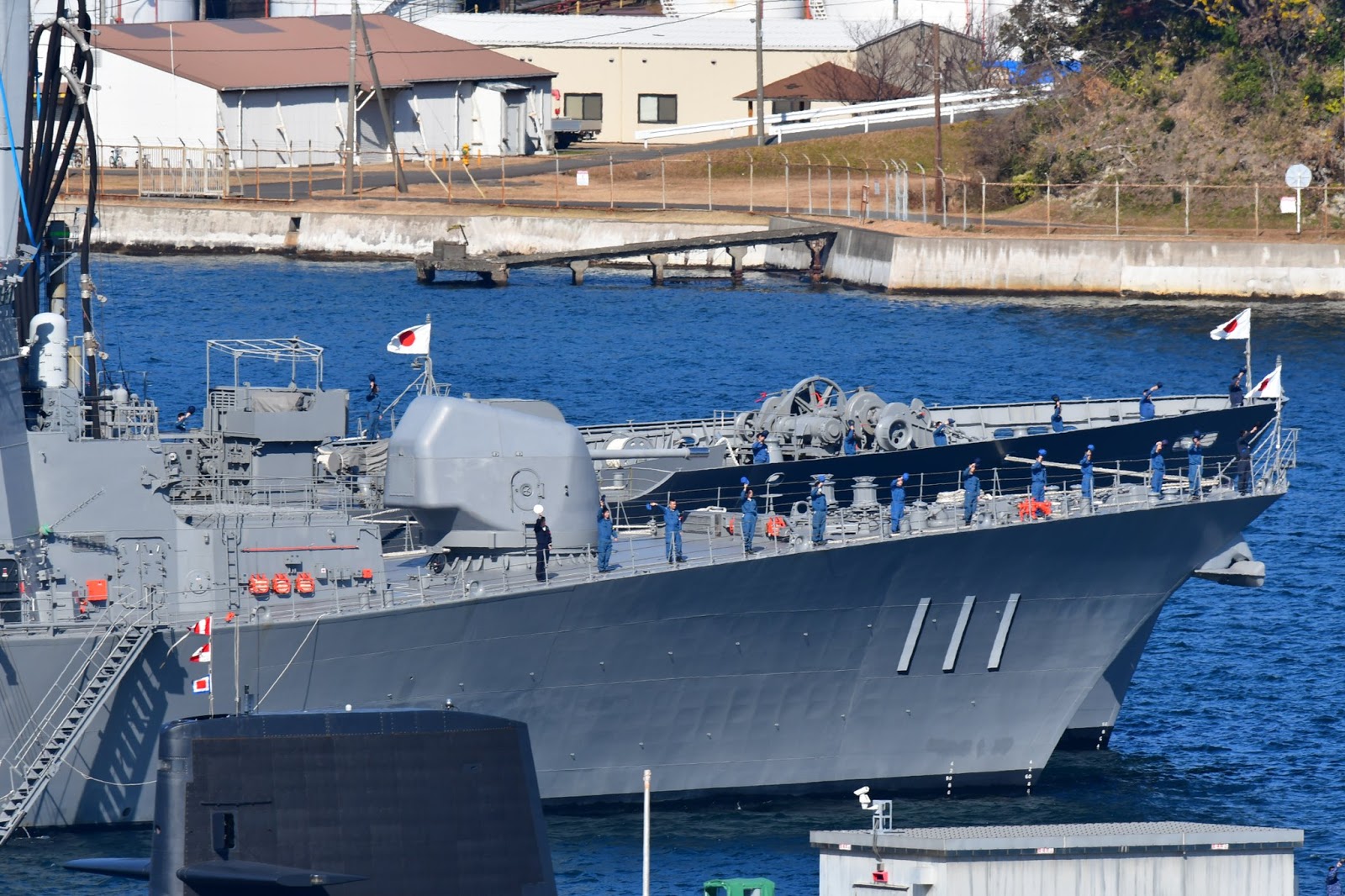 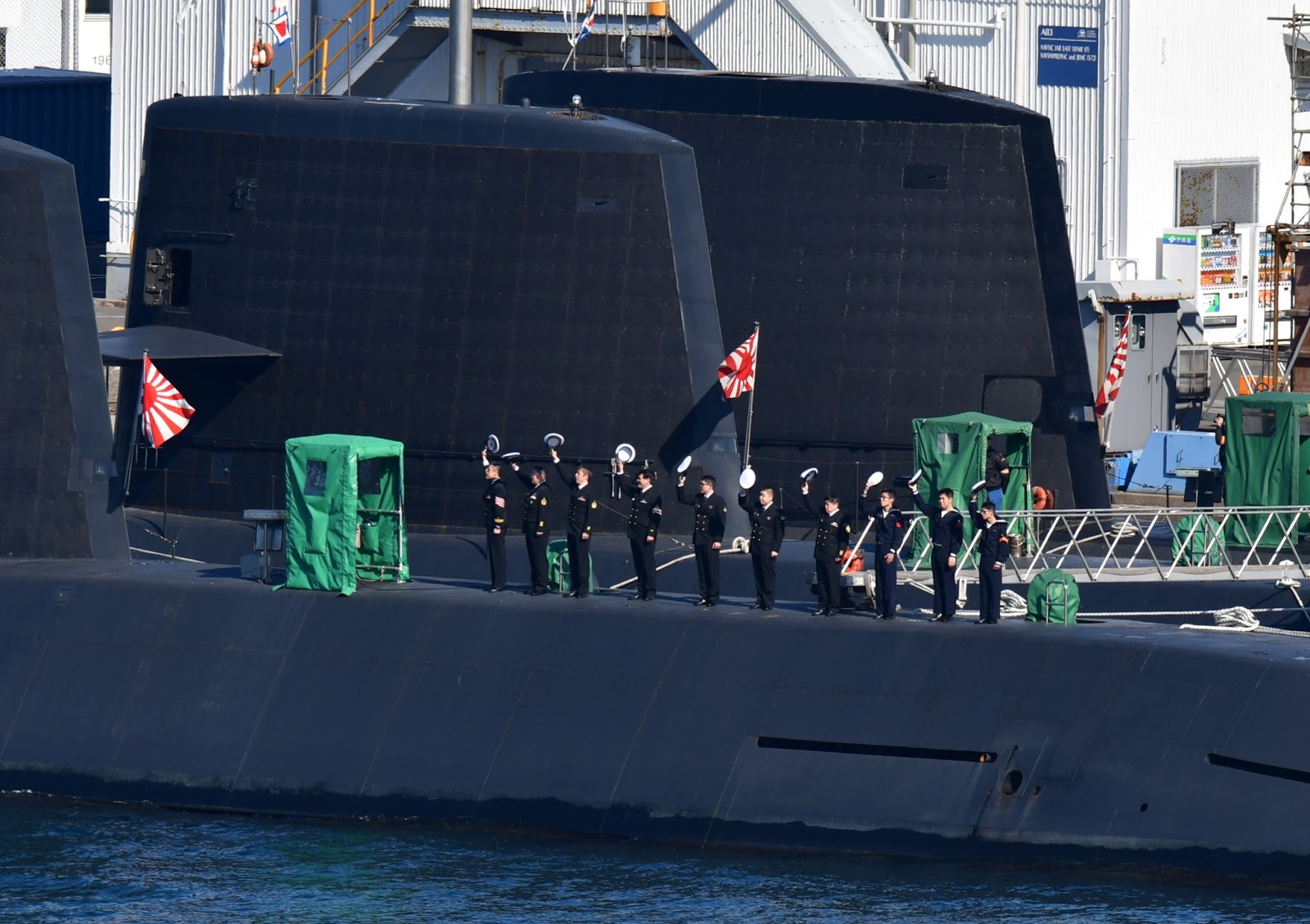 The European-led mission in the Strait of Hormuz (EMASOH) is now operational, the French Ministry of Armed Forces stated yesterday. The EMASOH headquarters, composed of Belgian, Danish, Dutch and French officers, is based at the French naval base in Abu Dhabi.

The Lafayette-class frigate Courbet is the first vessel involved in the operation. The ship will soon be joined by the Royal Netherlands Navy (RNLN) frigate De Ruyter , which left Den Helder naval base on January 28 for the Strait of Hormuz. The RNLN will join the EMASOH starting mid-February.

EMASOH’s goals include an independent situational assessment, the monitoring of maritime activity, and to guarantee freedom of navigation in the Arabian Persian Gulf and the Strait of Hormuz.

European vessels will safeguard the European countries interests in the Strait of Hormuz by enhancing maritime security, and thus contribute to regional de-escalation. The stakes are high since a third of the European needs in petroleum products transits through this strait, which separates Oman and Iran from 40 km.

The Danish contribution to the Strait of Hormuz will consist of a staff officer contribution for 12 months from the beginning of 2020 as well as – pending parliamentary approval – a naval contribution incl. a frigate, an helicopter and up to 155 personnel for 4 months from September 2020.

There is another, similar coalition lead by the United States: the International Maritime Security Construct (IMSC). The IMSC was established to deter malign activity, promote maritime security and stability, and ensure freedom of navigation and free flow of commerce in international waters throughout the Arabian Gulf, Strait of Hormuz, the Bab el-Mandeb Strait and the Gulf of Oman. Participants are the United States, Albania, Australia, Bahrain, Kingdom of Saudi Arabia, United Arab Emirates, United Kingdom.