51 replies to this topic

You can't mod them in?

You can, yes, I actually copied a BRM1 someone had engineered out of a BMP, and that works well. It even has a work around for the Tall Mike Radar, which I was planning on copying to build ZB298. The thing that would take time is modding the png files to turn it into a BMP, but that seems to be doable fairly easily enough in GIMP.

We do have an integrated database editor (I insisted on that since the early days as a freeware modder) and it is possible to do WW2 or modern stuff including years. OK, some of the modern weapon systems can be a bit tricky as they might require additional core mechanics in order to be modeled realistically (what comes to my mind are UAVs, active/passive protecting systems etc.). We are considering moving into that direction as military clients might be interested in Armored Brigade.

By the way, today afternoon we are going to announce our first DLC. It will be a nation pack introducing Italy and Yugoslavia. I have to admit that latter in particular indirectly benefited from wealth of knowledge Bojan disseminated here and elsewhere over the years, so I would like to publicly thank him. Actually, I would extend that to the whole Tank-net, as I learned so many things here over the last 7 years!

And also, on DLC release day (9th May) there will also be a patch which will introduce highly demanded Campaign Generator, which is actually a bigger news!

Looking forward to the campaign generator. Ive actually done a modern British Army OOB which im eager to try out.  Ive also started on a map of Narva in Estonia, which I might even finish one day.

Just to let you know


On the plus side, you only need four of the former to model our MBT deterrent posture in the Baltics

User CCIP-subsim is still working on a large mod for Armored Brigade, currently focusing mainly on the Chechen Civil War (1994) and the First Chechen War (1994-1996), with a more limited ability to represent the Second Chechen War (1999-200x) as well.

-(new) Ten unique scenarios designed for the mod and Grozny map - focusing specifically on actions of Group North on December 31st 1994 and January 1st 1995 (2 large scenarios, 8 small ones; 6 for the Russian side and 4 for the separatists).

And many, many others!

The mod is still a beta but judging by the immense effort put so far, even this earlier version adds tons of material and new content.

Kudos to CCIP-subsim for this great work! 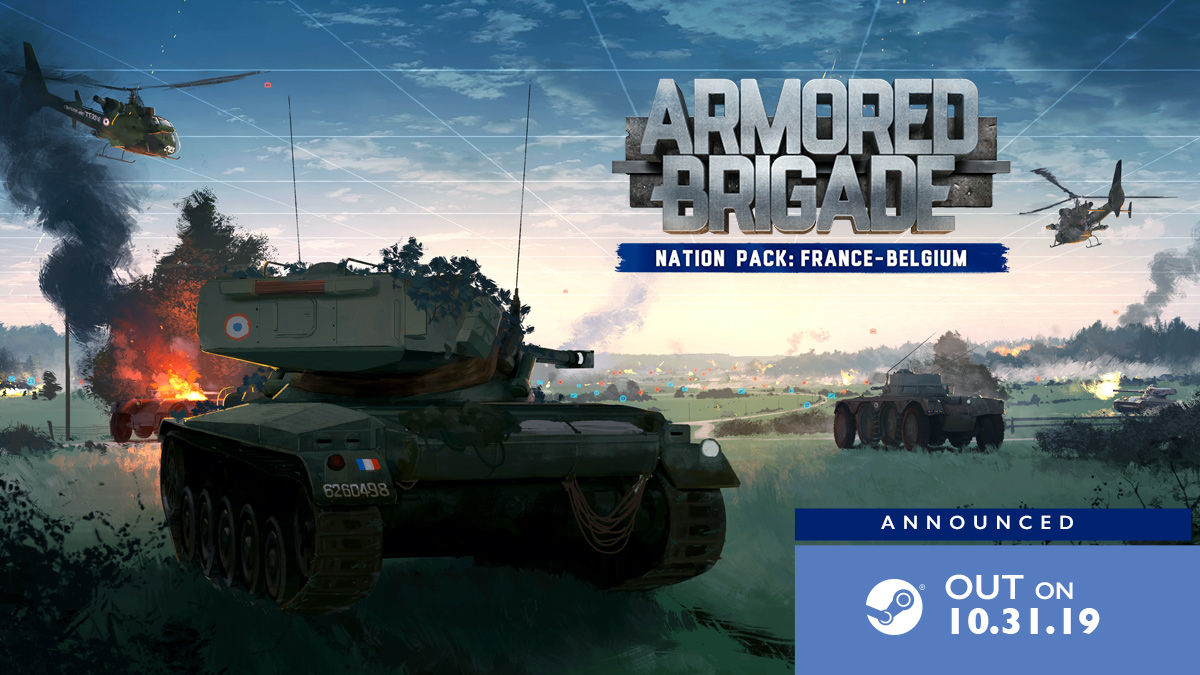 We are very proud to reveal the second DLC we are working on. After covering the struggles of the southern front between Italy and Yugoslavia, it’s time to refocus on north-central Europe. France and Belgium are indeed the protagonists for this second Nation Pack, bringing their armed forces in a new map, the Ardennes. Check out the product page for more details.

Armored Brigade and both the Nation Packs will be out on Steam on October 31st.

Summary of the features:

A striking feature of the French formations of 1970s is the extent to which they were tank-heavy, due to their intended mode of operations. Their tactics were closer to US Armored Cavalry Regiments (or, indeed, their own pre-WW2 Division Légère Mécanique) in that they were not intended for holding ground. Like the DLM of 1940, the mechanized regiments were to operate like the earlier dragons portes, locating and delaying the enemy and preparing the situation for a counter strike by the tank regiments. However, during the 1980s the heavy manoeuvre forces saw an increase in the proportion of infantry, through the attachment of motorized infantry divisions to the corps headquarters, addition of VAB-equipped infantry regiments to infantry divisions, and an increase in the number of infantry companies in mechanized regiments.

As host to NATO since 1967, Belgium has always placed great importance on functioning as a reliable and credible ally. Despite the small size of its population and demanding colonial commitments, Belgium managed to make a significant contribution to NATO collective defence, deploying half of its Army to the FRG as part of the Belgian I Corps. The remainder of the army comprised the Forces of Interior responsible for the defense of the home territory, made up of regular army units which would be augmented in wartime by the local gendarmerie and reserve forces. In addition, the Forces Interior were supplemented by a regiment of elite para-commandos with two airborne infantry and one commando battalion. However, much of its equipment remained obsolescent; its main battle tank, the Leopard 1(BE) was of 1960s vintage and its M75 and AMX-13 Mod 56 APCs, as well as its Alouette II helicopters were almost museum-pieces from the 1950s. However, the Army went through a modest re-equipment programme through the 1980s; upgrading its APCs and artillery, increasing the numbers of ATGMs and replacing most of the Air Force’s fast jets with modern aircraft. Nevertheless, the Belgian Army of the Cold War remains a very interesting and challenging faction.

P.S Multiple stacking limit (fixing all pathfind and traffic congestion issues) is currently available as open beta patch, and will be released as standard patch soon, together with plethora of other improvements

I meant to say, I tried out the campaign creator the other day. I like it a lot, the only think I can think of as an improvement would be crew skills that develops with kills, as we had with Steel Panthers. (and maybe ARV's)

Glad its making it to steam, I hope you have a lot of success with it.

This is now on Steam. I bought it again, just so I could gain access to the DLC packs.

Indeed! And in order to celebrate this important milestone, Armored Brigade (base game) and the first Nation Pack (Italy – Yugoslavia) are being discounted by 30% off. This promotion will until November 8th.