Mali, The Latest Front On The War Agains Al Qaida

142 replies to this topic

This has been on the back burner for some time, but it seems that it finally boiled over. Algeria is still sitting this one out, but it's expected to join the show as its southern border is menaced, and the rebel groups are a mishmash of everything under the sun, from laicist to radical islamists mixed with Tuaregs. Beau Geste times down there.

keep up the good work

This is shaping up to be Tchad part deux in that sense. An incompetent Army is overran and the French step in to stop them until the locals get up to speed.

A quick summary of Operation Serval follows, from the French Ministry of Defence:

9th January: in a fight lasting 5 hours in the Konna region, the Malian army gets it ass handed to it by the rebels with numerous killed and wounded. After it the Malian president requested help from the French as there was a risk of the rebels taking over the country. The French answered by deploying forces to Mopti and Sevare to support the Malian Army.

11th January: Gazelle helicopters armed with HOT missiles and 20mm cannon hit a rebel column, destroying 4 vehicles and forcing it to withdraw. Lt Damien Boiteux is hit and dies from his wounds (RIP).

13th January: 4 Rafales from St Dizier supported by 2 C-135F hit terrorists camps in the North and land at N'Djamena (Tchad) to reinforce the group there. The company from 2nd RIMa arrives at Bamako from France. The RAF makes a C-17 available to deploy more men and materiel.

By my count, they currently use six Mirage 2000D, four Rafales, two Mirage F1RC, three C-135, plus a couple helicopters and assorted Transalls flying in troops, total of about 20 aircraft mostly based out of Chad. About 1,000 personnel involved, including two companies of marines securing the Bamako airport and Foreign Legion personnel; spearhead was a special operations platoon acting as FACs. ECOWAS is trying to move its forces in-country early, eventually planned to number 3,300 but lacking heavy weapons they have been scrounging the Europeans and Israelis for.

According to Le Monde the Bamaka force was reinforced by a column of forty French light armored vehicles arriving from Ivory Coast on Monday-Tuesday night.

See the units in my post, a nitpick is that the RIMa are not exactly Marines as they are part of the Army and their lineage runs to the colonial regiments. In France, the marines are the fusiliers marines and the commandos marine.

I know, and assumed that everybody here does, too. 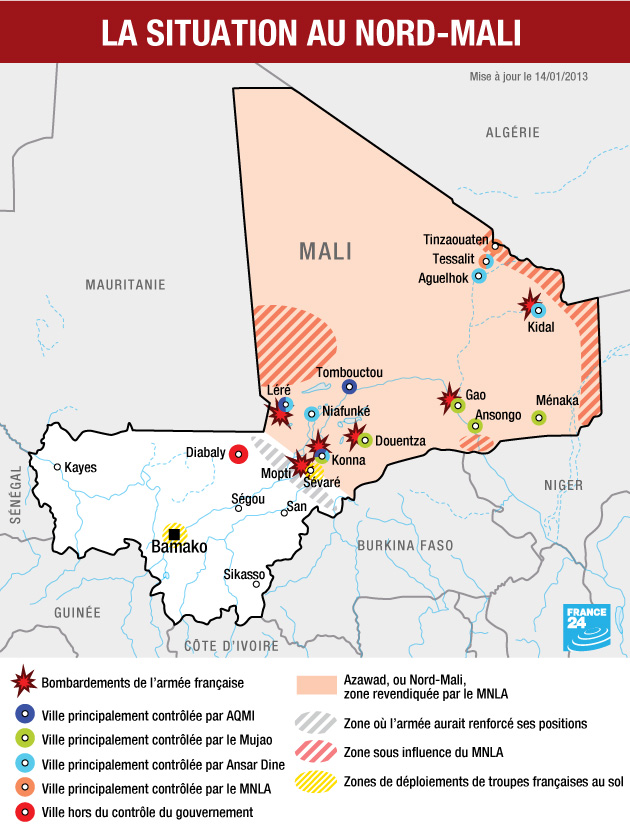 Senor Piqui......anyway, its all rubbish since the djihadis are running roughshod over the Malian Army that is demoralized and lacks leadership. Did not help that the Army deposed the idiot President and was basically slapped down for doing so. The coup was led by a Captain...suggesting how shitty the leadership is. Then they were told to 'get with the agenda' and wound up eating crow.

But we covered all this....months ago.

If you think it is Mali that is the spur, you would be wrong. All this puts the Uranium Highway well within striking distance.

You think they'll send Val Plame out to fix this? She being a sekrit agent and all. Like Bond.....only with titties.

Naah. The French have been doing this sort of thing forever. Who do you think taught the Tchadians how to trash Gaddafi's tanks with Toyotas? Who supplied them with the Milans, HMGs, RCLs, etc., showed them how to mount 'em on the Toyotas, etc? That sort of war doesn't need "tremendous" logistical support. A couple of borrowed C-17s (the RAF has obliged) should do just fine, & if they'd had the A400M in service on time, the C-17s wouldn't be needed. Longer-term, supplies can go by ship to Dakar, & be driven from there. There's even a railway to Bamako, though through trains stopped running a couple of years ago. Plenty for a light AFV war with air support.

As for manpower - the French won't be fighting lots of land battles with infantry or heavy armour. They'll be supporting, training, & encouraging the locals, & raiding - just as they did in Tchad - & using light AFVs. A small force will do, just as it did there. The rebel forces aren't large. Unlike Libya, there's no air defence network, no hundreds of tanks, no heavy artillery, no jet fighters. The rebels have MANPADS (probably from Gaddafi's stocks) & light AA guns.

BTW, the no. 2 in Popski's Private Army was French (if you count Corsicans as French) - Jean Caneri. I don't know what happened to him after 1945, but I know that the Free French saw PPA & the LRDG in action.

Meh. The US has had people in the area for over a decade now. We've been trying to "stabilize" the area conducting FID and other similar missions for a long time now also. It reportedly suffered since all the SF guys who were supposed to work this AO were being sent to OIF/OEF instead, but I have no 1st hand knowledge.

Personally, I say turn it over to the multinationals, let Standard Oil/BP/General Electric deal with it. US TLA's can go in and kill shit on an "as needed" basis. S/F.....Ken M

No oil, but maybe Areva can lend a hand

Sorry...they are busy being hobbled by the EU.

You think too small my friend.

"If you want Nigeria, you need to pacify here, here and here and keep it pacified also."
{Big slavic dude with no neck}
"Nema problema"

France reportedly plans to deploy up to 2,500 personnel total for up to four weeks, apparently hoping that ECOWAS will take over after that. Germany may contribute four C-160 and a MEDEVAC A310 to support movement. EU foreign ministers will make an early decision on the long-planned training mission for Malian forces on Thursday.

I don't see this problem going away in four weeks. It seems like less than a dozen fighter-bombers were involved--that is really having a profound effect? I could see it making motorized movement directly to the front more dangerous--how prolific is this rebel force?

I don't think Islamist rebels are that strong (especially after their relationship with Tuareg movement fell apart). More likely it's the abysmal ability of Mali military that has allowed them to take half of the country.

There, it's more of a matter of holding the front until the clans (ECOWAS) are called and the Malians reorganised to take matters in their own hands.

I don't see this problem going away in four weeks. It seems like less than a dozen fighter-bombers were involved--that is really having a profound effect? I could see it making motorized movement directly to the front more dangerous--how prolific is this rebel force?

The numbers involved seem to be small, much smaller than in Libya. The French have also sent AFVs. A convoy drove up from Cote d'Ivoire, reported to have 40 AFVs including ERC90s (see below - but obviously not in Mali) , & more are reported to be on the way.

But I think they want some Tigers on hand before they are going to make much headway. Makes me wonder if we may volunteer a flight of Apaches before this is over.

Yeah. A Gazelle crew member was killed in action already. If it was aTiger probably wouldn't happened.