He was giving a speech in front of 26 soldiers wounded in various encounters, mostly in Marawi. He conferred upon them the Order of Lapu-Lapu and gave them P100,000 each.

Duterte said he will soon ask military officials to fly to different countries to negotiate for the purchase of defense equipment.

“I will ask military officials to go to different places to negotiate immediately,” said Duterte.

He said the Philippine government can go for affordable loans, if it will not be possible to get the equipment for free.

“If we’ll have a hard time asking for it, because it’s embarrassing also to always ask, let’s get a soft loan, payable in 25 years,” said the President in a mix of English and Filipino.

The Philippines will get the new equipment “maybe next year,” he added.

Duterte again promised to only get new equipment for the military and police, instead of second-hand purchases.

“Everything I will buy for you, all will be new. None of the purchases during my time, for the Armed Forces and police, will be second-hand,” said Duterte.

Newly made (not second hand) and stated purpose for "rebellions". So no Apache. Unfortunately I don't think Japan has anything to offer unless they can quickly whip up a version of the OH-1 with a gun and a pair of rocket pods, but somehow, I can't imagine them doing it on short notice.

So, what are the options?

A fairly long blog post about the Philippines consideration of buying improved Kilo submarines from Russia.

MANILA – The BRP Tarlac (LD-601), one of the Philippine Navy’s two newest and largest sealift vessel, was met and escorted by Chinese and Japanese coast guard vessels last Sept. 24 as it sails near a disputed group of islands in the Pacific Ocean on its way to Vladivostok, Russia.

This was disclosed by Naval Task Force 87 public affairs officer, Lt. Eduard Pablico, in a statement sent to reporters Tuesday.

He added that the crew sighted five ships approaching BRP Tarlac while underway off to a group of disputed islands known as Senkaku Islands in Japan and Diaoyu Islands in China.

"The vessels were later identified as two Chinese and three Japanese Coast Guard ships. The coast guard vessels positioned both at the left and right side of BRP Tarlac following a parallel course," Pablico added.

The Japanese and Chinese vessels altered course and separated upon reaching the north east vicinity of the area.

The event manifested the relevance of maintaining communications at sea and the Philippines' good relations with the two countries.

Earlier, a Chinese vessel in the vicinity contacted the PN ship informing the BRP Tarlac that it is transiting on their exclusive economic zone and wished the Filipino craft a safe voyage.

"A similar call was also made by the Japanese Coast Guard within the vicinity. The Japanese and Chinese vessels made alternate calls through voice radio on separate ocassions," Pablico added.

BRP Tarlac commanding officer, Capt. Estelito Lagadia, said aircraft conducting aerial surveys spotted them and informed them that they can call Channel 16 if in need of any assistance.

"I said thank you for your assistance. We are on passage for Russia," the naval officer stressed.

BRP Tarlac left Manila South Harbor on September 21 for the PN's first port call to Vladivostok, Russia. She is expected to arrive there by October 1. (PNA)

She went along the wrong alley.

Some new artillery will enter service with the Philippine Army in a few years. 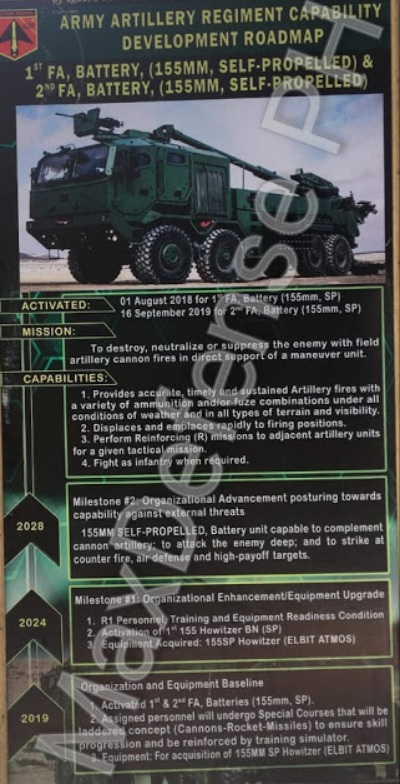