...there's always the possibility of a brain tumor. It's known to initiate (sometimes vile) personality changes. There may very well be a tragedy behind this tragedy. The only thing that can be safely diagnosed is the AfD's "singular cause attribution syndrome" (SCAS, aka. xenophobia) where about everything in Germany is the fault of 2015.

It did get worse that year. Though the immigration mess started decades earlier.

Sure. But it's a fallacy at best, or threadbare propaganda, attributing every single issue that this country may have to nothing but this one cause. And the first response I heard from the AfD in the evening news was that the only solution to people pushing other people in front of approaching trains was to curb immigration. Forget about trains approaching platforms at slow speed - not the issue!  Forget barriers at platforms - will never work! It's all about immigration!

Please excuse me if I can't take a party seriously that has myopic spokesmen like this.

Please excuse me if I can't take a party seriously that has myopic spokesmen like this.

I never said that I took other single-issue parties more seriously. But that's classic "whataboutism". It doesn't matter if others are stupid in their own way. Stupid remains stupid. AfD stupidity is however more suitable to corrode our society at large, so I'll remain more critical of them, particularly since they want to present themselves as the "voice of reason", "true conservativism", etc.  No, they are xenophobic first, foremost, and almost exclusively. That's not to say that there are no immigation-related problems, but the idea that you can fix about any problem in Germany by stopping immigration is pure demagogy.

"AfD stupidity is however more suitable to corrode our society at large,..."

IMO the other way round. The stupidity of our society is the fertilizer that makes the AfD grow. If one is opposed to a Greater EU/EUSSR, green deindustrialization and uncontrolled immigration one has no alternative but the the alternative.

They may exploit that sentiment, and others may be guilty of neglecting this aspect, but there are hundreds of other parties who aren't mainstream but also "not the AfD". The AfD has drifted too far to the right, and they are, pretty much without exception, Putin's sock puppets. If you think you'll help the country by voting for those who would rather see Germany as a satellite of Putin's Russia, there's nothing I can do to stop you. But don't kid yourself that you're doing it out of patriotism and for the love of the country.

Has it been reported here yet? The saxonian constitutional court has ruled  to include the candidates from the second list up to number 30, because the block voting started with 31ff. All thirty candidates would mean 25% of the saxonian parliament of 120 seats total (not counting possible overhang). Smells like they did this to save face and quiet the waves and to prevent a reelection, because all other parties vote the rear places on their lists in blocks as well. And nobody in the block voted places has complained about it. The actual decision if the election council acted legally, is planned for 16th August to be made before the elections in Saxonia. https://www.spiegel....-a-1279043.html

Has it been reported here yet?

Has it been reported here yet?

I must have missed it then.

Well, "Off to the Races", actually.

Who can keep track of all those Germany threads anyway.

Ssnake, what other anti-EU, anti-Green ect parties are there that are above 0.5%? The AfD's appreciation for Putin is a thing I don't like about them but you can't have everything. Besides, its not like a pro Russian, anti American attitude is unusual in German politics.

And now for something different: Terror investigations.

Ssnake, what other anti-EU, anti-Green ect parties are there that are above 0.5%?

What's that for a kind of an argument?

The AfD was below 0.5% not too long ago, so were the Greens.

Ssnake, what other anti-EU, anti-Green ect parties are there that are above 0.5%?

What's that for a kind of an argument?

The AfD was below 0.5% not too long ago, so were the Greens.

You can thank the 5% threshold for that. Parties have to jump that one before anyone takes them seriously and actually votes for them.


So they can rush into a coalition with the Greens? Not that they need to do that to fuck their voters. One with the SPD will suffice as 2013 demonstrated.

Both of you: Exactly.

But your conclusion that the only remaining alternative is to vote AfD is still a rationalization.

You have just described democracy.

2013 chart of top non-German nationalities in Berlin. It's interesting how lasting the effect of the city's Cold War history has been. Most evident is of course that Turkish pluralities (red) are confined to the former western part, and concentrated in areas near the former Wall which were cheap during the "guest worker" period, while Vietnamese (brown) are clustered in the former east.

But the former Allied powers are also conspicious: Russians (light green) in the east, though also in the western borough of Charlottenburg (AKA Charlottograd) where refugees from the 1917 Revolution formed a parallel society as early as the 1920s; Americans (light blue) in the former US sector in the southwest, but also in the embassy district Unter den Linden (where they are followed by French and Italians) and north from that around Oranienburger Straße (where I suspect it's mostly American Jews in the area around the Grand Synagogue). The orange blotch is Brits around the Olympic Stadium, where the British HQ was located.

Poles (grey-blue) are everywhere, of course. I have no real explanation why Italians (yellow-green) seem to be concentrated in some eastern areas, nor why Motardstraße in Spandau is an ex-Yugoslavian enclave of mostly Serbs (dark green), followed by Bosnians and Turks for a total of 70 percent population with immigration background. The big white patch is Grunewald, a largely unpopulated wooded area; the purple area to its west are Bosnians, this time around followed by Serbs and Poles.

Interactive version with all nationalities stated. 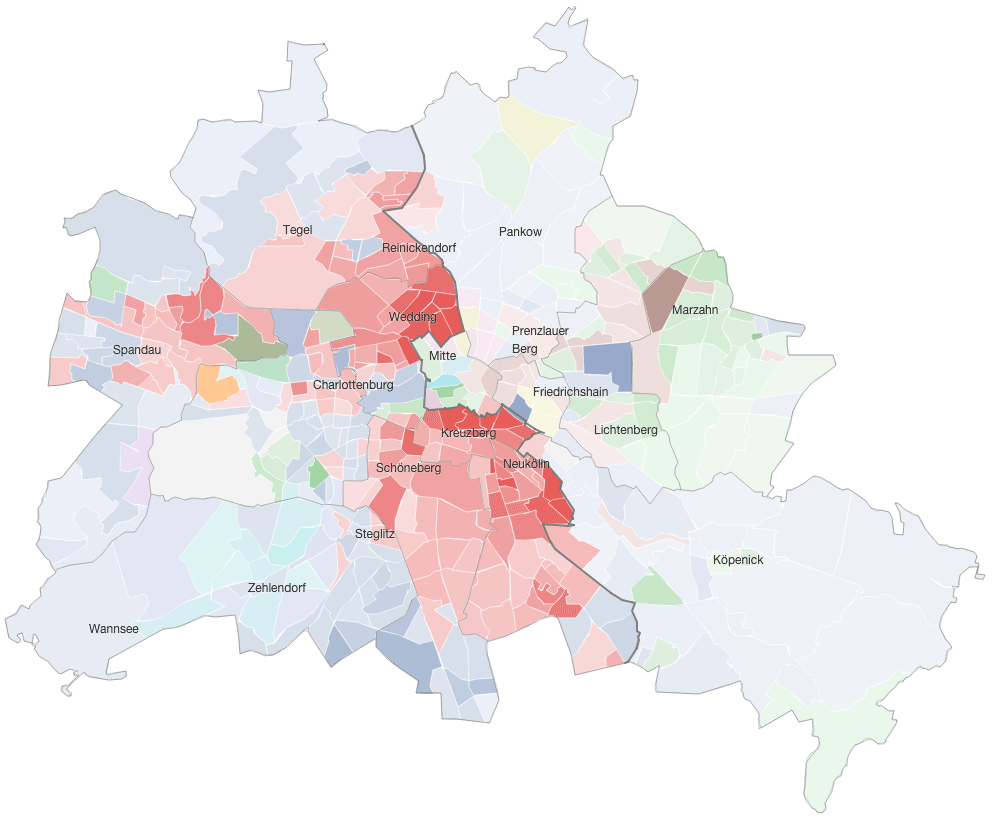 
You have just described democracy.

Which one is Leave, and which Remain?

Alternatively, get fucked by government, or fucked by corporations, take your pick.

Catching up on another case:

Meanwhile in Dresden, trial against 23-year-old Syrian Alaa S. has started on charges of having killed 35-year-old Cuban-German Daniel Hillig together with Iraqi Farhad A. (who remains at large and wanted on an international warrant) in Chemnitz last August, triggering the subsequent protests, right-wing riots and outright federal government crisis over treatment of the latter. Another Iraqi suspect was released after several weeks of remand and has since filed charges of illegal incarcaration against the responsible prosecutor and judge. A prison guard who photographed the arrest warrant against him and put it online was also put on administrative leave.

The defense of Alaa S., including a public defender who replaced a previous one fired by S. shortly before the trial, is contesting the charges, noting contradictions like that at one point the prosecution claims that both suspects stabbed the victim with two knives simultaneously, and at another that only one knife was used. Only one was found with the victim's blood on it at any rate, and no DNA evidence against S. exists. The chief witness also changed his initial statement in favor of S. on major points, and a witness also failed to identify him in court today.

In a rather overt political move, the defense additionally demanded to disclose whether any of the professional and lay judges on the court are members or supporters of the right-wings AfD, have participated in protests of the PEGIDA movement or other anti-immigration groups, on the ground of possible bias in judgement. The court has deferred the motion for later consideration for now.

S. was found guilty and sentenced to nine years six months for manslaughter and aggravated battery on Thursday. Public prosecutors had argued for ten, accessory prosecution for eleven years. The defense had pleaded for acquittal, noting there was no material evidence linking S. to the stabbing of Daniel Hillig - no DNA on the murder weapon, no bruises from a fight - and that the only witness claiming to have seen him make stabbing motions in the incident changed his statements several times. However, the court stated that those changes had been due to threats from the defendant's circle, and the testimony fit well with that of several witnesses from before and after the incident.

The defense has called the verdict a miscarriage of justice, alleging that the court acted under the pressure of public opinion and politics - the mayor of Chemnitz had stated that an acquittal would be "difficult" for her city, and the defense had unsuccessfully requested to hold the trial out of the State of Saxony - and that the prosecution was trying to make S. a scapegoat to cover up their own incompetence; they initially arrested an innocent who had to be let go after four months in remand, and let the Iraqi whose DNA actually was found on the knife slip away, still wanted on an international warrant. The case is certain to be appealed.

Meanwhile some more overall statistics: In 2018, 25.5 percent of Germany's population living in private households (this excludes people in refugee and other public shelters, barracked allied troops etc.) had an immigration background, i. e. at least one parent was born without German citizenship. This breaks down into 13.3 percent who are themselves German citizens (7.1 born in Germany, 6.2 not), and 12.2 who aren't (1.9 born in Germany, 10.3 not).