This is a republic. There is something grossly inappropriate in pharaonic monuments to politicians such as this one.

This being different from the Washington Monument, and Lincoln, Jefferson, and FD Roosevelt memorials how?

So on balance would agree or disagree with the Change culture that is attempting to remove statues of Lincoln, Jackson, Grant, and T. Roosevelt?

The movement would be better off keeping the monuments. It will regret taking them down, as doing so speeds up the process of forgetting the times in which they were raised. I don't think that will help the movement in the end.

The possibility of losing to those who do not understand this is what should be more concerning.

This being different from the Washington Monument, and Lincoln, Jefferson, and FD Roosevelt memorials how?


As much as there was a cult of Washington in the early years of the republic, I don't think the generation of the Revolutionary War would have built such grandiose monuments to individuals. Those came later.

So on balance would agree or disagree with the Change culture that is attempting to remove statues of Lincoln, Jackson, Grant, and T. Roosevelt?


I have no love for the confederacy, but allowing mobs to destroy monuments is wrong. The communities where those monuments are should make those decisions.

I think these mobs are simply trying to vilify all chapters in American history as oppressive and unjust, for very sinister reasons the general public is not seeing... Or don't want to see, lest they be called racist.

I think the movement, once it realizes what they are doing is counterproductive, will blame it on rogue actors, or Russians if they are available.

Bring the Jobs back home. Some. And some are still leaving (Harley Davidson). Net result, nope.

Get a great deal with China. Nope.

Sort out relations with Russia. Nope.

Build a wall. Nope (bits of it he has built replaced that blew down in bad weather). Any of the rest he stole from the defense budget because it abutted a military range.

Withdrawing from the South Korea and Japan. Nope.

Part of Donald's appeal was based on his private sector experience in getting things done better and faster. I don't agree with the Frontier Wire/Maginot approach to the Mexican border, but being able to point to more progress made toward building it by 2020 would have helped his reelection chances. Prior to his election, he staked his entire private sector skillset on it.

He actually the other day had the gall to bring the wall up again. Even Fox news is struggling to defend what has been achieved on the Mexican border.

As of late-June, 216 miles of new primary and secondary border wall have been built since January 2017.

So thats 339 miles that will be built  and 183 miles that might be built. How long is the border? 1954 miles. And that is apparently the most urgently required infrastructure in the country.

So thats 339 miles that will be built  and 183 miles that might be built. How long is the border? 1954 miles. And that is apparently the most urgently required infrastructure in the country.

Well, as the great Bill Burr said in 2016, by the time the wall is finished, the country will be so screwed up that people from the US will be the ones going over it.

Coincidentally, Mexico closed its border to prevent infected from the US getting in over July 4th....

As far as nuclear capabilities, yes. In part because of the INF treaty, which I think included the Scaleboards based in West Germany. As far as conventional forces, no. In fact those forces remained in East Germany till united Germany funded their return to Russia. There was some change to OOB in East Germany before the wall fell, but ive never read of anything substantive actually leading.

The USSR was always playing games like that. I remember reading back in the early 1980's they boasted they were removing an entire Tank division from Germany. Sounded great, unfortunately they just split it up and divided the tank regiments among the Motor Rifle Divisions. The numbers never changed.

Let me quote from Wiki: "Following a resolution of the government of the Soviet Union in 1979 and 1980, 20,000 army personnel, 1,000 tanks and much equipment were withdrawn from the territory of the GDR, among them the 6th Guards Tank Division, with headquarters at Wittenberg. In the course of Perestroika the GSFG was realigned as a more defensive force regarding strength, structure and equipment. This entailed a clear reduction of the tank forces in 1989. The GSFG was renamed the Western Group of Forces on 1 June 1989.[6] The withdrawal of the GSFG was one of the largest peacetime troop transfers in military history. Despite the difficulties, which resulted from the dissolution of the Soviet Union in the same period, the departure was carried out according to plan and punctually until August 1994. Between the years of 1992 and 1993, the Western Group of Forces in Germany (along with the Northern Group of Forces) halted military exercises.

The return of the troops and material took place particularly by the sea route by means of the ports in Rostock and the island of Rügen, as well as via Poland. The Russian Ground Forces left Germany on 25 June 1994 with a military parade of the 6th Guards Motor Rifle Brigade in Berlin. The parting ceremony in Wünsdorf on 11 June 1994 and in the Treptow Park in Berlin on 31 August 1994 marked the end of the Russian military presence on German soil." 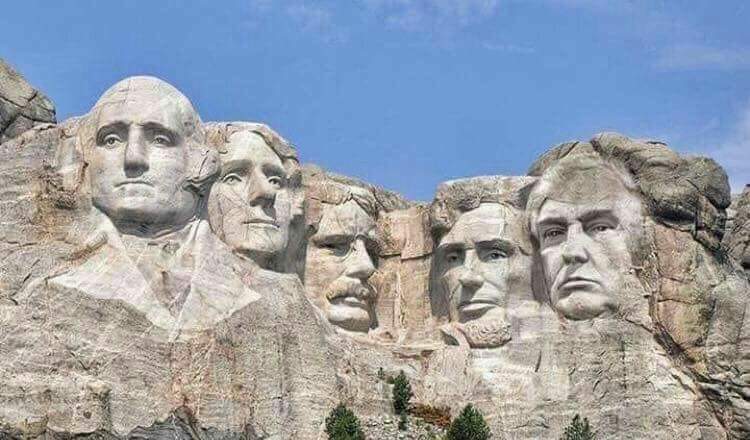 Should put Reagan in there too.

This is a republic. There is something grossly inappropriate in pharaonic monuments to politicians such as this one.

Disagree, this is not in worship of any living person and it's not to support a continuing dynasty. It's to keep us rooted in the lessons of the past so that we may learn from the bad and the good and improve as a nation and a people of ideals. Are you against any sort of statues and memorials?