If you win the lottery Thomas.....

Milo: you and Stuart had the same post. Proof that grate minds tink alike hehehehe

BTW, IR Systems >>>>> Airsoft gun systems. I have 2 1/24 tanks (Japanese Type 90 and T-72M1) and the IR system is much more fun, as are the Tamiyas when they're kitted out with it. I'll eventually buy the Chieftain kit with IR setup as well.

Hitting somebody with an invisible IR beam = 0

Does there need to be a companion thread for Godzilla suits?

I'm now looking into installing a camera on the Leo2a6 (at the sight) connected via WiFi or Bluetooth to a phone.... Hmmmmm....


Entertainment value:
Hitting somebody with an invisible IR beam = 0
Shooting your buddy square in the nuts as he walks up the steps in your front yard and your new RC tank goes tophat out of the shrubs and fires a BB = priceless

Years ago, I daydreamed of scratchbuilding an R/C scale model of an STRV-103C using a working .50 M2 as the main gun and basis for scale.

I haven't gotten my tank yet, but I've got the upgraditis bug already. I asked my friend to order a metal upgrade set of tracks (with separate rubber pads and even grousers), idlers and sprockets, and a steel gearbox for the upcoming Leo2A6. Looking to order a set of metal road wheels, return rollers, and springs too. Just saw a video of one guy who upgraded his tank as such and it fairly looks like the real thing when it runs around on terrain:

I blame that guy for the upgrade kits I'm buying.

Most militaristic person ever to dominate the battlespace

Delete. I see it will be 1/16.
Looking forward to video and review. 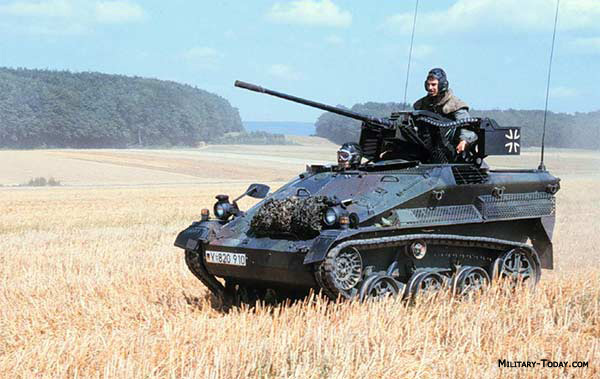 I WANT ONE SO BAD! YELLOW AND BLACK PLEASE! I SHALL NAME IT PIKACHU!

Most militaristic person ever to dominate the battlespace

Apparently, I missed the video review of the Henglong 1/16 CR2 preproduction kit. I want that lots. Oz Armour has it in Coming Soon. I read somewhere it comes out Q2 2015. So excited. Now I'm thinking which to get - the M1A2 or the CR2? WAHAHAHAHAHAHAHAHA!

If I get the CR2, I'll turn it into my 1/16 version of 11B Royal Scots Dragoons. The M1A2 I'll repaint into NATO 3-colour (am sick and tired of desert scheme already hahahahaha).

BTW, IR Systems >>>>> Airsoft gun systems. I have 2 1/24 tanks (Japanese Type 90 and T-72M1) and the IR system is much more fun, as are the Tamiyas when they're kitted out with it. I'll eventually buy the Chieftain kit with IR setup as well.

Hitting somebody with an invisible IR beam = 0

This raises an interesting point.  Airsoft guns, due to their being reproductions of real weapons, are not able to be legally owned in Australia.  Nerf guns, as they are much harder to mistake for a real weapon, are legal.

BUT, if an airsoft system was mounted in a 1/16 scale PFV  (plastic fighting vehicle....) no one could reasonably be able to say that the system could be mistaken for the real thing............

Not able to be legally owned in Oz? Sorry, I am confused. That means you cannot own ANY Airsoft gun at all unless you do it illegally? Or do you have to go through some legal process like get permits or something to legally own one?

Since I'm not big on airsoft, I am not all too familiar with owning an airsoft gun. Last I heard is one has to at least register his airsoft gun with the police, just so they know you have only a glorified toy gun that looks like the real thing, and not the real thing. Also, IIRC, they are also banned during election times, the logic IIRC is that the same can be used to threaten, deter, or compel unsuspecting voters who think it's the real thing.

Wiki sums it up nicely:

Importation of Airsoft guns – regardless of their legal status by state – requires an Australian Customs B709 Importation of Firearms – Police Confirmation and Certification Form.[1] These forms can be obtained from the relevant state's police department, however some states may require operators hold a valid license for the class of firearm wished to import before the forms will be issued. Airsoft possession is generally not considered a valid reason for obtaining a firearms license.

As a general rule, the following types of Airsoft guns are illegal in all states:

In addition, each state has its own legislation regarding possession and use of Airsoft guns:

Airsoft is regulated under the Firearms Act 1996 that classifies them as firearms which the New South Wales police do not allow any genuine reason for.

Changes to South Australian law (in particular the Firearms Amendment Act 2008) mean that Airsoft guns with a muzzle velocity of less than 175 f/s are considered "regulated imitation firearms", while those guns exceeding this limit are considered firearms. In practice both types fall under the same licensing and storage requirements,[3] as "regulated imitations" are considered de facto firearms by law; furthermore, they are considered to belong to the class of firearm they imitate − for example, a Marushin M1 Carbine would be considered a Class D firearm, as it imitates a semi-automatic center-fire rifle.[4] Regardless of this, South Australian police will refuse to register an Airsoft rifle.

Airsoft articles are not permitted in Victoria under the Victorian Legislation and Victoria Police will not issue any authorisation for their importation on the basis that no genuine reason exists to own them, because there is no approved range in Victoria.[5]

Only paintball guns are prohibited in the Northern Territory, and all other Airsoft firearms are legal with the right Firearms Licence

The ACT is governed by the Australian Federal Police; all Airsoft guns that resemble semi-automatic or automatic military rifles or shotguns adapted for military purpose are considered prohibited weapons, as are "an imitation or replica of any firearm (including an imitation or replica pistol, shortened firearm, machine gun or submachine gun) unless it is of a type approved by the Registrar".[6]

"Due to the nature of the sport of Airsoft (as with Paintball) it is classified as a ‘war game’ which is defined in the Firearms Act 1996 as a simulated military exercise or similar activity in which a firearm is used or carried by a person. Section 119 of the Firearms Act 1996 (TAS) prohibits a person from taking part in, allowing, causing, assisting or advertising or promoting any war games. As a result war games such as paintball and Airsoft are prohibited in Tasmania. It has previously been established that an Airsoft gun would be categorised as an air rifle or air pistol for which a category A (air rifle) or category H (air pistol) firearms licence would be required, however, the Firearms Act does not provide for an appropriate ‘genuine reason’ to possess a firearm for Airsoft activities, therefore an Airsoft firearm would not be able to be registered in Tasmania as the applicant could not provide a satisfactory reason for wanting to own and possess the firearm. In short, the playing of the sport of Airsoft and the possession of Airsoft firearms in Tasmania is currently banned and that position will not change in the near future." - direct quote in response to an emailed inquiry.[7]

Now before you go all bolshie about this, not too many people in Australia have even heard of airsoft and even those who have are not clamouring for the devices to be made legal.

Paintball guns, by the way, are legal if the owner is licenced by the relevant state police force.

Port Arthur hangs heavy over the Australian psyche nd it will take the passing of the generation alive in 1996 to loosen Australian gun laws.

I just find it interesting that toy guns are that controlled in Oz. Thanks Doug.

Back to Modeller's Forum