Meanwhile Back In Iraq...

Barzanistan is not good for anyone but Barzani.

The Kurds destroyed a M1 on October 20:

The Kurds destroyed a M1 on October 20:

Though they only published those images after using photos of an US-manned M1A1 lost in 2003 and a Saudi-manned M1A2 lost in 2014.  So while the kill may be genuine, the Kurds burned up some credibility in claiming it. 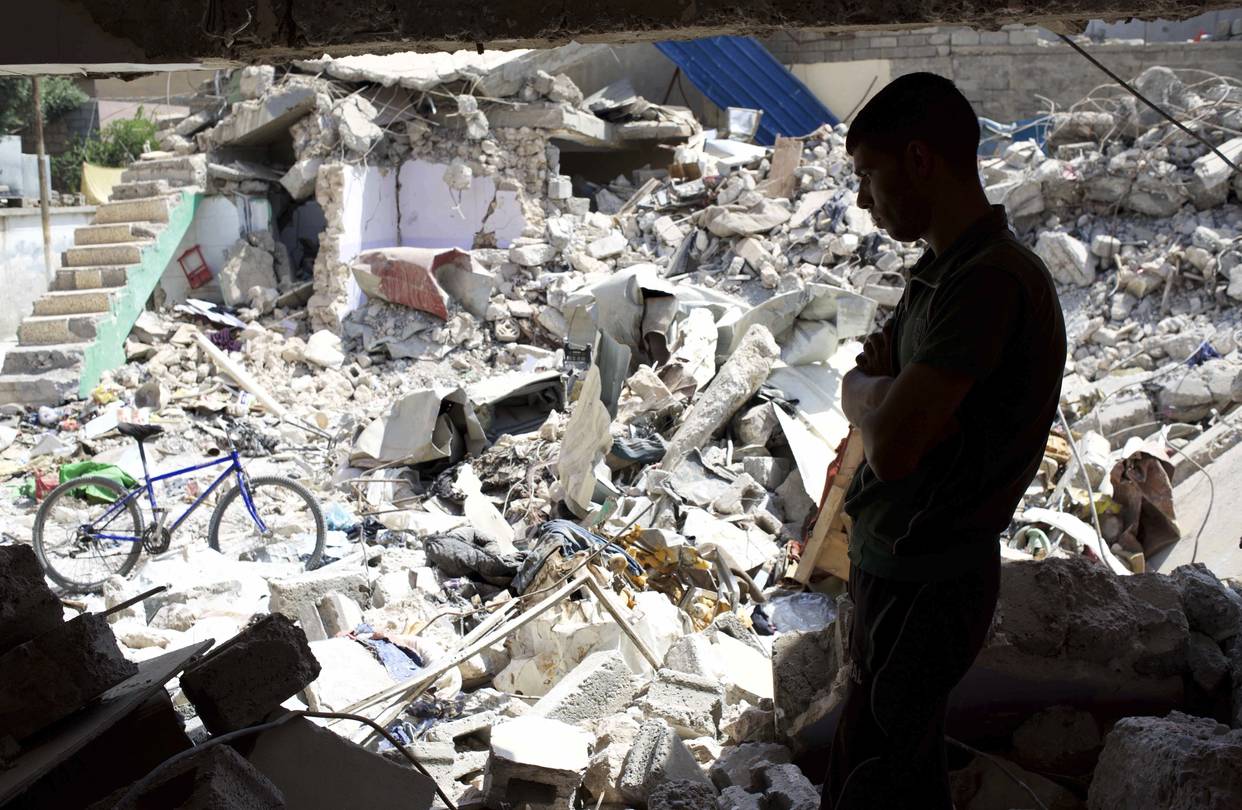 A house in Mosul was destroyed in a coalition airstrike in May that had targeted Islamic State snipers. Photo: Balint Szlanko/Associated Press
By
Michael R. Gordon
Dec. 15, 2017 5:30 a.m. ET
38 COMMENTS

WASHINGTON—American military units that participated in the decisive battle for Mosul against Islamic State militants were hampered by difficulties in sharing imagery and sometimes had different understandings of what was happening on the battlefield, according to a new U.S. Army study of the operation.

That conclusion is part of a broader military assessment that raises concerns about the military’s response to Islamic State’s drone threat, the use of private contractors, the Army’s training for urban warfare and how American forces communicated with Mosul’s trapped residents.

“A common operational and intelligence picture is critical,” the report said, referring to the problems in sharing imagery. “Different imagery databases resulted in inefficiencies and suboptimal combat effectiveness.”

It is common for the military to analyze the lessons of its operations, but its examination of the hard-fought Mosul campaign has particular relevance. The battle was a test of a new type of warfare the U.S. has employed in Iraq, Syria and Afghanistan in recent years—one in which most ground combat is done by indigenous forces with Americans providing advisers and firepower.

Prepared by American and British military officers, the study was commissioned by U.S. Lt. Gen. Stephen Townsend, who led the force that fought the militants during the Mosul campaign, which ultimately succeeded in evicting Islamic State. The Wall Street Journal reviewed an unclassified version of the report that hasn’t yet been disseminated.

Col. Mike Pappal, the director for the Center for Army Lessons Learned, said the report would be used in making decisions on the service’s training, doctrine and force structure and “will help inform and shape how we approach future conflicts.”

The American military’s name for the Mosul operation was “Eagle Strike.” When the battle began in October 2016, the mission that confronted American forces and their Iraqi partners was a difficult one. The city was defended by 3,000 to 5,000 well-armed Islamic State fighters who had more than two years to prepare elaborate defenses and was populated by hundreds of thousands of civilians.

The last neighborhoods of the city were retaken by Iraqi forces in July in a campaign that lasted nearly nine months, killed thousand of people and displaced nearly a million civilians. Though costly, the victory was a turning point that eventually led to the collapse of Islamic State’s self-declared caliphate.

American and allied efforts to advise Iraqi forces were largely successful, the report notes. Gen. Townsend’s decision to authorize U.S. personnel near the front lines to call in airstrikes facilitated many of the Iraqi gains. 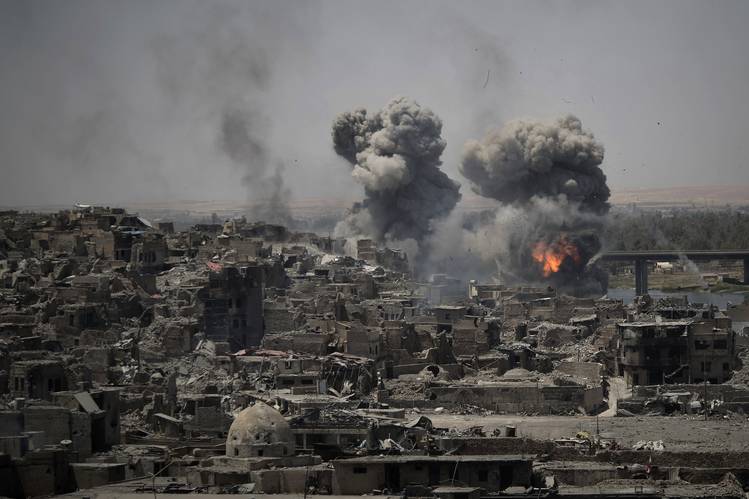 Some low tech programs helped as well. The U.S. provided armored bulldozers to the Iraqis, which they used to bust through Islamic State fortifications and clear away roadside bombs. The bulldozers were so useful that they become one of the militants’ main targets.

But the report, which focused more on battlefield tactics than the development of the overall strategy, identified significant deficiencies as well. The Army, it noted, was slow to respond to the threat posed by Islamic State’s drones. “The U.S. Army lacks a comprehensive approach to urgent, emerging battlefield challenges,” the report state.

Another potential vulnerability was the Army’s reliance on contractors, the report notes. Private contractors have played an important role in logistical support, but they have generally operated in rear areas. The study questioned whether it is too risky to use them to service teams of military advisors on a dangerous battlefield.

“The U.S. Army needs to reconsider the risks associated with continued use of contractors in expeditionary warfare,” the report states.

The Army’s standard training for urban warfare, the report added, didn’t adequately replicate the difficulty in maneuvering through Mosul’s narrow streets against a dug-in and well armed enemy. “Urban training scenarios are too limited and sterile to replicate conditions such as those experienced in Mosul,” it states.

The intense fighting inside Mosul also posed a challenge for medical care. It was difficult for Medevac helicopters to land safely in the city and the rubbled streets sometimes made it hard to transport the wounded by vehicle. As a result, surgical hospitals may need to be closer to the front lines.

American airpower was critical in enabling Iraqi forces to advance but in the eyes of critics also collapsed buildings, resulting in numerous civilian casualties. The unclassified Army report doesn’t scrutinize how airpower was used, but asserted there are “open questions” whether the munitions dropped by aircraft or launched from the ground were the most effective “for targets in dense urban terrain.”

The study is sharply critical of the use of leaflets to communicate with Mosul’s civilians. Many of the leaflets weren’t tailored for the tribes and communities that might received them. Other leaflets failed to reach their target audience because the Iraqi military wasn’t properly instructed on where to drop them. When they did reach their mark, the consequences were sometimes disastrous.

“When leaflet drops were successfully deployed into an area, the risk to people was high,” the study stated. “If an attempt was made by a civilian in Mosul to pick up a leaflet in the street, it could be answered with a bullet from an [Islamic State] sniper.”

Developing a common understanding of the fast moving developments on the battlefield was another challenge. American special operations forces had an effective system for using and analyzing imagery. But the data the rest of the military relied on was not always consistent. Valid targets were sometimes questioned because of outdated imagery. Forced to improvise, advisers in the field sometimes sent “screen shots of imagery to collaborate with higher headquarters and coalition partners.”

Behind the president’s directive to ‘accelerate’ the counter-ISIS campaign came a surge in the number of contractors assisting in the campaign against ISIS.

The number of private contractors working for the U.S. Defense Department in Iraq grew eight-fold over the past year, a rate that far outpaces the growing number of American troops training and advising Iraqi soldiers battling Islamic State militants.
The sharp increase, disclosed in a recent Pentagon report to Congress, underscores the military’s reliance on civilians even for missions with relatively small troop presence.
“If you look at the size and the composition of the forces that have been deployed in support of Operation Inherent Resolve, that’s changed markedly in the past year,” said Rick Brennan, a senior political scientist at the RAND Corp. and a retired Army officer.
As of January, 2,028 contractors were in Iraq, up from just 250 one year earlier, according to the Pentagon’s data. There are roughly 3,700 American troops there now, compared to 2,300 in January 2015.

It seems Iraqi M1s has lost any US maintenance support.

It seems Iraqi M1s has lost any US maintenance support.

Most likely the Iraqi Army will regain control of the remaining errant M1A1, though that may not happen till after the elections.  Most likely the PMU unit in question will be given a pair of T-90s as their Baksheesh.

(The preceding is just my own speculation and should not be regarded as authoritative.)

Hey, Stuart, you said that Iraqi Su-25 will be useless and take ages to get operational? 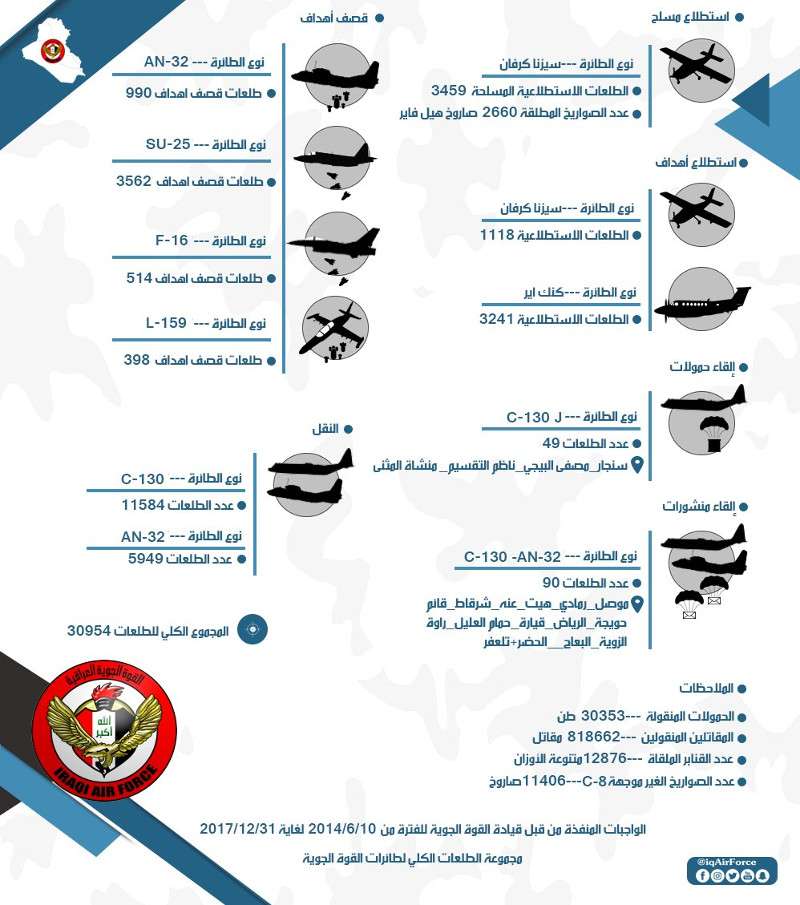 Well, some of those Su-25's were Iranian, fresh off from squadron duty there...

But yes, remarkable amount of sorties compared to to other fast jet types. F-16 induction was of course bit slow, and L-159 only arrived in 2016.

Not sure what all those categories are, but Cessna Combat Caravans seem remarkable active as well.

Could you please elaborate more on "An-32 as bomber"?

Article says everything you want to know.

Every post ww2 Soviet transport plane could mount hardpoints and haul bombs. Optical gunsight was also available to be mounted in navigator's side window. Iraquis were quite desperate at one moment, so they used opportunity. They also acquired weapon packages for Lasta trainer they and flew those also as light strike aircrafts. Such a Soviet/Russian solution, not meant in a bad way either.

They always get the most bang for the least buck.

Lies. Those were obviously IRGCAF sorties.

You may have to wait a little while for that

Oh the irony, US actually enabled Iran to control Iraq... 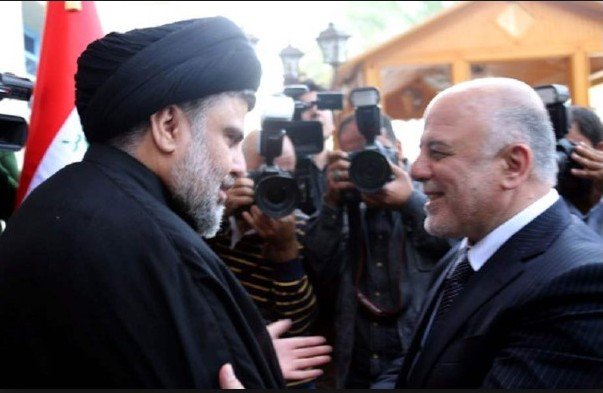