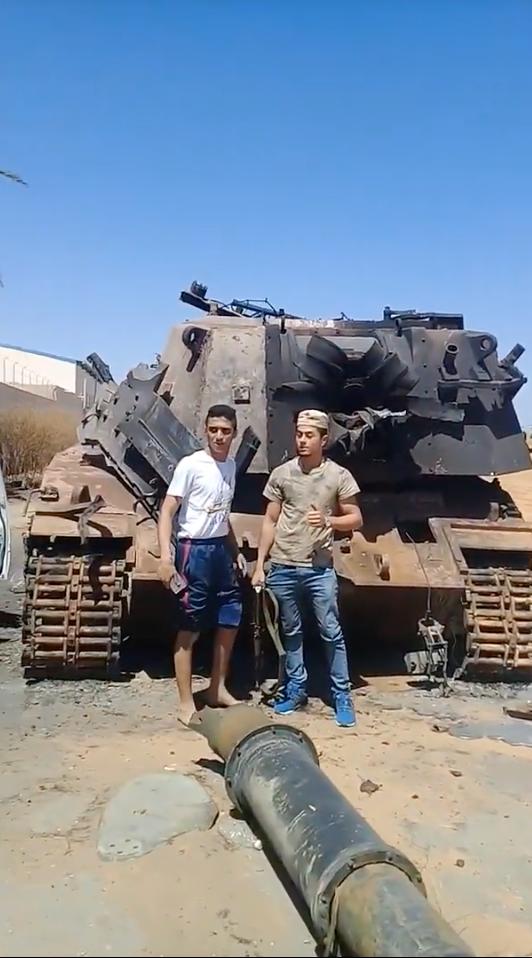 Head of the Libyan National Army Khalifa Haftar has ordered his forces to attack Turkish ships and interests in the country, his spokesman said on Friday, accusing Turkey of being actively involved in battles.

“Orders have been given to the air force to target Turkish ships and boats in Libyan territorial waters,” said General Ahmad al-Mesmari, adding that “Turkey provided air cover using drones during the militia invasion of Gharyan city.”

The spokesman accused Turkey of helping Haftar’s rivals- the Government of National Accord (GNA)- seize the town of Gharyan, around 100 kilometers (around 60 miles) southwest of Tripoli.

Turkish strategic sites, companies and projects belonging to the Turkish state (in Libya) are considered legitimate targets by the armed forces.”

Haftar’s Libyan National Army, which holds eastern Libya and much of the country’s south, launched an offensive to take the capital in early April.

Libya has been mired in chaos since a NATO-backed uprising that toppled and killed dictator Muammar Qaddafi in 2011, with a multitude of militias vying for control of the oil-rich country.

Haftar, a retired general who had taken part in the revolt against Qaddafi, unleashed an offensive in May 2014 to purge Libya of Islamists he branded “terrorists.”

Mesmari added “all Turkish nationals on Libyan territory will be arrested” and “all flights to and from Turkey will be banned.”

He did not explain how the flight ban could apply to areas not under Haftar’s control.

The Libyan Army's Volcano of Rage Operation of the Presidential Council has announced shooting down a Chinese Wing Loong drone provided by the UAE to Khalifa Haftar's forces in the area between Abu Grein and Al-Wishka, southern Misrata.

The media office of the operation said that the Air Force of the Libyan Army intercepted the UAE's drone and shot it down.

It said that Haftar's warplanes tried to strike the downed drone in order to wipe out evidence about its type, but eastern and southern frontlines' forces foiled the attempts.

The shooting down of the drone is a critical U-turn as it shows Libyan Army as ready to deprive Haftar's forces of their airpower that has caused lots of damage in civilian lives and properties in southern Tripoli.

Meanwhile, Haftar's forces retaliated for the drone loss by shelling Mitiga Airport in Tripoli with Grad rockets, leading to suspension of flights, according to the Airport's management.

The flights resumed hours later after no damage was reported.

According to a military source, the source of the shelling was coming from Khalit Al-Furjan in southern Tripoli. 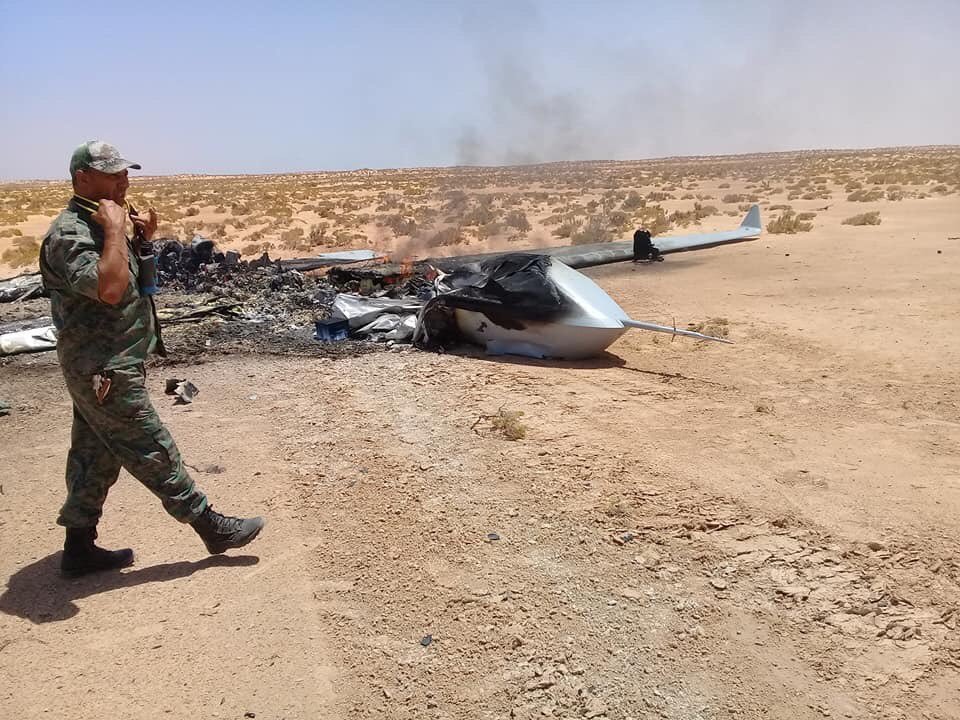 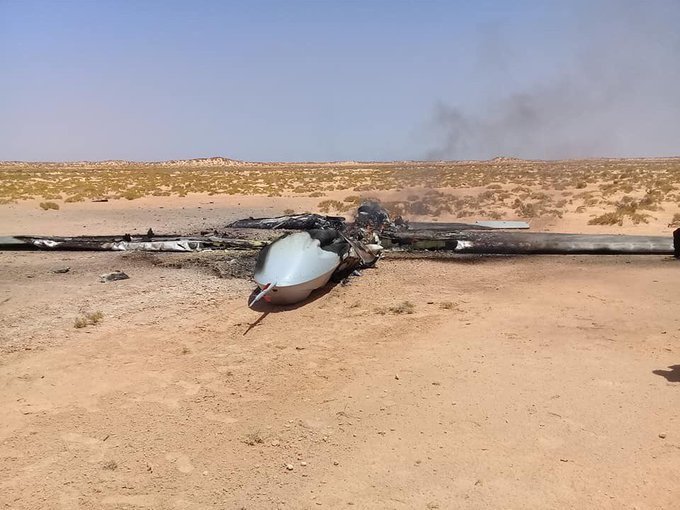 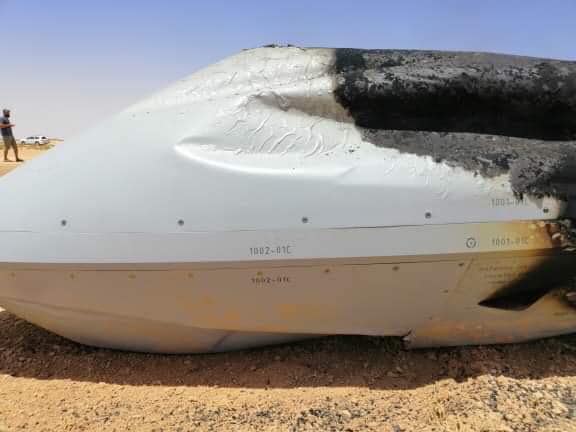 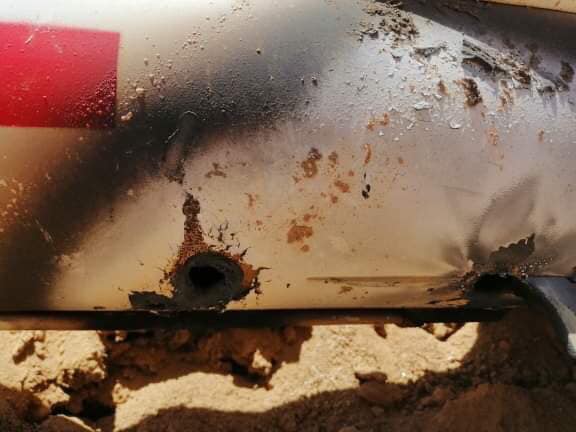 Interesting that it came down in one piece. I like it's other name more: Chengdu Pterodactyl I

It looks like it took some kind of light cannon fire that disabled it with minimal damage (23mm?). The fire seems to be something that happened after the crash opened up the fuel tanks.

I wonder whether such incidents are covered by the plane’s insurance. Utterly bizarre that GNA supporters sent another plane when Haftar had already shown he is willing to destroy foreign aircraft delivering supplies to his opponents.

There was a lot of cargo planes destroyed on tarmac in Libya over the last few weeks, including the sole remaining Libyan Antonov An-124.

AL AZIZIYAH, Libya — At first, the fighters inside the empty school building, about 20 burly, heavily armed Russian mercenaries in dark fatigues, seemed trapped, recalled some of the Libyan militiamen who were there.

But as the Libyans pushed forward, snipers opened fire from inside with high-powered rifles. Within minutes, three Libyan militiamen were killed, all shot in the head.

Hundreds of Russian mercenaries, many highly trained and well-armed, are fighting alongside renegade Libyan commander Khalifa Hifter as he seeks to oust the country’s United Nations-backed government, according to Libyan military commanders and fighters, as well as U.S. military and other Western officials.

These foreigners fighting for Hifter’s self-described Libyan National Army are introducing new tactics and firepower on the battlefield, threatening to prolong the most violent conflict in this North African country since the Arab Spring revolution eight years ago.  “The entry of the Russian forces into the war has altered the battlefield,” said Osama al-Juwaili, a top commander of the Libyan government’s forces. “Their presence complicates things for us.”

They represent the latest escalation in Libya’s proxy war, which has drawn in European and Arab countries — notably the United Arab Emirates and Egypt — despite an international arms embargo. And the arrival of these mercenaries comes at a time when Russia has been expanding its military and diplomatic reach across the Middle East, Africa and beyond, enjoying greater clout in places such as Syria where the United States is disengaging.

“We are aware of Russian private military companies operating in Libyan National Army-controlled territory in eastern Libya, and they have also operated in western Libya,” said Rebecca Farmer, a spokeswoman for the U.S. military’s Africa Command.  Farmer said the Russian mercenaries work for the Wagner Group, a private army that experts have linked to Yevgeniy Prigozhin, a close ally of Russian President Vladimir Putin. The Wagner Group has previously appeared in combat in Syria, the Central African Republic, Ukraine and other countries considered strategic for the Kremlin’s geopolitical and economic interests.  Russia has arms and construction agreements worth in excess of $4 billion, made with late Libyan dictator Moammar Gaddafi, who was ousted and killed in the country’s 2011 uprisings and NATO intervention.

“They have a strong economic rationale in their continued support to Hifter,” said Farmer, referring to Moscow.  In addition to the United Arab Emirates and Egypt, Saudi Arabia is backing Hifter, as is France. Italy and other European nations, as well as Turkey and Qatar, are supporting the Tripoli-based government. U.S. policy has been uncertain since April when President Trump endorsed Hifter’s offensive in a telephone call.  The former Soviet Union had a close relationship with Gaddafi, sending weaponry and military advisers to Libya throughout the 1970s and 1980s.

In Hifter, Moscow sees an opening to gain back billions in lucrative oil and military contracts that it lost when Gaddafi was killed, analysts said. Russia has printed billions of Libyan dinars to prop up eastern Libya’s economy and help finance Hifter’s military campaign. Russia has also blocked a U.N. Security Council statement that sought to condemn Hifter’s offensive.

Turkey have to run to help the UN-approved government

I've seen a report that different NATO countries are backing different factions in Libya.  Specifically France and Russia backing one side, Italy another.  Any idea what's going on?   Seems confusing.

I've seen a report that different NATO countries are backing different factions in Libya.  Specifically France and Russia backing one side, Italy another.  Any idea what's going on?   Seems confusing.

Russia seems to bank on Haftar renewing the contracts that Khadaffi made with Russian companies, and Turkey seems to turn the Meditterranean into a "mare nostrum", but what France and Italy hope to gain (or avoid) is unclear to me.

I think he might mean that back before 1945 the French and Italians were competing for influence in North Africa?  I must admit, when I first read the report that thought popped to mind.

Ah yes, the old rivalry in the med raising its head.

Merkel: Germany to host Libya peace conference
German chancellor stressed Libya's warring parties would need to play an important role to help find a solution.
2 hours ago
German Chancellor Angela Merkel has said Libyan peace talks will be held in Berlin, as Turkey and Russia appeal to Libya's warring factions to enter a ceasefire.
During a joint news conference with Russian President Vladimir Putin in Moscow on Saturday, Merkel said: "We hope that the joint efforts by Russia and Turkey will lead to success, and we will soon send out invitations for a conference in Berlin."
Merkel stressed that the United Nations would lead talks if a meeting were to take place in Berlin and that Libya's warring parties would need to play a significant role to help find a solution.
The aim was to give Libya the chance to become a sovereign and peaceful country, Merkel said.
Putin expressed support for the process, saying it was a "timely" idea and necessary to bring the conflict in Libya to an end.
READ MORE
Turkey asks Russia to get Libya's Haftar to accept ceasefire
Earlier this week, Turkey and Russia urged Libya's warring parties to declare a ceasefire on Sunday.
Turkey backs Fayez al-Sarraj's Tripoli-based, internationally-recognised Government of National Accord (GNA) and has said it will send military advisers and possibly troops to reinforce its support.
Russian military contractors have been deployed alongside renegade military commander Khalifa Haftar's eastern-based Libyan National Army (LNA).
In response to being asked whether he was aware of the presence of Russian mercenaries in Libya, Putin said: "If there are Russian citizens there, then they are not representing the interests of the Russian state and they are not receiving money from the Russian state."
SOURCE: NEWS AGENCIES

The comments on that video suggests an oil dispute (Total vs Eni). But I suppose Russian and Turkish companies would take precedence for their respective sides, considering they are more openly supportive.

France does have some ties with Egypt though, that may be part of the reason. Italy seems to be following the standard UN/European response with the GNA as the "official" government.

If the goal is to stop the flow of immigrants (surely an Italian aim), I wonder if Haftar wouldn't be easier to deal with instead of the fractured GNA.