YouTube pulled the video, but Jane's has some stills from it:

The article goes on to say that the Houthis claim to have adapted a number of S-75 SAMs to serve as ballistic missiles.  They claim this last image is the launch of an S-75 in that role:

YouTube pulled the video, but Jane's has some stills from it:

The article goes on to say that the Houthis claim to have adapted a number of S-75 SAMs to serve as ballistic missiles.  They claim this last image is the launch of an S-75 in that role:

It would make sense if the Saudi Ministry of Defense is fully aware of the incapability of their army, and the intention is to get the kind of improvement that the likelihood of actual combat generally inspires.  The Houthis have now made a nice series of "how-not-to-do it" training films for them.

little mix-up in video title? - ´´yemen hussites took  tank from saudis and blew it up´´

little mix-up in video title? - ´´yemen hussites took  tank from saudis and blew it up´´

No mix-up. Hussites-the-Czech are "Гуситы" in Russian (First sound like in "Goose" word), while Hussites from Yemen are "Хуситы" like "Home". https://en.wikipedia.org/wiki/Houthis

It really should omit the i between Xhus and toi. They now control the Yemen side Bab el Mandab and can potentially close it to Saudi allied traffic with their C-802s.

It really should omit the i between Xhus and toi. They now control the Yemen side Bab el Mandab and can potentially close it to Saudi allied traffic with their C-802s.

Not without air superiority they can't, given that their launchers can't venture out from cover for very long.

Did this get liveleaked ? Video is down on FB.

What I should see? Clearly it was not made with ISIS HD camera equipment...

Love how the Israelis get blamed in their chants, meanwhile the Israelis are like, WTF, we don't give a shit about your little war?

The Houthi motto is "God is Great, Death to America, Death to Israel, Curse on the Jews, Victory to Islam".
Apparently the Gulf Arabs are all puppets of Israel and the Jewnited States so therefore covered.

He said air strikes had caused almost all the coalition's civilian casualties.

More than 6,000 people, about half of them civilians, have been killed since Saudi Arabia launched a multi-national campaign against rebels in March 2015.

Mr Hussein's comments come three days after some 106 civilians were killed in what medics and witnesses said was an air strike on a market in Mastaba, north-west Yemen, in one of the deadliest incidents of the war.

The UN said staff who had visited the scene of the attack said, apart from a check-point about 250 metres (820 ft) away, there was no evidence it was a military target.

"Looking at the figures, it would seem that the coalition is responsible for twice as many civilian casualties as all other forces put together, virtually all as a result of air strikes," Mr Hussein said.

"They have hit markets, hospitals, clinics, schools, factories, wedding parties - and hundreds of private residences in villages, towns and cities including the capital, Sanaa."

"Despite plenty of international demarches, these awful incidents continue to occur with unacceptable regularity."

Saudi Arabia said it was investigating the attack on Mastaba, adding its forces had targeted a "gathering area" for Houthi rebel fighters about six miles (10km) away.

Zeid Raad Al Hussein however said coalition forces appeared not to have taken proper steps to distinguish between military and civilian targets, adding both they and the rebels might have committed "international crimes".

The coalition launched its offensive last March with the aim of repelling the rebels and restoring exiled President Abdrabbuh Mansour Hadi to power.

British exports of weapons, such as Paveway-IV missiles, to Saudi Arabia under heat because of Saudi's recent bombing campaign style.

Campaigners on Friday delivered fake missiles to Downing Street to protest Britain’s continued supply of arms to Saudi Arabia, despite concerns that they are being used against civilians in Yemen.

The British government conceded that UK-supplied defense equipment has been used in the campaign, but said it has “one of the most robust arms export control regimes in the world.”

It said it has raised allegations of civilian targeting with the kingdom, but refused a call last month by parliament’s international development committee to suspend exports until the matter can be properly investigated.

Under Britain’s arms export criteria, licenses cannot be granted if there is “a clear risk that the items might be used in the commission of a serious violation of international humanitarian law.”

The British government approved nearly ￡3 billion (US$4.34 billion) of arms licenses for exports to Saudi Arabia in the six months to January, according to the international development committee.

“It is absolutely shocking that the UK is still selling billions of pounds’ worth of weapons to Saudi Arabia even as the civilian casualties have mounted and mounted in Yemen,” Allen said.

A second parliamentary committee, on arms export controls, last week launched an inquiry into the use of British manufactured arms in Yemen, and is to hold its first evidence session next week.

British non-governmental organization Campaign Against Arms Trade is also pursuing legal action against the government in a bid to suspend exports.

A WWII vintage US M2A1 105mm howitzer returned to service in Yemen, with a Toyoda pickup truck as its prime mover: 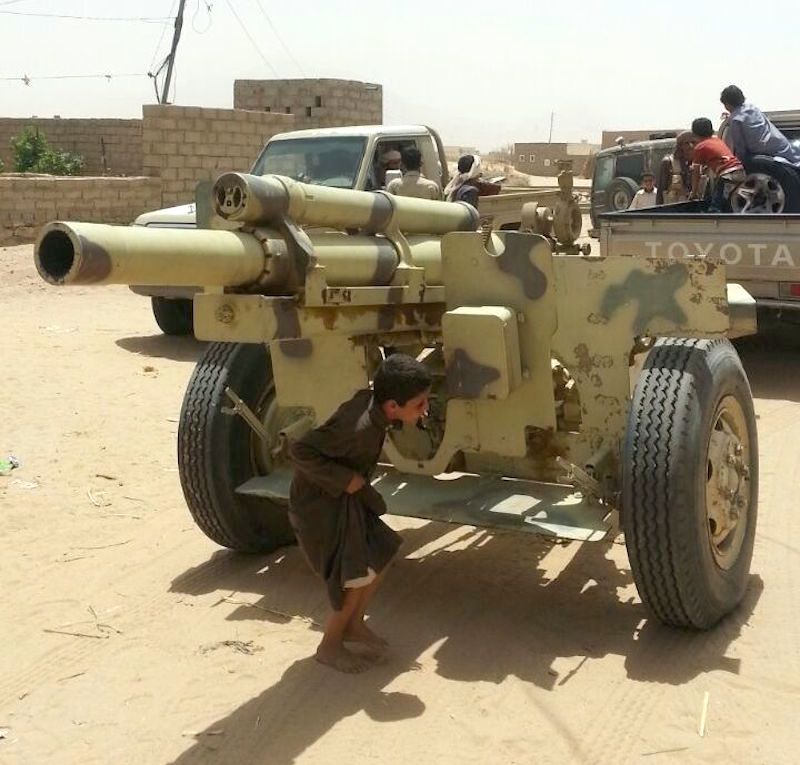 Still in service in Canada