I thought I'd just get this topic started ahead of time in case I was busy tomorrow.

The US, RoK, and Jpn will be ready.

South Korea, the United States and Japan on Friday began a three-day naval exercise designed to counter North Korean missiles amid growing indications that Pyongyang is ready to test-fire an intercontinental ballistic missile in time for Donald Trumps inauguration as US president.

The military drill is designed to improve combined capability to detect and trace North Korean missiles such as the ICBM, for which Pyeongyang claimed to be in a final stage of deployment. The three countries held similar exercise in June and November last year.

The military drill takes place in the waters of the three countries, a Navy official familiar with the matter said on the condition of anonymity. The drill will use hypothetical targets to track, detect and share information (about the missiles).

The announcement came amid a renewed threat from Pyeongyang to launch ICBM.

Its state-run Rodong Sinmun newspaper said that they can test-fire the missile at any time and place and that the move is a self-defense step to counter the US threat of a nuclear war against the North.

A day earlier, Seouls military said that the North has probably built two missiles presumed to be ICBMs. The two missiles are estimated to not exceed 15 meters in length, making them shorter than the Norths existing ICBMs, the 19-20 meter-long KN-08 and the 17-18 meter-long KN-14.

"We have yet to confirm immediate indication that the Transporter Erector Launcher suspected of carrying ICBM has been moved to a launch site," said an anonymous military official on Friday. "We are closely watching the Norths ICBM movement."

Pentagon press secretary Peter Cook, meanwhile, said that the US is prepared for missile threats from North Korea, reiterating its pledge to shoot down missiles coming from the North toward Washington and its allies --- if the missiles constitute a threat to them.

Later than thought but they just launched.

North Korea fired a ballistic missile into the Sea of Japan early Sunday as U.S. President Donald Trump met with Prime Minister Shinzo Abe in Florida. The test was the North’s first such launch since Trump was sworn into office on Jan. 20.

The two leaders responded in a united, albeit vague, manner to the launch.

“President Trump has just made it clear in our leaders’ summit that the United States is with Japan 100 percent at all times, and he is standing next to me right now in order to demonstrate that will,” Abe said in an impromptu joint press announcement following their working dinner at Trump’s Mar-a-Lago vacation estate in Florida.

Trump refrained from mentioning North Korea or the missile launch of a few hours earlier, uttering only a single comment about the United States standing by Japan.

“I just want everybody to understand and fully know that the United States of America stands behind Japan, its great ally, 100 percent,” Trump said.

Abe and Trump had been having dinner at Trump’s vacation estate in Palm Beach, Florida, having spent the day playing golf nearby.

Shortly before the dinner, the South Korean military said North Korea had fired a ballistic missile in the direction of the Sea of Japan.

In Tokyo, the Japanese government condemned the launch as a clear violation of U.N. Security Council resolutions and said it has issued a strongly worded protest over the test.

“The ballistic missile launch is an extremely problematic act from the viewpoint of securing the safety of aircraft and ships and it is an obvious violation of U.N. Security Council resolutions,” Chief Cabinet Secretary Yoshihide Suga told a news conference, adding that the missile appeared not to have landed in Japan’s exclusive economic zone or to have caused any damage.

The type of missile, launched from the Banghyon area in North Korea’s western North Pyongan province at around 7:55 a.m., has not yet been identified, the Yonhap news agency quoted South Korea’s Joint Chiefs of Staff as saying in a statement. It flew about 500 km (300 miles), the statement said, adding that it did not appear to be an intercontinental ballistic missile (ICBM).

“Our assessment is that it is part of a show of force in response to the new U.S. administration’s hard-line position against the North,” the JCS statement said, according to Yonhap.

The U.S. military also said it had detected a missile test launch by the North and is assessing it, a U.S. defense official told The Japan Times by email.

North Korean leader Kim Jong Un said in his New Year’s Day address that the country was close to launching an ICBM — remarks widely seen as a veiled threat that the hermit nation was close to mastering the technology needed to strike the continental United States.

In response to the ICBM claim, Trump vowed last month to halt the North’s push, writing on Twitter that Pyongyang’s development of a nuclear missile capable of hitting the U.S. “won’t happen.”

The new U.S. leader, however, did not provide any details of how he will rein in Pyongyang’s nuclear and missile programs.

Sunday’s test comes after Trump’s summit with Abe, where the two agreed to work to ensure a strong defense against the North Korean threat. It also comes after U.S. Defense Secretary James Mattis, during a visit to Seoul, said any use of nuclear weapons by North Korea will be met with an “effective and overwhelming” response.

In conversations involving both President Barack Obama and Trump and his transition team over the last several months, media reports characterized the outgoing administration as voicing a sense of urgency on North Korea, labeling it the top national security threat facing the U.S.

The pointed remarks by Mattis likely signal a shift from that of the Obama administration, which oversaw a policy of “strategic patience” in which Washington attempted to wait out a sanctions-crippled and recalcitrant Pyongyang.

That policy, observers say, has largely failed to halt the North’s progress on its nuclear and missile programs. Last year, it conducted more than 20 missile launches as well as two atomic tests — including its most powerful to date.

Later than thought? Probably took a while to dry out the fuse.

Wonder how long its going to take before someone makes noises about reactivating ABL...

They got a new fuze to dry 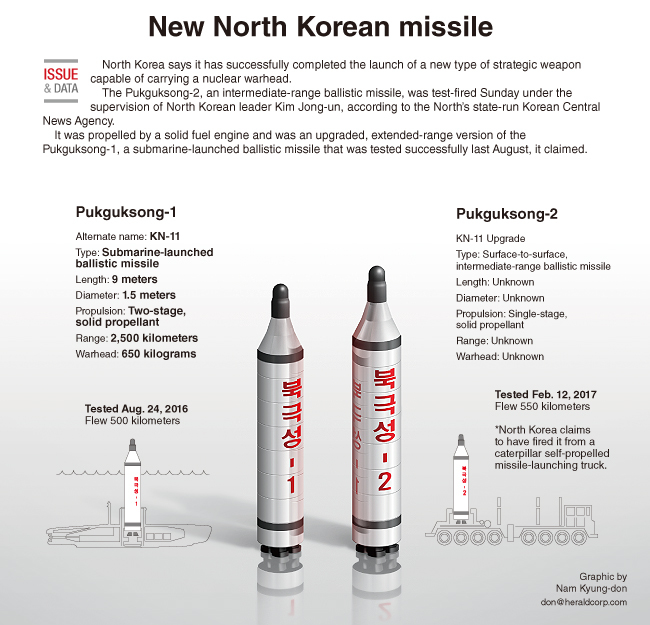 North Korea says it has successfully completed the launch of a new type of strategic weapon capable of carrying a nuclear warhead.

The Pukguksong-2, a medium long-range ballistic missile, was test-fired Sunday under the supervision of North Korean leader Kim Jong-un, according to the North’s state-run Korean Central News Agency.

It was propelled by a solid fuel engine and was an upgraded, extended-range version of the Pukguksong-1, a submarine-launched ballistic missile that was tested successfully last August, it claimed. 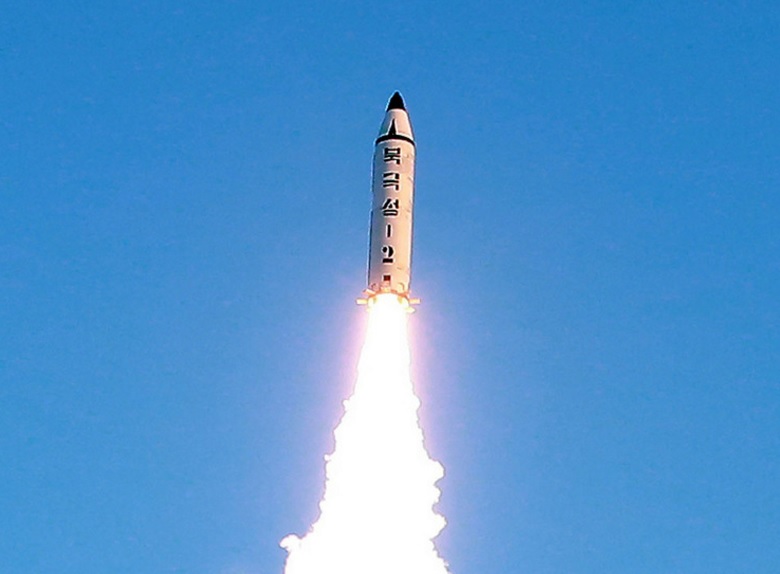 Yes. The "Puk" part means "north" and is also used in the name for "North Korea"... 북조선

California. Tell them there is a Mambo Dong on the way and it wont cause any alarm.

Sorry about the Keyboard btw.


Japan is east of Korea for starters. And actually threatening the USA is the long term goal as they regularly spout in their propaganda.

Can't think of anyone they'd aim at West. China is North, ROC is South, everyone else is East. Pretty much everyone is in easy range of practically any ballistic missile except the Running Dogs themselves, so I agree with the California comment.

North Koreans make easy targets for jokes, but this missile is actually frst which has potential to be serious, relatively modern missile with operational value. Their earlier strategic missiles can be described as pure test articles or at best stunt weapons which estabilish mostly theoretical deterrent.

Well they are a bunch of juche bags.

Juche is bad but we can't have a juche gap!

It seems to me that positioning a taskforce with a SM-3 equipped ship a few hundred miles off Nork coast and plinking their Pukguksong-2 rockets would be a very good way to deny Norks data needed to perfect their ICBM program.